Romeritos is a Mexican dish from Central Mexico, [1] consisting of tender sprigs of seepweed (Suaeda spp.) which are boiled and served in a mole sauce seasoned with shrimp jerky blended into the mix. Typical additional ingredients include boiled potatoes, nopales and re-hydrated shrimp. They are usually served with patties of dried shrimp [2] with bread slices and in tacos. They are traditionally enjoyed at Christmas and Lent.

The type of seepweed used depends on the region. The plant is known as romerito in Spanish. That name in English means "little rosemary"; some seepweed species can vaguely resemble such plant when fresh but neither taste nor smell similar in any way.

Shrimp paste or shrimp sauce is a fermented condiment commonly used in Southeast Asian and Southern Chinese cuisines. It is primarily made from finely crushed shrimp or krill mixed with salt, and then fermented for several weeks. They are either sold in their wet form or are sun-dried and either cut into rectangular blocks or sold in bulk. It is an essential ingredient in many curries, sauces and sambal. Shrimp paste can be found in most meals in Indonesia, Laos, Malaysia, Myanmar, the Philippines, Singapore, Thailand, and Vietnam. It is often an ingredient in dip for fish or vegetables. 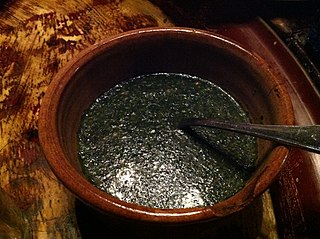 Mulukhiyah or mulukhiyyah is the leaves of Corchorus olitorius, commonly known as Jew's mallow, Nalta jute, or tossa jute. It is used as a vegetable. It is popular in Middle East, East African and North African countries. Mulukhiyah is rather bitter, and when boiled, the resulting liquid is a thick, highly mucilaginous broth; it is often described as "slimy", rather like cooked okra. Mulukhiyah is generally eaten cooked, not raw, and is most frequently turned into a kind of soup or stew, typically bearing the same name as the vegetable in the local language. Traditionally mulukhiyah is cooked with chicken or at least chicken stock for flavor and is served with white rice, accompanied with lemon or lime. 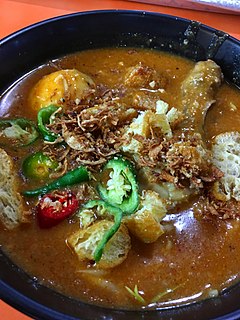 Mie rebus/Mi rebus or mee rebus, literally "boiled noodles", is a noodle soup dish from Indonesia, and popular in Indonesia, Malaysia, and Singapore. It is also often called mie kuah.

Suaeda is a genus of plants also known as seepweeds and sea-blites. Most species are confined to saline or alkaline soil habitats, such as coastal salt-flats and tidal wetlands. Many species have thick, succulent leaves, a characteristic seen in various plant genera that thrive in salty habitats. 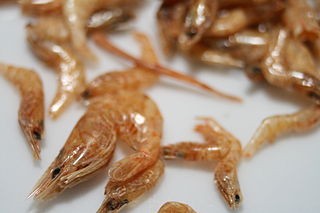 Dried shrimp are shrimp that have been sun-dried and shrunk to a thumbnail size. They are used in many East Asian, Southeast Asian and South Asian cuisines, imparting a unique umami taste. A handful of shrimp is generally used for dishes. The flavors of this ingredient are released when allowed to simmer.

Saunders's gull or the Chinese black-headed gull is a species of gull in the family Laridae. It is found in China, Hong Kong, Japan, North Korea, South Korea, Macau, Russia, Taiwan, and Vietnam. Its natural habitats are estuarine waters and intertidal marshes. As with many other gulls, it has traditionally been placed in the genus Larus, but based on phylogenetic work some have moved it to Chroicocephalus, while others argue it is sufficiently distinct for placement in the monotypic Saundersilarus. It is threatened by habitat loss. One of its few remaining strongholds are the Yancheng Coastal Wetlands, which hosts about 20% of the world's population. 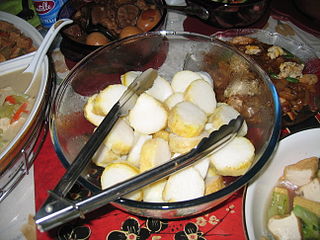 Lontong is a Indonesian dish made of compressed rice cake in the form of a cylinder wrapped inside a banana leaf, commonly found in Indonesia, Malaysia and Singapore. Rice is rolled inside a banana leaf and boiled, then cut into small cakes as a staple food replacement of steamed rice. The texture is similar to those of ketupat, with the difference being that the ketupat container is made from weaved janur fronds, while lontong uses banana leaf instead.

Perennial vegetables are vegetables that are perennial, meaning the plants can live for more than two years.

Lalab or lalap is a Sundanese raw vegetable salad served with sambal terasi. It is a popular Sundanese vegetable dish originated from West Java, Indonesia.

Suaeda calceoliformis is a species of flowering plant in the amaranth family known by several common names, including Pursh seepweed and horned seablite.

Suaeda nigra is a species of flowering plant in the amaranth family known by the common names Mojave sea-blite and bush seepweed.

Suaeda vera, the alkali seepweed or shrubby sea-blite, is a species of flowering plant in the family Amaranthaceae. It is a coastal species found particularly where shingle and salt marsh meet.

Crayfish are eaten all over the world. Like other edible crustaceans, only a small portion of the body of a crayfish is edible. In most prepared dishes, such as soups, bisques and étouffées, only the tail portion is served. At crawfish boils or other meals where the entire body of the crayfish is presented, other portions, such as the claw meat, may be eaten. 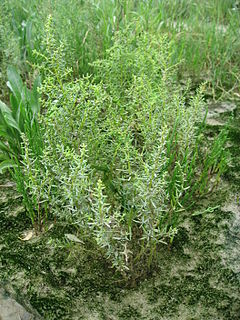 Suaeda maritima is a species of flowering plant in the amaranth family known by the common names herbaceous seepweed and annual seablite. It is a yellow-green shrub with fleshy, succulent leaves and green flowers. It grows to about 35 cm in salt marshes.

Suaeda pulvinata is an endemic seepweed from Mexico. It lives in the shores of Lake Texcoco and Lake Totolcingo. It lives underwater as an aquatic plant for half of the year and in dry land as a terrestrial plant for the other half due to the changing levels of the lakes that it inhabits. It is a perennial flat herb with prostrate stems. Its leaves and inflorescences are green to reddish in color.

Rojak or Rujak is a traditional fruit and vegetable salad dish, commonly found in Indonesia, Malaysia and Singapore. Other than referring to this fruit salad dish, the term rojak also means "mixture" or "eclectic mix" in colloquial Malay.