Clupeidae is a family of ray-finned fishes, comprising, for instance, the herrings, shads, sardines, hilsa, and menhadens. The clupeoids include many of the most important food fishes in the world, and are also commonly caught for production of fish oil and fish meal. Many members of the family have a body protected with shiny cycloid (very smooth and uniform) scales, a single dorsal fin, and a fusiform body for quick, evasive swimming and pursuit of prey composed of small planktonic animals. Due to their small size and position in the lower trophic level of many marine food webs, the levels of methylmercury they bioaccumulate are very low, reducing the risk of mercury poisoning when consumed.

Clupeids are mostly marine forage fish, although a few species are found in fresh water. No species has scales on the head, and some are entirely scaleless. The lateral line is short or absent, and the teeth are unusually small where they are present at all. Clupeids typically feed on plankton, and range from 2 to 75 cm (0.8 to 30 in.) in length. [1] The family arguably also contains the "Sundasalangidae", a paedomorphic taxon first thought to be a distinct salmoniform family, but then discovered to be deeply nested in the Clupeidae. [1] In the fossil record, clupeids date back to the early Paleogene.

Clupeids spawn huge numbers of eggs (up to 200,000 in some species) near the surface of the water. After hatching, the larvae live among the plankton until they develop a swim bladder and transform into adults. These eggs and fry are not protected or tended to by parents. The adults typically live in large shoals, seeking protection from piscivorous predators such as birds, sharks and other predatory fish, toothed whales, marine mammals, and jellyfish. They also form bait balls. [2] [1]

Commercially important species of the Clupeidae include the Atlantic menhaden (Brevoortia tyrannus), the Atlantic and Baltic herrings (Clupea harengus), the Pacific herring (C. pallasii), and the European pilchard or sardine (Sardina pilchardus).

The family currently comprises 54 genera and around 200 species. [1]

Menhaden, also known as mossbunker and bunker, are forage fish of the genera Brevoortia and Ethmidium, two genera of marine fish in the family Clupeidae. Menhaden is a blend of poghaden and an Algonquian word akin to Narragansett munnawhatteaûg, derived from munnohquohteau, referring to their use of the fish as fertilizer. It is generally thought that Pilgrims were advised by Tisquantum to plant menhaden with their crops. 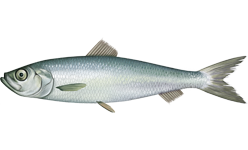 Atlantic herring is a herring in the family Clupeidae. It is one of the most abundant fish species in the world. Atlantic herrings can be found on both sides of the Atlantic Ocean, congregating in large schools. They can grow up to 45 centimetres (18 in) in length and weigh up to 1.1 kilograms (2.4 lb). They feed on copepods, krill and small fish, while their natural predators are seals, whales, cod and other larger fish. 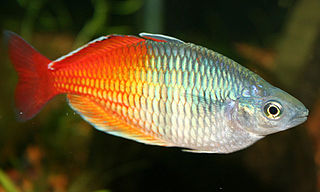 The Atheriniformes, also known as the silversides, are an order of ray-finned fishes that includes the Old World silversides and several less-familiar families, including the unusual Phallostethidae. The order includes at least 354 species. They are found worldwide in tropical and temperate marine and freshwater environments.

Sprat is the common name applied to a group of forage fish belonging to the genus Sprattus in the family Clupeidae. The term also is applied to a number of other small sprat-like forage fish. Like most forage fishes, sprats are highly active, small, oily fish. They travel in large schools with other fish and swim continuously throughout the day. 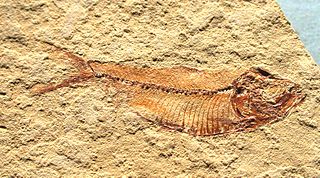 Knightia is an extinct genus of clupeid bony fish that lived in the freshwater lakes and rivers of North America and Asia during the Eocene epoch. The genus was erected by David Starr Jordan in 1907, in honor of the late University of Wyoming professor Wilbur Clinton Knight, "an indefatigable student of the paleontology of the Rocky Mountains." It is the official state fossil of Wyoming, and the most commonly excavated fossil fish in the world.

The Atlantic menhaden is a North American species of fish in the herring family, Clupeidae. 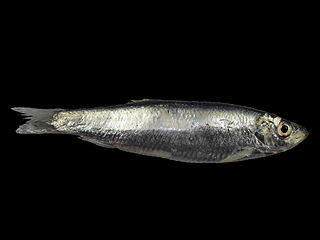 The European sprat, also known as bristling, brisling, garvie, garvock, Russian sardine, russlet, skipper or whitebait, is a species of small marine fish in the herring family Clupeidae. Found in European waters, it has silver grey scales and white-grey flesh. Specific seas in which the species occurs include the Irish Sea, Black Sea, Baltic Sea and Sea of the Hebrides. The fish is the subject of fisheries, particularly in Scandinavia, and is made into fish meal, as well as being used for human consumption. When used for food it can be canned, salted, breaded, fried, boiled, grilled, baked, deep fried, marinated, broiled, and smoked.

The Atlantic thread herring is a herring-like fish in the family Clupeidae.

The little tunny is the most common tuna in the Atlantic Ocean. It is found in warm temperate and tropical waters of the Atlantic and the Mediterranean; in the western Atlantic, it ranges from Brazil to the New England states. It is found regularly in offshore and inshore waters, and is classified as a highly migratory species by UNCLOS. Occurring in large schools and weighing up to 36 lb, it is one of the smaller members of the tuna family (Scombridae).

The Lake Tanganyika sardine is a species of freshwater fish in the family Clupeidae which was endemic to Lake Tanganyika but which has now been introduced to other lakes in Africa as a food source. It is monotypic within the genus Limnothrissa. It and the Lake Tanganyika sprat are known collectively as kapenta. 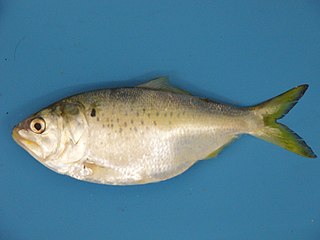 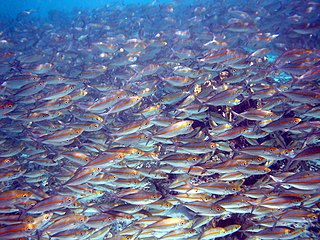 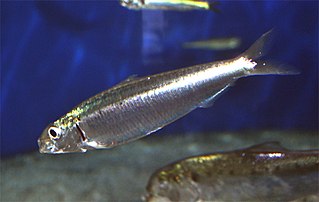 The European pilchard is a species of ray-finned fish in the monotypic genus Sardina. The young of the species are among the many fish that are sometimes called sardines. This common species is found in the northeast Atlantic, the Mediterranean, and the Black Sea at depths of 10–100 m (33–328 ft). It reaches up to 27.5 cm (10.8 in) in length and mostly feeds on planktonic crustaceans. This schooling species is a batch spawner where each female lays 50,000–60,000 eggs.

Herring are forage fish in the wild, mostly belonging to the family Clupeidae, but they are also an important food for humans. Herring often move in large schools around fishing banks and near the coast. The most abundant and commercially important species belong to the genus Clupea, found particularly in shallow, temperate waters of the North Pacific and North Atlantic Oceans, including the Baltic Sea, as well as off the west coast of South America. Three species of Clupea are recognized; the main taxon, the Atlantic herring, accounts for over half the world's commercial capture of herrings.

Clupea is genus of planktivorous bony fish belonging to the family Clupeidae, commonly known as herrings. They are found in the shallow, temperate waters of the North Pacific and the North Atlantic oceans, including the Baltic Sea. Three species of Clupea are recognized. The main taxa, the Atlantic herring and the Pacific herring may each be divided into subspecies. Herrings are forage fish moving in vast schools, coming in spring to the shores of Europe and America, where they form important commercial fisheries.

The Araucanian herring, Clupea bentincki, is a fish species in the family Clupeidae. It is an epipelagic fish, silvery below and dark blue above, which schools in coastal waters off the west coast of South America. There it filter feeds on smaller plankton such as diatoms. It reaches sexual maturity when it is about 10 centimetres long, and is a pelagic spawner, spawning between June and November. 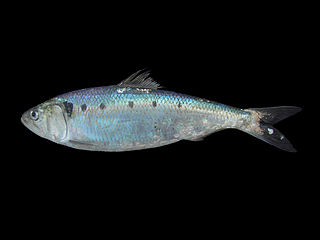 The Alosinae, or the shads, are a subfamily of fishes in the herring family Clupeidae. The subfamily comprises seven genera worldwide, and about 30 species. 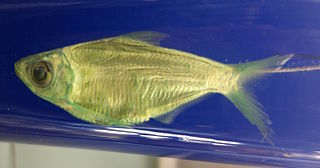 Microthrissa royauxi, the royal sprat, is a species of pelagic, freshwater fish from the herring family Clupeidae which is found in the Congo River basin in west Africa. It was described in 1902 by the Belgian-British zoologist George Albert Boulenger. It is of limited importance as a food fish in subsistence fisheries and its conservation status is Least Concern.