During the late Soviet-era he was a member of the Popular Front of Latvia and contributed to the declaration of renewed Latvian independence in 1990. He was Vice-Prime Minister and Minister for Justice of Latvia from 1993 to 1994 and ambassador to Hungary, Austria and Switzerland from 1994 to 1995. He was then appointed a Judge of the European Court of Human Rights, a position he held until 2004. He finished second in the indirect election for President of Latvia in 2015 behind Raimonds Vējonis. Although an Independent, he was the candidate of the National Alliance. [3] In 2018, Levits was reappointed a Judge of the European Court of Justice, having first been appointed in 2004. [4] He is married and has two children, a son, Linards, and daughter, Indra. [5] He published a book of memoirs in 2019. [6]

Levits was born in Riga, Latvia, during Soviet occupation into the family of Latvian Jewish engineer Jonass Levits and his wife, Latvian-Baltic German poet Ingeborga Levita (née Barga, pen name Aija Zemzare). In 1972, the family was expelled from the USSR for their Soviet dissident activities [7] and settled in West Germany, where Ingeborga's relatives lived. They lived in West Germany until 1990 when Latvia regained its independence.

Levits has stated in interviews that despite his Jewish heritage, he identifies himself foremost as Latvian. [8]

Levits has been involved in Latvian politics since the late 1980s. [9] Levits became a member of the Popular Front of Latvia and a member of the Latvian Citizens' Congress established in 1989. [10] Later, he joined the political club "Klubs 21" and in 1993 was elected a 5th Saeima deputy from the list of the party Latvijas Ceļš. In 2016, he was among the best paid EU officials. In 2018, he was named "European Man of the Year in Latvia" by the European Movement – Latvia. [9]

He has been an Ambassador of Latvia to Austria, Switzerland and Hungary. [10]

He is the co-author of the Preamble to the Constitution of Latvia [11] and has been the head for Commission for Constitutional Law, working under the President together with lawyer Lauris Liepa. [12]

He was named a presidential candidate by the National Alliance party in 2011 and 2015, [13] coming second in votes in the final round to minister of defense Raimonds Vējonis in 2015. [14] Levits was widely discussed as a potential front runner candidate for the presidency in early 2019, [15] and on April 15 the parties of the ruling coalition announced that they would support Levits' candidacy. [16] Latvia's parliament elected him on 29 May 2019. [17]

He was inaugurated in the Saeima on 8 July 2019. [7] During his inaugural speech, he noted that "there is no ideal country, because that implies halted progress." [18] After the ceremony, he visited the Freedom Monument, laid flowers at the grave of Jānis Čakste, and received the keys to Riga Castle from outgoing President Raimonds Vējonis. [19] On July 10, he conducted his first foreign visit to Tallinn, Estonia, meeting with President Kersti Kaljulaid and Prime Minister Jüri Ratas. [20] [21]

Levits has expressed traditionally conservative views on issues in Latvian politics. During his time as a European judge, he has been involved in and commented on current developments in Latvia; for example, he pointed out that neither the reception of refugees nor the Istanbul Convention violate the Constitution of Latvia. [9] Levits has expressed skepticism about enacting major change to the financial system, calling Latvia one of the strongest economies in Europe. [22] On the topic of Russian language, Levits has undertaken many initiatives to purge its use in Latvia, including banning private universities that employ instruction in any language except English and Latvian, and reaffirmed that Russian nationals (even Latvian-born) must first pass a Latvian literacy test to receive citizenship. Levits has said that "Russian language is a shackle from the darkest days in [Latvia's] history," and that "the only way to be freed from it is to use every opportunity to let it rust away." [23] Levits is not a member of any political party, and has expressed a wish to remain independent. [12] [24]

On the 7 December 2019 episode of Saturday Night Live , Levits was portrayed by Alex Moffat, in a sketch that poked fun at Donald Trump's experience at the 2019 NATO summit. [25] [26]

Levits is married to Andra Levite, a gynecologist, and has a son named Linards and a daughter named Indra. [5] In 2019, Levits released his first book Valstsgriba. Idejas un domas Latvijai 1985–2018 (Country's Will: Ideas and thoughts for Latvia 1985–2018) where he mentions articles, interviews and combines them with his personal opinion as a Judge at the Court of Justice of the European Union. [6] Aside from his native Latvian language, he also knows German (from his time in Germany), English, French and Russian. In May 2019, he announced in his first interview as the newly elected President that he wouldn't speak Russian to the Russian media, and so its assumed that Levits speaks it on a personal basis. [27]

The Latvian Green Party is a green political party in Latvia. The party was founded on 13 January 1990, and in 2002 joined with the Latvian Farmers' Union to form the Union of Greens and Farmers (ZZS) alliance. Unusually for a green party in Europe, the LZP is generally considered a centre-right party. In November 2019 the party was expelled from the European Green Party for its diverging ideological stances with European green parties. The party held the world's first prime minister affiliated to a Green Party, Indulis Emsis, and first head of state, Raimonds Vējonis. 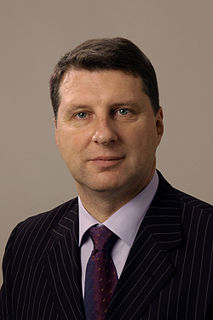 Raimonds Vējonis is a Latvian politician who served as the 9th President of Latvia from 2015 to 2019. He is a member of the Green Party, part of the Union of Greens and Farmers. He served as Minister of Environmental Protection and Regional Development in 2002 and in 2011 and as Minister of the Environment from 2003 to 2011, while the Ministry of Regional Development was a separate department. He became Minister of Defence of Latvia in 2014 and held that office until becoming President in 2015.

The Constitution of Latvia is the fundamental law of the Republic of Latvia. Satversme is the oldest Eastern or Central European constitution still in force and the sixth oldest still-functioning republican basic law in the world. It was adopted, as it states itself in the text, by the people of Latvia, in their freely elected Constitutional Assembly of Latvia on 15 February 1922 and came into force on 7 November 1922. It was heavily influenced by Germany's Weimar Constitution and the Swiss Federal Constitution. The constitution establishes the main bodies of government ; it consists of 115 articles arranged in eight chapters.

Arturs Krišjānis Kariņš is a Latvian–American politician, linguist, and businessperson who has served as Minister of Economics, a Member of the European Parliament, and is currently the Prime Minister of Latvia. Born in Wilmington, Delaware, United States, to parents who had left Latvia during the Soviet occupation, he was active in the American Latvian community throughout his youth. 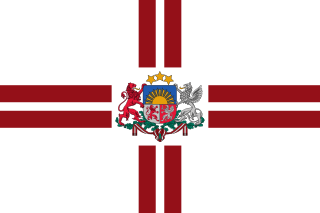 The president of Latvia is head of state and commander-in-chief of the National Armed Forces of the Republic of Latvia.

Parliamentary elections were held in Latvia on 6 October 2018. Following the elections, a coalition government was formed by Who owns the state?, the New Conservative Party, Development/For!, the National Alliance and New Unity. Despite being from the smallest party, Arturs Krišjānis Kariņš of New Unity was chosen as Prime Minister.

Unity is a liberal-conservative political party in Latvia. It is currently the largest party of the centre-right in Latvian politics. It was the leading party in the Dombrovskis and Straujuma cabinets from its inception in 2010 until February 2016; it is a member of the current coalition since January 2019 with its member Krišjānis Kariņš as Prime Minister. Unity is a member of the European People's Party (EPP).

Māris Kučinskis is a Latvian politician and former Prime Minister of Latvia.

Andris Bērziņš is a Latvian businessman and politician who was President of Latvia from 2011 to 2015. Bērziņš was the President of Unibanka from 1993 to 2004. He was elected as President by the Saeima on 2 June 2011. 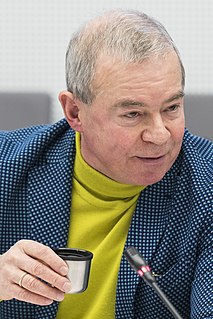 Aivars Lembergs is a Latvian politician and oligarch, who has been the mayor of Ventspils since 1988, a mandate from which he has been suspended since 2008.

Jānis Bordāns is a Latvian politician and lawyer, Minister of Justice of the Republic of Latvia from 2012 to 2014 and since January 2019.

United for Latvia is a populist and economically liberal political party in Latvia. It was founded in 2011 in Rēzekne and in 2013 Ainārs Šlesers became party chairman. Šlesers has been dubbed one of the three "oligarchs" prominent in Latvian politics, and United for Latvia marks his return to electoral politics. He was previously leader of Latvia's First Party/Latvian Way and has served in several governments of Latvia including as Deputy Prime Minister in the government of Aigars Kalvītis and Minister of Transport in the second government of Ivars Godmanis, both of whom are party members. Other formerly prominent Latvian politicians who are now party members include Jānis Jurkāns and Jānis Straume. The party is yet to win seats in the Saeima or the European Parliament. Šlesers and several other party members have been in the past among the Latvian politicians most willing to cooperate with Harmony and other Russian parties in Latvia.

Indirect presidential elections were held in Latvia on 3 June 2015. Raimonds Vējonis of the Green Party was elected President and took office on 8 July. According to the European Green Party, he is the first of their members to become a head of state of a European Union member state.

Who Owns the State? or To Whom Does the Country Belong? is a right-wing populist party in Latvia.

Day of the Restoration of Latvian Independence is a Latvian national holiday and event, being celebrated annually on 4 May. It marks, like the other Baltic republics, the restoration of the Latvian Republic by official declaration by the Supreme Soviet of the Latvian SSR on May 4, 1990. The country would not however, have complete independence, only achieving full independence from the Soviet Union on December 25, 1991.

Aldis Gobzems is a Latvian politician and lawyer. He first rose to prominence as a lawyer who represented victims of the 2013 Zolitūde shopping centre roof collapse, and was the prime ministerial candidate for the Who owns the state? party in the 2018 Latvian parliamentary elections.

Indirect presidential elections were held in Latvia on 29 May 2019.