Last updated October 26, 2020
Kyrgyz politician and the president of Kyrgyzstan

Japarov was born in Keng-Suu, a village in the Tüp District of the Issyk-Kul Region. After finishing his middle school education in 1986, he joined to the Kyrgyz National Academy of Physical Culture and Sport. In 1987, Japarov was drafted into the Soviet Army, where he served for two years in Novosibirsk as a commander in a telecommunications division. From 1989 to 1991, Japarov continued his education in the academy. In 2006, Japarov graduated from the Kyrgyz-Russian Slavic University with a degree in law.[ citation needed ]

Japarov began his political career after the 2005 Tulip Revolution. In March 2005, he was elected as member of the Supreme Council from the Tyup electoral district where he headed the Kelechek parliamentary faction. He was a supporter of President Kurmanbek Bakiyev. In 2006, Japarov was a member of the State Awards Commission. In 2007, he was Deputy Chairman of the Amnesty Commission. [3]

In the 2007 parliamentary elections, he participated in the lists of the pro-presidential party Ak Jol, which won the majority of seats in parliament, but went on to work as an adviser to the president. From 2008 to 2010, Japarov worked as an authorized representative of the National Agency for the Prevention of Corruption. [3]

In 2010, President Bakiyev was overthrown in the Kyrgyz Revolution of 2010. As a result of interethnic clashes that took place soon in Osh and Jalal-Abad, Japarov and his associates took an active part, which according to their own statements, they tried to prevent clashes. However they were accused by opponents in supporting the Kyrgyz nationalists. [3]

In the October 2010 elections, he was reelected as a member of Supreme Council on the party list of Ata-Zhurt which led by Kamchybek Tashiev, which won the majority of seats. From there, he became the chairman of the Committee on Judicial and Legal issues. [3]

Since 2012, Japarov has advocated the nationalization of the Kumtor gold mine located in his native Issyk-Kul Region, and accused the management company, Centerra Gold, of environmental violations and corruption. In this regard, he gained popularity among his fellow countrymen. [3]

During one of the rallies for the nationalization of Kumtor in the fall of 2012, the protesters attempted to take over the White House in Bishkek. Tashiev and Japarov were both charged under Article 295 of the Criminal Code of the Kyrgyz Republic "Forcible seizure of power or forcible retention of power." In March 2013, the Pervomaisky District Court of Bishkek found them guilty and sentenced them to one year and six months in prison. But in June 2013, the Bishkek City Court acquitted the politicians and released them in the courtroom. [4]

On 27 June 2013, during the protests against Kumtor in Karakol, the protesters tried to kidnap the akim of the region Emilbek Kaptagaev and take him hostage. The Kyrgyz authorities accused Japarov and Kubanychbek Kadyrov of organizing the plan. The protest leaders were detained, but Japarov, who denied his involvement, fled Kyrgyzstan where he lived for some time in Cyprus. [5] [3]

In 2017, Japarov attempted to return to Kyrgyzstan. On 25 March 2017, he was detained at the Kyrgyz-Kazakh border. In the case of allegedly attempting to kidnap Emilbek Kaptagaev hostage, he was sentenced to 11 years and 6 months in prison. [3]

On 5 October 2020, protests and demonstrations against the results of the parliamentary elections began throughout Kyrgyzstan. [6]

After the release of Japarov from a seized government building on 6 October, he was taken to Ala-Too Square in Bishkek where he sought appointment to become prime minister. [7] Members of parliament staying at the Dostuk Hotel approved his appointment that night, however with the opposition's nomination, Tilek Toktogaziev, declaring himself to instead be the legitimate head of government. [8] Toktogaziev asserted the election to be illegal, claiming that members were pressured by Japarov's supporters who had gathered near the hotel. [9] Opponents of Japarov also highlighted the absence of a quorum (minimum attendance threshold) and a violation of parliamentary procedure. [5]

On 13 October, then-President Sooronbay Jeenbekov rejected Japarov's appointment as prime minister due to proxy voting occurring. [10] [11] [12] Jeenbekov requested for the parliament to reconvene and vote again for the nomination; this happened the following day, with Japarov again winning parliamentary nomination. [13] Japarov successfully was approved as prime minister by Jeenbekov, however was initially unsuccessful in persuading the president to step down until a new general election could be held. [14] [15] [12]

The following day, on 15 October, Jeenbekov resigned from the presidency, leading Japarov to declare himself as acting president. [16] [17] Despite the Kyrgyzstan Constitution stating that the speaker of the Supreme Council should succeed the role, Kanatbek Isaev refused to assume office, resulting in Japarov becoming the acting president. [18] [19] He was confirmed as president of Kyrgyzstan by parliament on 16 October 2020. [20] Under the Kyrgyzstan constitution, presidential elections are to be held within three months of the termination of the preceding president; the electoral commission has not set the date as of 18 October 2020. [21] 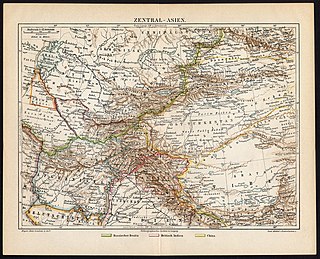 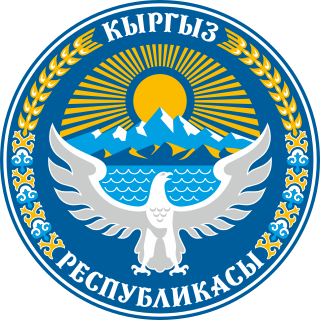 The President of Kyrgyzstan is the head of state and the highest official of the Kyrgyz Republic. The president, according to the constitution, "is the symbol of the unity of people and state power, and is the guarantor of the Constitution of the Kyrgyz Republic, and of an individual and citizen." The president is directly elected for no more than one six-year term by the Kyrgyz electorate. The office of president was established in 1990 replacing the Chairman of the Supreme Soviet that existed, in different forms, from 1927 whilst the country was known as the Kirghiz Soviet Socialist Republic.

The Social Democratic Party of Kyrgyzstan is a political party in Kyrgyzstan. Members formed the party on 1 October 1993, but did not register with the Justice Ministry until 16 December 1994. Abdygany Erkebaev served as the party's first chairman. Almazbek Atambayev replaced him on 30 July 1999. The majority of the party's membership is drawn from the country's entrepreneurs.

Edil Baisalov is a Kyrgyz politician, civil society activist who currently serves as the Kyrgyz Republic's Ambassador to the Court of St James's. He played prominent role in the Tulip Revolution of 2005 and following the 2010 Kyrgyzstani uprising on April 7, 2010 briefly served as Chief of Staff of the interim government led by Roza Otunbayeva. In 1999-2007 Baisalov led the 'Coalition for Civil Society and Democracy', the largest Kyrgyz advocacy and election monitoring network.

Almazbek Sharshenovich Atambayev is a Kyrgyz politician who served as the President of Kyrgyzstan from 1 December 2011 to 24 November 2017. He was Prime Minister of Kyrgyzstan from 17 December 2010 to 1 December 2011, and from 29 March 2007 to 28 November 2007. He served as Chairman of the Social Democratic Party of Kyrgyzstan (SDPK) from 30 July 1999 to 23 September 2011. Recently he was imprisoned, facing charges of corruption and manslaughter. On 5 October 2020, election protestors freed Atambayev from prison. After a failed assassination attempt, however, he was imprisoned again on 10 October.

Kyrgyzstan is ranked as the 135th least corrupt country in the 2017 Corruption Perceptions Index, and despite having a strong legal framework, there still exists a huge gulf in implementation of the law. Kyrgyzstan’s rampant corruption which penetrates all levels of society, including the presidency, eventually caused the Tulip Revolution in 2005, overthrowing Askar Akayev, and the 2010 Kyrgyzstani revolution, ousting Kurmanbek Bakiyev from office. 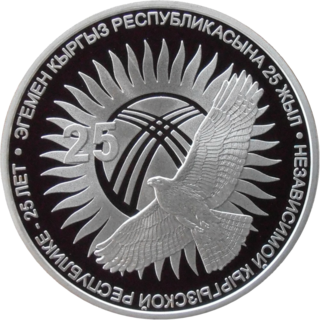 Sooronbay Sharipovich Jeenbekov is a Kyrgyz politician who served as President of Kyrgyzstan from 2017 to 2020, until his resignation following a week of protests. He was also the Prime Minister of Kyrgyzstan from April 2016 to August 2017.

Events from the year 2017 in Kyrgyzstan

The Inauguration of Sooronbay Jeenbekov as the President of Kyrgyzstan took place on November 24, 2017, in the Enesay reception house of the Ala Archa State Residence in Bishkek. The inauguration was declared the first peaceful transition of power in Kyrgyzstan in its 26-year history by foreign analyst. 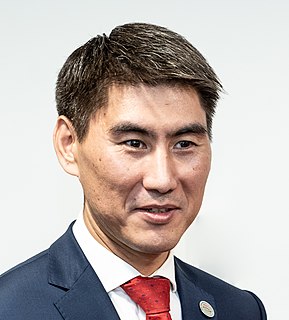 Chingiz Azamatovich Aidarbekov is a Kyrgyz diplomat who is a former Minister of Foreign Affairs of Kyrgyzstan serving in the position from October 2018 to October 2020.

Kyrgyz-Russian Slavic University named after Boris Yeltsin is a university which is jointly operated by the Kyrgyz government and the Government of Russia, located in city of Bishkek, the capital of the Kyrgyzstan.

Parliamentary elections were held in Kyrgyzstan on 4 October 2020. The results showed that pro-government parties had won a supermajority of seats. The election was subsequently annulled by the Central Election Commission during the 2020 Kyrgyzstan protests.

Events from the year 2020 in Kyrgyzstan.

Raimbek Matraimov is a Kyrgyz politician. He was the deputy chair of the State Customs Service of Kyrgyzstan. After being fired in late 2017, Matraimov became a central figure in an ongoing large scale money-laundering case, one of the biggest scandals in the history of Kyrgyz politics.

My Homeland Kyrgyzstan is a centre-right political party in Kyrgyzstan which was founded in 2015. In August 2020, Ata-Zhurt announced it would be running on a joint list with the party for the upcoming elections. The party is viewed as supportive of Kyrgyz President Sooronbay Jeenbekov. 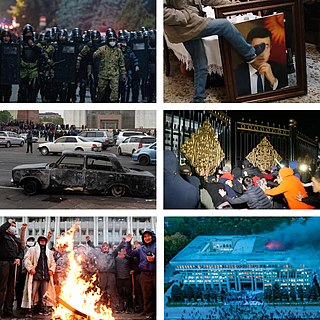 The 2020 Kyrgyzstani protests began on 5 October 2020 in response to the recent parliamentary election that was perceived by protestors as unfair, with allegations of vote rigging. The results of the election were annulled on 6 October 2020. On 12 October 2020, President Jeenbekov announced a state of emergency in the capital city of Bishkek, which was approved by Parliament the following day. Jeenbekov resigned on 15 October 2020.