Last updated January 04, 2022
Asian political and economic intergovernmental organization
Not to be confused with OECD.

The Economic Cooperation Organization or ECO is an Asian political and economic intergovernmental organization which was founded in 1985 in Tehran by the leaders of Iran, Pakistan, and Turkey. It provides a platform to discuss ways to improve development and promote trade and investment opportunities. The ECO is an ad hoc organisation under the United Nations Charter. [4] The objective is to establish a single market for goods and services, much like the European Union. [5] Following the dissolution of the Soviet Union, the ECO expanded to include Afghanistan, Azerbaijan, Kazakhstan, Kyrgyzstan, Tajikistan, Turkmenistan and Uzbekistan in 1992.

The current framework of the ECO expresses itself mostly in the form of bilateral agreements and arbitration mechanisms between individual and fully sovereign member states. This makes the ECO similar to ASEAN in that it is an organisation that has its own offices and bureaucracy for implementation of trade amongst sovereign member states. This consists of the historically integrated agricultural region of the Ferghana Valley which allows for trade and common agricultural production in the border region between Kyrgyzstan, Tajikistan and Uzbekistan. Pakistan has free trade agreements with both Afghanistan and Iran which are in the process of implementation.

In 2017, a free trade agreement between Turkey and Iran was proposed to be signed in the future, [6] in addition to a proposed Pakistan-Turkey Free Trade Agreement. [7] The Afghanistan-Pakistan Transit Trade Agreement is designed to facilitate trade for goods and services for Central Asia via both Afghanistan and Pakistan. [8] This is in addition to the Ashgabat agreement which is a multi-modal transport agreement between the Central Asian states. [9] Further cooperation amongst members is planned in the form of the Iran–Pakistan gas pipeline, as well as a Turkmenistan–Afghanistan–Pakistan pipeline. Current pipelines include the Tabriz–Ankara pipeline in addition to the planned Persian Pipeline. This is in addition to the transportation of oil and gas from Central Asian states such as Kazakhstan and Turkmenistan to supply the industrialisation underway in Iran, Pakistan, Turkey and beyond. Pakistan plans to diversify its source of oil and gas supplies towards the Central Asian states including petroleum import contracts with Azerbaijan. [10]

The ECO's secretariat and its cultural department are located in Iran, its economic bureau is in Turkey, and its scientific bureau is situated in Pakistan.

The Economic Cooperation Organization was the successor organisation of what was the Regional Cooperation for Development (RCD), founded in 1964, which ended activities in 1979. In 1985 Iran, Pakistan and Turkey joined to form the ECO. By the fall of 1992, the ECO expanded to include seven new members; Afghanistan, Azerbaijan, Kazakhstan, Kyrgyzstan, Tajikistan, Turkmenistan and Uzbekistan. The date of the expansion to its present strength, 28 November, is referred to as "ECO Day". The status and power of the ECO is growing. However, the organisation faces many challenges. Most importantly, the member states are lacking appropriate infrastructure and institutions which the Organization is primarily seeking to develop, to make full use of the available resources in the region and provide sustainable development for the member nations. The Economic Cooperation Organisation Trade Agreement (ECOTA) was signed on 17 July 2003 in Islamabad. [11] ECO Trade Promotion Organization (TPO) is a new organization for trade promotion among member states located in Iran (2009). [12] Under the agreement reached between ECO members, the common trade market should be established by 2015. [5]

The Council of Ministers (COM) is the highest policy and decision-making body and is composed of the various Ministers of Foreign Affairs or such other representatives of the ministerial rank as may be designated by the respective governments. The COM meets at least once a year by rotation among the member states.

The Regional Planning Council (RPC) is composed of the Head of the Planning Organization of member states or such other representatives of corresponding authorities.

Activities of ECO are conducted through directorates under the supervision of Secretary-General and his Deputies which considered and evolve projects and programs of mutual benefit in the fields of:

A Transport Council to develop clearer transport and transit policies is proposed. [17]

ECO Chamber of Commerce and Industry

ECO-CCI was established on 10 June 1993. Its objectives are to contribute to enhancing economic cooperation and relations in trade, industry, agriculture, tourism, contracting, engineering and banking sectors as well as to realize joint investments among the Member States. National Chambers of Afghanistan, Azerbaijan, Iran, Kazakhstan, Kyrgyzstan, Pakistan, Tajikistan, and Turkey are members of ECO-CCI. The 7th General Assembly Meeting of ECO Chamber of Commerce and Industry (ECO-CCI), held on 20 April 2004 in Kabul, Afghanistan. The participating member states offered some proposals for developing new mechanism and modalities for better interaction between member chambers and to re-activate ECO-CCI.

In March 1995, Iran, Pakistan, and Turkey agreed to establish ECO Reinsurance Company. The purpose is to supplement the existing reinsurance services in the region, promote the growth of the national underwriting and retention capacities, minimize the outflow of foreign exchange from the region and to support economic development in the region. The three-member countries decided to form a Trilateral Interim Committee to pave the way for the establishment of this important institution. The Trilateral Interim Committee in its various meetings reviewed the relevant issues such as the development of the business plan and signing of the Articles of Agreement already finalized by a group of Experts from the three founding member countries. [21]

Governments of all the ECO Member States has established a central resource pool in the shape of ECO Consultancy and Engineering Company (Pvt.) Ltd., or ECO-CEC, to assist in the development projects sponsored by the ECO Member States or by its Trade and Development Bank. The founder States are the Islamic Republic of Iran, Islamic Republic of Pakistan, and Republic of Turkey which holds an equal share in ECO-CEC, Turkey being represented by two companies and Iran and Pakistan, by one each. The Iranian and Turkish Companies specialize mainly in oil and gas pipelines, refineries, petrochemical and industrial engineering, while the Pakistani partner in all other fields of development engineering, including communications, power, urban development public health, telecommunications, water resources development and agriculture. ECO-CEC provides its expertise in the entire range of consultancy operations, starting from conception, project planning and appraisal, through pre-feasibility, feasibility and financial studies, investigation and exploration, site selection to engineering design, material and equipment specifications, construction supervision, contract management, quality control and preparation of technical manuals for the operation and maintenance of the projects.

As of 31 December 2015, paid in the share capital of the ETDB was SDR 310,870 thousand since Azerbaijan, Afghanistan, and Kyrgyzstan are in process of payment of their paid-in capital contributions.

The Bank has successfully started its operations in 2008. Its headquarters is in Istanbul (Turkey) and representative offices are in Karachi (Pakistan) and Tehran (Iran). The primary objective of the Bank is to provide financial resources for projects and programmes in member countries. The Bank offers a range of medium-to-long term products i.e. project finance, corporate finance, trade finance and loans to support small and medium-sized enterprises directly or through financial intermediaries to private and state-owned entities. 11

ECO Cultural Institute (ECI) is affiliated with ECO and aims at fostering understanding and the preservation of the rich cultural heritage of its members through common projects in the field of the media, literature, art, philosophy, sport and education. [22]

Relationship with other organizations

All the ECO states are also member-states of the Organisation of the Islamic Cooperation (OIC), while ECO itself has observer status in the OIC since 1995.

Leaders of ECO member states, as of 2022

Central Asia is a region in Asia which stretches from the Caspian Sea in the west to China and Mongolia in the east, and from Afghanistan and Iran in the south to Russia in the north, including the former Soviet republics of Kazakhstan, Kyrgyzstan, Tajikistan, Turkmenistan, and Uzbekistan. It is also colloquially referred to as "the stans" as the countries all have names ending with the Persian suffix "-stan", meaning "land of".

Uzbekistan joined the Commonwealth of Independent States in December 1991. However, it is opposed to reintegration and withdrew from the CIS collective security arrangement in 1999. Since that time, Uzbekistan has participated in the CIS peacekeeping force in Tajikistan and in United Nations-organized groups to help resolve the Tajik and Afghan conflicts, both of which it sees as posing threats to its own stability. Uzbekistan is an active supporter of U.S. efforts against worldwide terrorism and joined the coalitions which have dealt with both Afghanistan and Iraq. It is a member of the United Nations, the Euro-Atlantic Partnership Council, Partnership for Peace, and the Organization for Security and Cooperation in Europe (OSCE). It belongs to the Organisation of Islamic Cooperation (OIC) and the Economic Cooperation Organization, which comprises 7 Central Asian countries: Pakistan, Uzbekistan, Kazakhstan, Turkmenistan, Afghanistan, Kyrgyzstan and Tajikistan. It is a founding member of and remains involved in the Central Asian Union, formed with Kazakhstan and Kyrgyzstan, joined in March 1998 by Tajikistan.

The Shanghai Cooperation Organization (SCO), also known as the Shanghai Pact, is an Eurasian political, economic, and security alliance. It is the world's largest regional organisation in geographic scope and population, covering three-fifths of the Eurasian continent, 40% of the world population, and more than 20% of global GDP.

Central Asia has long been a geostrategic location because of its proximity to the interests of several great powers and regional powers. 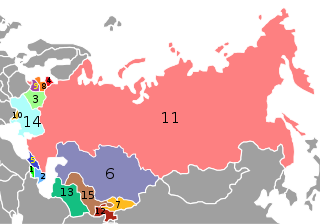 The ECO Cup was a football competition for members of Economic Cooperation Organization. Previously it was known as RCD Cup, RCD abbreviates Regional Corporation for Development and was an economic cooperation between Iran, Pakistan and Turkey from 1964 to 1979. A new organisation, ECO, was set up in 1985. In 1992, Afghanistan, Uzbekistan, Tajikistan, Turkmenistan, Kazakhstan, Kyrgyzstan and Azerbaijan joined ECO. 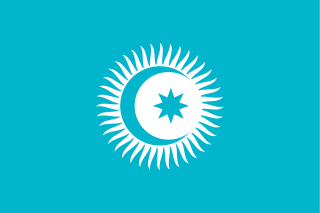 The Organization of Turkic States, formerly called the Turkic Council or the Cooperation Council of Turkic Speaking States, is an international organization comprising prominent independent Turkic countries consisting of Azerbaijan, Kazakhstan, Kyrgyzstan, Turkey and Uzbekistan. It is an intergovernmental organization whose overarching aim is promoting comprehensive cooperation among Turkic-speaking states. First proposed by Kazakh President Nursultan Nazarbayev in 2006, it was founded on October 3, 2009, in Nakhchivan.

The Economic Cooperation Organization Trade Agreement or ECOTA is a preferential trade agreement reached on 17 July 2003 at the ECO summit in Islamabad whereby a preferential trade region was formed between the countries of Afghanistan, Azerbaijan, Iran, Kazakhstan, Kyrgyzstan, Pakistan, Tajikistan, Turkey, Turkmenistan and Uzbekistan. As of 2008, the ECOTA is in effect. As part of ECO Vision 2025, Afghanistan, Iran, Pakistan, Tajikistan and Turkey agreed to implement free trade area by 2025.

The 1993 ECO summit was the second Economic Cooperation Organization summit, held between 6–7 May in Istanbul, Turkey. Afghanistan was welcomed as the 10th member state of the ECO during the summit.

The 1995 ECO summit was the third Economic Cooperation Organization summit, held 14–15 May 1995 in Islamabad, Pakistan.

The 1996 ECO summit was the fourth Economic Cooperation Organization summit, held between 14 and 15 May 1996 in Ashgabat, Turkmenistan.

The 2012 ECO summit was the twelfth Economic Cooperation Organization summit, held on 16 October 2012 in Baku, Azerbaijan.

ECO Science Foundation (ECOSF) is an intergovernmental organization and a specialized agency of the Economic Cooperation Organization (ECO). It was established in Islamabad, Pakistan in December 2011, with holding of the first meeting of Board of Trustees (BoT), the highest decision making body. ECOSF aims to promote scientific and technology research with an end goal to raise socio-economic standing of ten member states.

The Organization for Economic Co-operation is an intergovernmental organization established in 1985 with cooperation of Turkey, Iran and Pakistan. The crucial goal of this organization is to achieve sustainable economic development, promote trade, integrate to the world economy and develop efficient transport system. Azerbaijan joined the organization in 1992. From August 2012 till 2016, the Secretary General of ECO is a representative from Azerbaijan.