The London Borough of Redbridge is a London borough in East London, England. [2] It is home to Redbridge Institute of Adult Education [3] and Redbridge Football Club. It borders four other London boroughs: Waltham Forest to the west, Newham to the south-west, Barking and Dagenham to the south-east and Havering to the east, as well as the shire county of Essex to the north.

Its administrative headquarters is at Redbridge Town Hall in Ilford. Wanstead and Woodford are the other principal settlements. The local authority is Redbridge London Borough Council.

The name comes from a bridge over the River Roding which was demolished in 1921. The bridge was made of red brick, unlike other bridges in the area made of white stone. The name had first been applied to the Redbridge area and Redbridge tube station was opened in 1947. It was earlier known as Hocklee's Bridge. [4]

See also: Parks and open spaces in the London Borough of Redbridge

Redbridge has more than 35 parks, playgrounds and open spaces. These include Hainault Forest Country Park, with 300 acres of countryside including adventure play areas, cafe and petting zoo; Roding Valley Park, a wildlife sanctuary with a range of flora and fauna and woodland areas; Valentines Park, including Valentines Mansion, ornamental gardens, bowling green and outdoor gym; and Claybury Woods and Park, a conservation area that features an ancient area of oak and hornbeam woodland, meadows and wildlife ponds. [5]

Valentines Mansion is a Georgian country house and gardens in the grounds of Valentines Park, Ilford. [6]

Redbridge Museum, which opened in 2000, is situated on the second floor of Redbridge Central Library, Clements Road, Ilford, along with the Redbridge Heritage Centre. [8] [9]

The Embassy Cinema is an Art Deco former cinema in Chadwell Heath. It opened in 1934 and closed in 1966, but is currently the focus of a major restoration project. [10]

Redbridge has 13 libraries across the borough. This includes the Redbridge Central Library, in Clements Road, Ilford, which had a major refurbishment in 2012. The libraries offer a number of services including reading clubs, story time sessions, study areas and learning resources. The libraries in Redbridge are: [11]

Redbridge has a number of sports and leisure facilities including the road and off-road cycling tracks at Redbridge Cycling Centre. [12]

There are two local football teams both playing in the Isthmian League Division One: Redbridge F.C. (not to be confused with Dagenham & Redbridge) and Ilford FC. In addition there is fellow Non-League football club Barkingside F.C. who play at The Oakside stadium. [13]

Valentines Park in Ilford acted as one of Essex County Cricket Club's home grounds in 1923-4 and from 1935 until 2002, when the club stopped playing there due to financial constraints. [14]

Main article: List of districts in the London Borough of Redbridge

In 2011 the population of Redbridge was recorded at 278,970. [15] In common with the other London boroughs this continues a period of growth; between the 1991 and 2001 censuses the increase was 7.5% [16] with a further rise of 15.3% by 2011. [15] Redbridge has the third highest proportion of children and a higher-than-average proportion of older adults while the proportion of working age adults is slightly lower than average. [17] The population density was last recorded at 4,945 residents per km2 (the London regional density is 5,199, far higher than the England and Wales figure of 371). [15]

Redbridge is one of the most ethnically diverse local authorities in the UK. 34% of respondents to the 2011 census stated that they were born outside the UK and 65.5% identified as belonging to an ethnic group other than white British. [19] Redbridge's largest ethnic group is White British (34.5%), followed by Indian (16.4%), [19] and Pakistani (Redbridge has the highest proportion of Pakistani residents of any London borough). [19]

The number of Christians residing in Redbridge ranked fourth lowest in England and Wales, and 12 percent below the London average of 48.4%. The number of Muslims in Redbridge has more than doubled since 2001. [24]

The Roding Valley Way is a designated walking and cycling route between Woodford and Ilford. [25]

These services serving these stations will be rebranded from TfL Rail to Elizabeth Line in late 2020.

Central line: Hainault Loop (follows the route of the A12 from Wanstead to Newbury Park)

Numerous London buses run through and within the borough.

The borough was formed in 1965 by the London Government Act 1963 as a merger of the former area of:

All of which had been transferred from Essex to Greater London by the Act. The former town hall in Ilford is now known as Redbridge Town Hall. [29]

In November 2018, Redbridge Council was reported as the sixth-most productive council in England overall and the most productive in provision of adult social care in a report published by the public service consultancy iMPOWER. [30] [31]

Redbridge Council is the Local Education Authority. The Borough has the accolade of sending more young people to university than any other borough in the country in both 2011 and 2012. GCSE and A Level results are consistently higher than the Country's average. A 2017 report by Trust for London and the New Policy Institute found that Redbridge has the highest proportion of 19 year olds with Level 3 qualifications (equivalent to an A Level) of any London borough. [36]

All schools in the borough take part in the Redbridge Schools Choral Festival, a bi-annual music festival held in the Royal Albert Hall in Knightsbridge. [37] 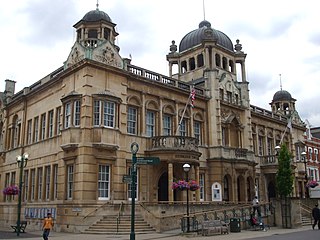 Ilford is a large town in East London, situated in the London Borough of Redbridge. Identified as a metropolitan centre in the London Plan, Ilford is classed as a significant commercial and retail centre for the wider south east of England. It had a population of 168,168 in 2011, compared to 303,858 for the entire borough. 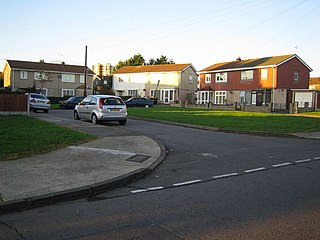 Hainault is a large suburban housing estate in north-eastern Greater London in the London Borough of Redbridge. It is located 12.5 miles (20.1 km) northeast of Charing Cross. Most of the housing in Hainault was built by the London County Council between 1947 and 1953. Originally spanning the parishes of Chigwell, Dagenham and Ilford, in 1965 the area was combined in a single London borough and became part of Greater London. It is adjacent to the Metropolitan Green Belt, bordered on the east by Hainault Forest Country Park and to the north by open land and the boundary with the Epping Forest District of Essex. For postal addresses, it is split between the Chigwell and Ilford post towns and it is within the London 020 telephone area code. The area is served by London Underground's Central Line.

Gants Hill is an area of Ilford in East London, England, within the borough of Redbridge. It is a suburb 9.5 miles (15.3 km) east northeast of Charing Cross. It lends its name to a central roundabout where five roads meet.

Ilford North is a constituency created in 1945 and represented in the House of Commons of the UK Parliament since 2015 by Wes Streeting of the Labour Party.

Wanstead is a London Underground station in Wanstead in the London Borough of Redbridge, east London. on the Hainault loop of the Central line. Towards Central London the next station is Leytonstone. Towards Woodford it is Redbridge. It is in Travelcard Zone 4. 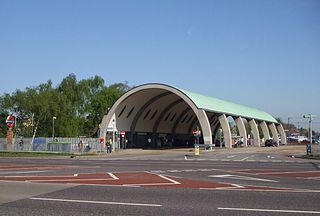 Newbury Park is a London Underground station in Newbury Park, Ilford, East London. It is between Barkingside and Gants Hill stations on the Hainault loop of the Central line, in Travelcard Zone 4. The station was initially opened by the Great Eastern Railway on 1 May 1903 and subsequently transferred its services to the London & North Eastern Railway due to the amalgamation. Underground trains only started serving the station on 14 December 1947, operating via the Gants Hill tunnel. The line was extended to Hainault on 31 May 1948. The Grade II listed bus shelter designed by Oliver Hill opened on 6 July 1949. Lifts were fully installed at Newbury Park in November 2018 to provide step-free access to the station, approximately 10 years after TfL abandoned the project.

Barkingside is a London Underground station on the Central line. It is on the eastern edge of Barkingside in east London at the end of a cul-de-sac off Station Road. The station is next door to the home of Redbridge F.C.. It is between Newbury Park and Fairlop stations and has been in Travelcard Zone 4 since 2 January 2007.

Leyton and Wanstead is a constituency created in 1997 and represented in the House of Commons of the UK Parliament since 2010 by John Cryer of the Labour Party.

Ilford was a civil parish and local government district in south west Essex, England from 1888 to 1965, covering the town Ilford. The district saw a considerable rise in population throughout its life, caused by the expansion of the built-up area of London, and became one of the most populous districts of its type in England. The district now corresponds to the greater part of the London Borough of Redbridge in Greater London.

The London Borough of Redbridge, one of the northern peripheral London boroughs, has within its boundaries parts of two large open spaces: Epping Forest and Wanstead Flats. Apart from many smaller parks, gardens and sports grounds, the following are the main open spaces in Redbridge:

Barkingside is a district and suburban town in north Ilford, in the London Borough of Redbridge, England. It is situated approximately three miles north of Ilford Town Centre.

Clayhall is a district of Ilford in the London Borough of Redbridge in northeast London, England. It is a suburban development. The name is derived from an old manor house that stood within the current area. It is first mentioned in a document of 1203 as being an area of land granted to Adam and Matilda de la Claie by Richard de la Claie. The estate probably remained in the hands of this family for about one hundred years, after which it passed through several hands, without ever being positively identified by name, until in a conveyance of 1410 it is described as the manor of Clayhall.

Wanstead and Woodford was a constituency in north-east London, represented in the House of Commons of the Parliament of the United Kingdom. It elected one Member of Parliament (MP) by the first past the post system of election. It existed between 1964 and 1997.

Redbridge London Borough Council is the local authority for Redbridge in Greater London, England, and one of the capital's 32 borough councils. Redbridge is divided into 21 wards and elects 63 councillors. As of 4 May 2018, Redbridge Council comprises 51 Labour Party members, and 12 Conservative Party members. There were three Liberal Democrats elected in 2014, but they won no seats in 2018. Alternating between Conservative administration and no overall control from 1965 to 2014, the council is now run by the Labour Party.

The Hainault Loop was originally opened as the Fairlop Loop, a 6.5-mile (10 km) branch line of the Great Eastern Railway (GER). It once connected Woodford on the Ongar branch to Ilford on the Main Line, with an eastward connection for goods, excursions and stock transfers to Seven Kings. The loop opened to freight on 20 April 1903 and to passengers on 1 May 1903. In 1923, the GER was "grouped" into the London & North Eastern Railway (LNER), who provided passenger services until December 1947. After this date, the route was electrified for London Underground services from both the Woodford and Leytonstone directions, the link to Ilford closed, and today it forms the greater part of the Hainault Loop on the Central line, having been served by Tube trains since 1948. 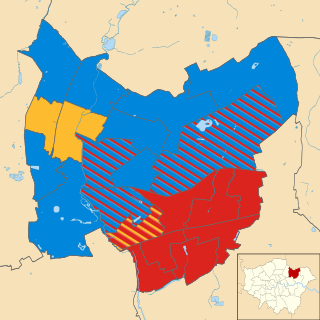 Elections for Redbridge London Borough Council were held on 6 May 2010. The 2010 General Election and other local elections took place on the same day.

The 1964 Redbridge Council election took place on 7 May 1964 to elect members of Redbridge London Borough Council in London, England. The whole council was up for election and the Conservative party gained control of the council.

Jas Athwal is a British Labour Party politician who currently serves as the Leader of Redbridge London Borough Council.