Manchester City Council is the local government authority for Manchester, a city and metropolitan borough in Greater Manchester, England. It is composed of 96 councillors, three for each of the 32 electoral wards of Manchester. The council is controlled by the Labour Party and led by Sir Richard Leese. There are two Lib Dem Councillors, and one currently non-aligned Independent member. Joanne Roney is the chief executive. Many of the council's staff are based at Manchester Town Hall.

Manchester was incorporated in 1838 under the Municipal Corporations Act 1835 as the Corporation of Manchester or Manchester Corporation. It achieved city status in 1853, only the second such grant since the Reformation. The area included in the city has been increased many times, in 1885 (Bradford, Harpurhey and Rusholme), 1890 (Blackley, Crumpsall, part of Droylsden, Kirkmanshulme, Moston, Newton Heath, Openshaw, and West Gorton), 1903 (Heaton), 1904 (Burnage, Chorlton cum Hardy, Didsbury, and Moss Side), 1909 (Gorton, and Levenshulme), 1931 (Wythenshawe: Baguley, Northenden, and Northen Etchells), and Ringway in 1974. A new Town Hall was opened in 1877 (by Alderman Abel Heywood) and the Mayor of Manchester was granted the title of Lord Mayor in 1893. [2]

Under the Local Government Act 1972 the council was reconstituted as a metropolitan borough council in 1974, and since then it has been controlled by the Labour Party. In 1980, Manchester was the first council to declare itself a nuclear-free zone. In 1984 it formed an equal opportunities unit as part of its opposition to Section 28. [3]

Elections are usually by thirds (a third of the seats elected, three years in every four), although the 2018 and 2004 elections saw all seats contested due to substantial boundary changes. Labour has controlled a majority of seats in every election since the council was reconstituted. Between 2014 and 2016 Labour occupied every seat with no opposition. [4] In the local elections held on 5 May 2016, former Manchester Withington MP, John Leech, was elected with 53% of the vote signifying the first gain for any party other than Labour for the first time in six years in Manchester and providing an opposition for the first time in two years. [5] On 7 March 2017, it was reported that City Centre Councillor Kevin Peel had been suspended from the Manchester Labour group after reports of bullying. He sat as an independent, still taking the Labour Group whip until he rejoined Labour. [6] On 24 July 2019 it was reported that Majid Dar (Ancoats and Beswick) had been suspended by the Labour party. [7]

In April 2013, Manchester City Council threatened to take legal action against The Manchester Gazette, for its use of the City's coat of arms on their website. The News Outlet claimed it already gained permission and continued to use it for a further 8 months in spite of the warnings. Withington MP John Leech said the town hall's latest move a ‘massive over-reaction and waste of money’, adding: "Have the council’s legal department got nothing better to do?" [11] [12]

On 14 April 2010 the BBC reported that council leader Richard Leese had stood down temporarily from his post as leader of Manchester City Council after having been arrested on suspicion of the common assault of his 16-year-old stepdaughter. He was released after accepting a police caution and admitting striking his stepdaughter across the face. [13] [14]

On 7 March 2017, it was reported that City Centre Councillor Kevin Peel had been suspended from the Manchester Labour group after reports of bullying. He sat as an independent, still taking the Labour Group whip until he rejoined Labour. [15] He did not stand in the following election. [16]

On 12 February 2019, an 'enormous political row' [17] erupted after Manchester Council announced it was consulting the public on a new Public Spare Protection Order which, among other things, targeted ‘aggressive’ begging and rough sleepers who pitch tents or sleep in doorways. [18] The council's opposition leader, and former Lib Dem MP, John Leech, sparked further controversy when he tweeted that the potential council policy which was still out for public consultation was "absolute crap". [19]

On 8 March 2019, at a routine council budget meeting, a row erupted before proceedings began. [20] The argument was prompted by a sign put up by Labour above the Lord Mayor's chair at the front of the council chamber, reading ‘10 Years of Tory And Lib Dem Cuts’. When the Lib Dem leader John Leech entered the chamber, he took down the message – prompting senior Labour Councillor Pat Karney to ‘thunder’ across the chamber. [21] He began ‘screaming’ and ‘shouting’ and Leech and told him to hand over the laminated A4 pieces of paper at least 11 times. [22]

On 15 April 2019, The Times uncovered a number of offensive tweets from Fallowfield Labour councillor Jade Doswell. [23] Doswell had tweeted that she was a "little bit sick in my mouth" at the sight of an Israeli flag and claimed the flag was 'offensive' and provocative’. [24] She apologised on a private Facebook post. [25]

On 25 July 2019, it was reported that councillor Majid Dar had shared Facebook comparing justifications made by the Nazis for the slaughter of Jews during the Holocaust with those made by Israel's army for its actions in Gaza. Another post stated that Zionism ‘keeps changing direction like a snake’, whilst replies to one of his other comments included ‘Kill all the Jews PERIOD’ and ‘Israel needs to stop existing’. [26] [27]

On 18 March 2020, Councillor Greg Stanton stood down from the Liberal Democrats to sit as an independent councillor. Although Councillor Stanton cited his reasons for leaving as "because I could no longer support [John Leech's] leadership", the Liberal Democrats told the Manchester Evening News that Stanton was under "investigation for unacceptable and obstructive behaviour". Councillor Stanton stated that the statement was "misleading". [28]

On 20 March 2020, The Manchester Evening News ran an article on independent councillor Kenneth Dobson in Clayton and Openshaw, after he spread conspiracy theories suggesting that the outbreak of COVID-19 was faked. A series of tweets labelling COVID-19 a ‘bogus virus’ and a ‘load of bol**x’ were posted on his Twitter page, alongside images posted describing the pandemic as ‘propaganda’ and conflating the spread of the virus with the rollout of 5G wireless networks. [29]

On 22 June 2020, Manchester Council's executive member for Finance and Human Resources was suspended by Labour group after allegations of sexual abuse were made against him on Twitter. [30] [31]

Leaders of the Opposition

Each ward is represented by three councillors. [35]

Blackburn with Darwen is a unitary authority area in Lancashire, North West England. It consists of the town of Blackburn and the market town of Darwen including other villages around the two towns. The population of the Unitary Authority taken at the 2011 census was 147,489. 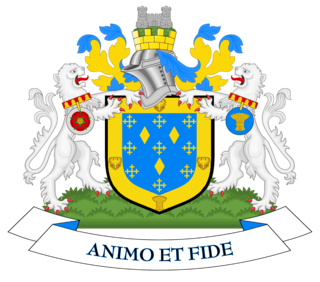 Stockport Metropolitan Borough Council is the local authority for the Metropolitan Borough of Stockport, Greater Manchester, England. The council is currently in no overall control, as at the 2016 local elections the Liberal Democrats lost their majority. Currently, Labour and the Liberal Democrats both have 26 seats, and the Conservatives have 8. There are also 3 independent councillors that represent the Heald Green Ratepayers.

John Sampson Macfarlane Leech is a British Liberal Democrat politician who is currently Leader of the Opposition on Manchester City Council. He was the Member of Parliament for Manchester Withington from 2005 to 2015. He was the first MP to speak out against the under-occupancy penalty in Parliament.

Mohammed Afzal Khan, is a British Labour Party politician who has been the Member of Parliament (MP) for the Manchester Gorton constituency since June 2017.

Sir Richard Charles Leese, CBE is an English politician in Manchester, England. He has been the leader of Manchester City Council since 1996 and a member of the Labour Party since 1984. On 6 May 2017, Leese was appointed Deputy Mayor for Business and Economy by Greater Manchester Combined Authority Mayor, and former Shadow Home Secretary, Andy Burnham.

Elections to Stockport Metropolitan Borough Council were held on 1 May 2008. One third of the council was up for election. The Liberal Democrats held overall control of the council.

The Liberal Democrats are a liberal political party in the United Kingdom. The party has 11 Members of Parliament in the House of Commons, 89 members of the House of Lords, five Members of the Scottish Parliament and one member in both the Welsh Parliament and the London Assembly. It formed a coalition government of the United Kingdom with the Conservative Party from 2010–2015. It is also currently in coalition with the Labour Party in the devolved Welsh government, and has also formed coalitions with Labour in Scotland.

Elections to Manchester City Council were held on 5 May 2016. One third of the council was up for election, with each successful candidate serving a two-year term of office, expiring in 2018, due to planned boundary changes. The Labour Party retained overall control of the council, managing to hold all but one seat contested and won by former Withington MP, John Leech. Leech's win signified the first gain for any party in Manchester other than Labour for the first time in six years.

Elections to Manchester City Council were held on 3 May 2018, as part of the 2018 United Kingdom local elections. Although the council is normally elected in thirds, all 96 council seats were up for election due to boundary changes. Labour retained its near-complete dominance of the council. The sole change was that the Liberal Democrats gained a second seat in Didsbury West.

The 2017 Aberdeen City Council election took place on 4 May 2017 to elect members of Aberdeen City Council. The election used the 13 wards created as a result of the Local Governance (Scotland) Act 2004, with each ward electing three or four Councillors using the single transferable vote system a form of proportional representation, with a total of 45 Councillors elected, an increase in 2 members from 2012.

Didsbury West is an area and electoral ward of Manchester, England. It is represented in Westminster by Jeff Smith MP for Manchester Withington. The 2011 Census recorded a population of 12,455.

Ancoats and Beswick is an electoral ward of Manchester, England created by the Local Government Boundary Commission for England (LGBCE) replacing the previous electoral wards of Ancoats & Clayton and Bradford for the local elections 2018.

Elections to Manchester City Council were held on 2 May 2019, as part of the 2019 United Kingdom local elections. In 2018 Labour retained its majority of the council with 94 seats to the Liberal Democrats making up the opposition of 2, led by former MP John Leech.

The Independent Group for Change, also known as Change UK, was a centrist, pro-European Union political party, founded in February 2019 and dissolved ten months later, shortly after all its MPs lost their seats in the 2019 general election. Its principal policy was support for a second referendum on European Union membership, in which it would campaign to remain in the EU. On economic issues it expressed a commitment to the social market economy. It was led at its dissolution by the former Conservative Party MP Anna Soubry.