listen ); spelled Neuß until 1968; Limburgish : Nüss [nʏs] ; Latin : Novaesium) is a city in North Rhine-Westphalia, Germany. It is located on the west bank of the Rhine opposite Düsseldorf. Neuss is the largest city within the Rhein-Kreis Neuss district. It is primarily known for its historic Roman sites, as well as the annual Neusser Bürger-Schützenfest. Neuss and Trier share the title of "Germany's oldest city"; and in 1984 Neuss celebrated the 2000th anniversary of its founding in 16 BCE.

Neuss was founded by the Romans in 16 BC as a military fortification ( castrum ) with the current city to the north of the castrum, at the confluence of the rivers Rhine and Erft, with the name of Novaesium.

Legio XVI Gallica ("Gallic 16th Legion") of the Roman army was stationed here in 43-70 AD. It was disbanded after surrendering during the Batavian rebellion (AD 70). [3]

Later a civil settlement was founded in the area of today's centre of the town during the 1st century AD. Novaesium, together with Trier (Augusta Treverorum), is one of the three oldest Roman settlements in Germany.

Neuss grew during the Middle Ages because of its prime location on several routes, by the crossing of the great Rhine valley, and with its harbour and ferry. During the 10th century, the remains of the martyr and tribune Saint Quirinus, not to be confused with the Roman god Quirinus, had been relocated to Neuss. This resulted in pilgrimage to the shrine of St. Quirinus even from countries beyond the borders of the Holy Roman Empire. Neuss was first documented as a town in 1138.

One of the main events in the town's history is the siege of the town in 1474–75 by Charles the Bold, Duke of Burgundy, that lasted for nearly a year. The citizens of Neuss withstood the siege and were therefore rewarded by the Holy Roman Emperor Frederick III. The town was granted the right to mint its own coins and to carry the imperial coat of arms, the imperial eagle and the crown, in the town's own coat of arms. Neuss became a member of the Hanseatic League, although it was never accepted by the other members of the League.

In 1586, more than two-thirds of the city was destroyed by fire, and several wars during the reign of King Louis XIV of France resulted in worsening finances for Neuss. Its importance as a place for trading declined rapidly, and from the mid-17th century onwards, Neuss became a place only important for its agriculture.

Until the late 18th century, Neuss belonged to the Electorate of Cologne. From 1794 to 1814, Neuss was part of France during the reign of Napoleon. In 1815 after the Napoleonic Wars, Neuss became part of the Kingdom of Prussia, and was reorganized as a district with the municipalities of Neuss, Dormagen, Nettesheim, Nievenheim, Rommerskirchen and Zons. The town had a population of 6,333 at that time. It was part of the Prussian Province of Jülich-Cleves-Berg (1815–22) and its successor, the Rhine Province (1822–1946).

Neuss regained its economic power in the 19th century, with expansion of the harbour in 1835, and increasing industrial activity. The city's boundaries were expanded in 1881. Neuss became part of the new state of North Rhine-Westphalia in 1946.

In 1968 the spelling of the name was changed from Neuß to Neuss. In 1975 the town of Neuss and the district of Grevenbroich were joined to form the district of Rhein-Kreis Neuss with a population of 440,000 and its seat of government in Neuss. Neuss is also home to Toshiba's European headquarters.

Mayors and Lord Mayors since 1849

One sports club is Neusser Schlittschuh-Klub. Their sections are figure skating, ice stock sport and, as the only club in Germany, bandy. With the lack of a large ice surface, the variety rink bandy is practiced. [5] There are also two football clubs in the city of Neuss, VfR Neuss Football Club, and DJK Novesia Neuss. There is also a fieldhockey club, HTC Schwarz-Weiss Neuss, and TC Blau-Weiss Neuss, a famous tennis club where Nadal began his career. And an American Football Club, the Neuss Frogs. Besides Neuss owns an all-weather racecourse called "Galopprennbahn Neuss".

Iserlohn is a city in the Märkischer Kreis district, in North Rhine-Westphalia, Germany. It is the largest city by population and area within the district and the Sauerland region.

Erkrath is a town in the district of Mettmann, in North Rhine-Westphalia, Germany.

Hilden is a town in the German state of North Rhine-Westphalia. It is situated in the District of Mettmann, 10 km (6.21 mi) west of Solingen and 15 km (9.32 mi) east of Düsseldorf on the right side of the Rhine. It is a middle sized industrial town with a forest and numerous attractions. 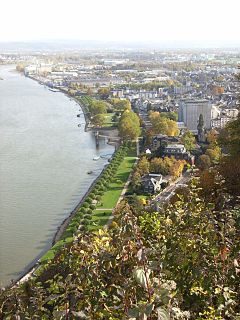 Andernach is a town in the district of Mayen-Koblenz, in Rhineland-Palatinate, Germany, of about 30,000 inhabitants. It is situated towards the end of the Neuwied basin on the left bank of the Rhine between the former tiny fishing village of Fornich in the north and the mouth of the small river Nette in the southeast, just 13 miles (21 km) north of Koblenz, with its five external town districts: Kell, Miesenheim, Eich, Namedy, and Bad Tönisstein.

Gimborn Castle is a former moated castle situated in a remote valley of the upper Leppe in the municipality of Marienheide in the Oberbergischer Kreis of North Rhine-Westphalia, Germany.

Kaarst is a town in Germany. It lies in the district of Rhein-Kreis Neuss in North Rhine-Westphalia. It is 5 km west of Neuss and 12 km east of Mönchengladbach.

The Siege of Neuss, from 1474–75, was linked to the Cologne Diocesan Feud and part of the Burgundian Wars. The siege, led by Charles the Bold against the Imperial City of Neuss, was unsuccessful. Charles was compelled by the approach of a powerful Imperial army to raise the siege.

Oberwesel is a town on the Middle Rhine in the Rhein-Hunsrück-Kreis (district) in Rhineland-Palatinate, Germany. It belongs to the Verbandsgemeinde Hunsrück-Mittelrhein, whose seat is in Emmelshausen.

Zons, formerly known as Feste Zons(Fortress Zons), today officially called Stadt Zons is an old town in Germany on the west bank of the Lower Rhine between Cologne and Düsseldorf. It has been a part (Stadtteil) of the town of Dormagen since 1975. In 2010 its population was 5,370.

A Schützenfest is a traditional festival or fair featuring a target shooting competition in the cultures of Germany, the Netherlands and Switzerland.

Hamm is an urban borough of Düsseldorf.

Süchteln is a section of Viersen, a town which is the centre of the Kreis of Viersen in North Rhine-Westphalia, Germany.

The Largest Fair on the Rhine is a fair in Düsseldorf, drawing more than 4 million visitors annually, is one of Germany’s biggest fairs. It takes place the third week in July on the left bank of the Rhine River, in the district Düsseldorf-Oberkassel, and features beer and food tents, amusement park rides, vendors, etc. as well as 10 days of various associated events and activities.

The Neuss Schützenfest, officially the Neuss' citizens' marksmen's festival, is the Schützenfest of the German city of Neuss. It is held annually on the last weekend in August. With more than 7,500 parading marksmen it is smaller than the Hanover Schützenfest but is regarded as the largest marksmen's festival in the world that is organized by a single association and does not include platoons from other cities. The year 2011 saw the largest number of trooping marksmen to date, with 6951 marksmen taking part in the parade. The marksmen's festival with its royal parade, several processions, royal shooting competition and a great number of accompanying events is a social highlight of the city of Neuss and the surrounding area and attracts up to a million visitors each year. The largest number of visitors to date was recorded in 2007, with 1.5 million people coming to watch the Schützenfest.

The Basilica of St. Quirinus also called Minster-Basilica of St. Quirinus of Neuss Is a Catholic basilica that was erected in the city of Neuss in the western part of the present state of North Rhine-Westphalia in Germany between 1209 and 1230. The basilica is one of the best examples of Romanesque churches in Germany. It has a strong Lombard influence but in principle shows the first signs of Gothic. In its bell tower the first semicircular arches appear. This form of arch becomes centuries later in one of the marks that marked the Gothic style.