Speed skating at the Winter Olympics

Speed skating has been featured as a sport in the Winter Olympics since the first winter games in 1924. Women's events were added to the Olympic program for the first time in 1960 Squaw Valley Olympics.

The governing body for speed skating, the International Skating Union (ISU), was included in the list of recognized federations when the International Olympic Committee was founded, but was first discussed seriously for the 1908 Summer Olympics in London. No speed skating events were contested, although figure skating – also governed by the ISU – was on the programme. The preliminary calendar for the 1916 Summer Olympics, to be held in Berlin, listed a 3-event allround competition, [1] but these Games were cancelled because of World War I.

The International Winter Sports Week in Chamonix, retro-actively dubbed the 1924 Winter Olympics, contained five speed skating events. Uncommon for the time, it not only included an all-round competition, but also awarded medals for the individual distances: 500 m, 1500 m, 5000 m and 10000 m. The all-round event was dropped before the 1928 Games, even though it remained the only World Championship format in the sport until the 1970s; single distance World Championships were not established until 1996.

The 1932 speed skating events were held according to the North American rules, meaning the skaters competed in small packs of skaters (the format paved the way for the development of short track speed skating), instead of the common against-the-clock format. These Games in Lake Placid, New York also saw the first female speed skaters at the Olympics in a set of demonstration events, with all victories being achieved by North American athletes. Women's events were also set to be held at the 1940 Winter Olympics, [1] which were cancelled. After the war, they were withdrawn again by the decision of the IOC until the 1960 Olympics in Squaw Valley, when the women skated 500 m, 1000 m, 1500 m and 3000 m.

Following the introduction of World Sprint Championships in the early 1970s, the 1000 m for men was added in Innsbruck 1976, while the women's 5000 m, reinstated by the ISU as an official distance in 1981, made its Olympic debut in 1988. The latest addition to the Olympic speed skating programme is the team pursuit, which was added for the 2006 Turin Games. Its inclusion was remarkable as it had not yet been contested at a senior World Championship in the form skated at the Olympics at the time of inclusion. It had however been contested at a senior World Championship, the Dutch team won the 2005 title in Inzell, but in that form they only had to skate once and be the fastest, while the Olympic form required three starts.

At the 2010 Winter Olympics, Haralds Silovs became the first athlete in Olympic history to participate in both short track (1500m) and long track (5000m) speed skating, and the first to compete in two different disciplines on the same day. [2] [3] [4] [5]

The following table shows when events were contested at each Games. Women's events were demonstrated in 1932.

Updated after the 2018 Winter Olympics.

Number of speed skaters by country 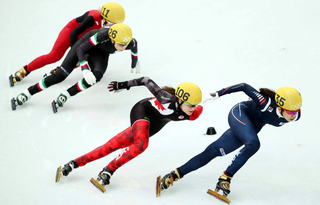 1924 in sports describes the year's events in world sport. 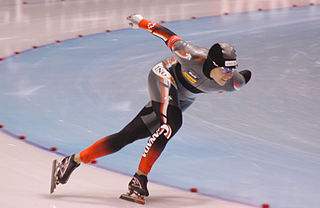 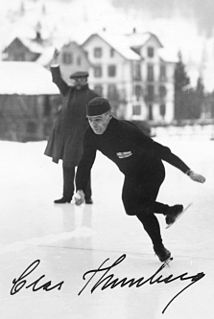 Nagano Olympic Memorial Arena, or M-Wave, is a covered speed skating oval in the city of Nagano, Japan. M-Wave, which opened in November, 1996, was constructed for the speed skating events at the 1998 Winter Olympics. It was Japan's first International Skating Union (ISU) standard indoor 400m double-track, and only second one in Japan. The other, Meiji Hokkaido-Tokachi Oval, is located in Obihiro, Hokkaido.

Roald Morel Larsen was a World Champion speed skater from Norway. He was born in Kristiania . Roald Larsen's parents were Hans Jacob Larsen, a glazier born in Kristiania in 1870, and Lydia Larsen, born in Porsgrunn in 1865. They had four children, all sons: Jaan Harald (1891), Lyder Ragnar (1895), Roald Morel (1898), and Gelgjermo Stone (1899).

Short track speed skating at the Vancouver 2010 Olympics was held at the Pacific Coliseum, Vancouver, British Columbia on 13–26 February 2010. 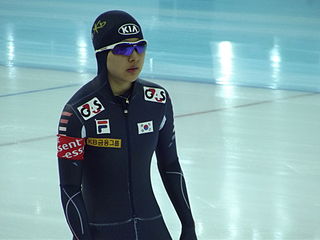 Speed skating at the 2014 Winter Olympics was held at the Adler Arena, Sochi, Russia, between 8 and 22 February 2014.

The 2013–14 ISU Speed Skating World Cup, officially the Essent ISU World Cup Speed Skating 2013–2014, was a series of international speed skating competitions that ran the entire season. The season started on 8 November 2013 in Calgary, Alberta, Canada, and concluded with the final on 16 March 2014 in Heerenveen, Netherlands. Compared to previous seasons, there were fewer competition weekends; the season was restricted due to the 2014 Winter Olympics, which were arranged in Sochi, Russia, during February 2014. In total, six competition weekends were held at six different locations, twelve cups were contested, and 72 races took place.

The men's 5000 metres speed skating competition of the 2014 Sochi Olympics was held at 15:30 MSK on 8 February 2014 at the Adler Arena Skating Center. All the medals were won by Dutch athletes — Sven Kramer, who set a new Olympic record, Jan Blokhuijsen (silver), and Jorrit Bergsma (bronze).

The following is about the qualification rules and the quota allocation for the speed skating events at the 2014 Winter Olympics.

The 2014–15 ISU Speed Skating World Cup, officially the Essent ISU World Cup Speed Skating 2014–2015, was a series of international speed skating competitions that ran the entire season. The season started on 14 November 2014 in Obihiro, Japan, and ended with the final on 22 March 2015 in Erfurt, Germany. In total, seven competition weekends were held at six different locations, twelve cups were contested, and 80 races took place.

The 2015–16 ISU Speed Skating World Cup, officially the ISU World Cup Speed Skating 2015–2016, was a series of international speed skating competitions that ran the entire season. The season started on 13 November 2015 in Calgary, Alberta, Canada, and ended with the final on 13 March 2016 in Heerenveen, Netherlands.

The 2017–18 ISU Speed Skating World Cup, officially the ISU World Cup Speed Skating 2017–2018, was a series of international speed skating competitions that ran the entire season. Compared to previous seasons, there were fewer competition weekends; the season was restricted due to the 2018 Winter Olympics, which were arranged in Pyeongchang, South Korea, during February 2018.

Media related to Speed skating at the Olympics at Wikimedia Commons