The Three Lakes Patrol Cabin was built in 1934 in Mount Rainier National Park as a district ranger station. The log cabin was built to a standard plan designed by W.G. Carnes, Acting Chief Architect of the National Park Service Branch of Plans and Designs, supervised by Thomas Chalmers Vint. The cabin measures about 13.5 feet (4.1 m) by 24 feet (7.3 m). It is a simple gable structure with a shed roof over the front door, supported by brackets. The eaves have a similar bracket detail. Log ends project prominently at the corners. It consists of a single room, unfinished apart from a wood floor. [2]

The cabin was placed on the National Register of Historic Places on March 13, 1991. [1] 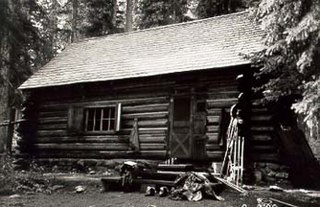 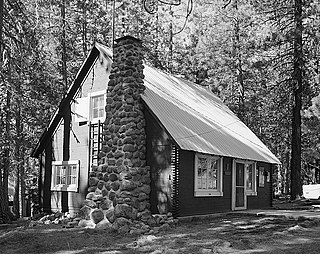 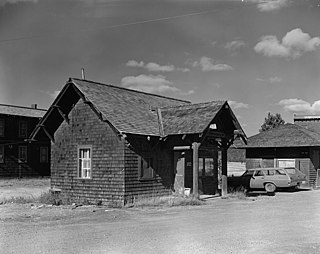 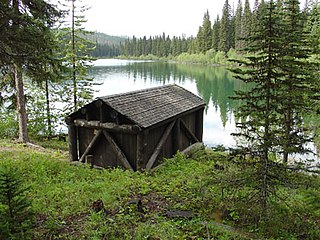 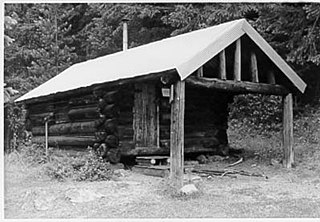 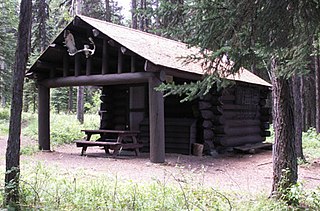 The Bowman Lake Patrol Cabin in Glacier National Park, Montana, United States, is a rustic back-country log cabin. Built in 1934, the cabin has a single room, with a front porch extension to create a shelter from snowfall.

The Andrew Berg Cabin near Soldotna, Alaska was built by fisherman and trapper Andrew Berg in 1902. It was listed on the National Register of Historic Places in 2000. 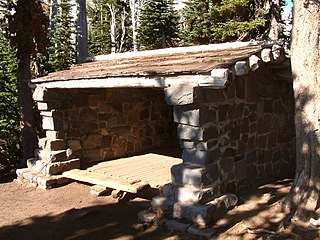 Indian Henry's Patrol Cabin is an early National Park Service patrol cabin in Mount Rainier National Park. The cabin was built in 1915–1916 at an elevation of 5,300 feet (1,600 m) in an area of the park known as "Indian Henry's Hunting Ground," which had been used in the 19th century by the Cowlitz and Nisqually tribes. "Indian Henry" was an Indian guide who accompanied James Longmire in his explorations of the area. The Indian Henry's area became a tourist destination with the 1908 establishment of the "Wigwam Camp," a tent camp which was abandoned in 1918. The area remained as a headquarters for backcountry patrols; the cabin was the first such facility in the park. 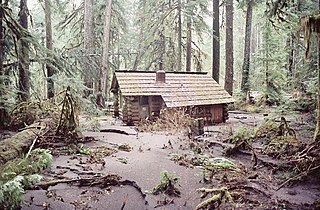 The Ipsut Creek Patrol Cabin was built by the United States National Park Service in 1933 in Mount Rainier National Park to house backcountry rangers. The log cabin resembles other cabins at Huckleberry Creek, Lake James and Three Lakes, all built to standard plans from the Park Service Branch of Plans and Designs, supervised by Acting Chief Architect W.G. Carnes. The cabin is approximately 24 feet (7.3 m) by 14 feet (4.3 m), with a lean-to storage shed to the rear.

The Lake George Patrol Cabin was built in 1934 by the National Park Service in Mount Rainier National Park as a backcountry patrol station and hiker's shelter. The single-story wood-frame building measures about 26.5 feet (8.1 m) by 12 feet (3.7 m). Initially intended as a horse barn, it was converted for ranger accommodation, replacing a 1921 structure. The first cabin survived until 1969, when it was destroyed by a falling tree. 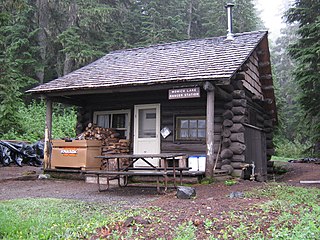 The Mowich Lake Patrol Cabin is one of the oldest backcountry ranger stations in Mount Rainier National Park. Built in 1922, it is located in the western portion of the park and is adjacent to the largest lake in the park. It was used by rangers on boundary patrol, and is located on the Wonderland Trail. The log cabin encloses a 15.5-foot (4.7 m) by 17.5-foot (5.3 m) area, with porch projecting 5.75 feet (1.75 m) to the front. The design was influential in the development of patrol cabin designs in the 1930s. The cabin serves as a cache point for hikers on the Wonderland Trail. 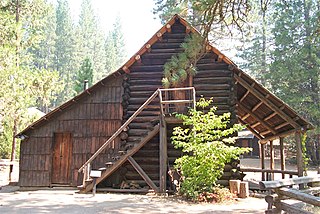 The Hodgdon Homestead Cabin was built by Jeremiah Hodgdon in 1879 in the Aspen Valley area of what became Yosemite National Park. The two-story log cabin, measuring 22 feet (6.7 m) by 30 feet (9.1 m), was located in an inholding in the park, owned by Hodgdon's descendants. In the 1950s the family proposed to demolish the structure. The National Park Service acquired it and moved it to its Pioneer Yosemite History Center at Wawona, where the restored cabin is part of an exhibit on early settlement and development of the Yosemite area. In addition to housing Hogdon, the cabin housed workers on the Great Sierra Wagon Road in the 1880s, as a patrol cabin for U.S. Army troops who managed the new national park in the 1890s, and as a historic landmark at the old Aspen Valley Resort. 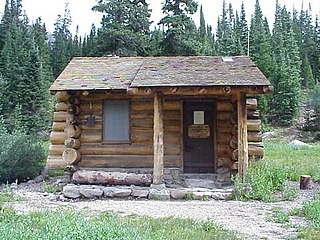 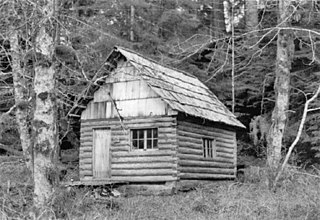 The Botten Cabin, also known as the Wilder Patrol Cabin, was built in 1929 in the Elwha River valley for Henry H. Botten. The hunting cabin is located in the backcountry of what in 1938 became Olympic National Park in the U.S. state of Washington. The remote cabin was built by local settler Grant Humes for Botten, who used it until his death in 1953. Botten's widow continued to apply for special use permits into the 1960s. More recently, the National Park Service has used the cabin as a backcountry patrol cabin. The cabin is one of only two former private hunting camps left in Olympic National Park. 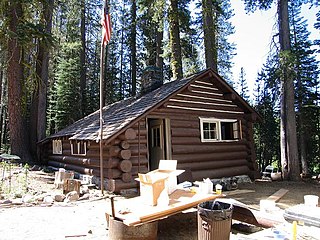 The Buck Camp Patrol Cabin in Yosemite National Park was listed on the National Register of Historic Places in 2014.