A juicio de residencia (literally, judgment of residence) was a judicial procedure of Castilian law and the Laws of the Indies. It consisted of this: at the termination of a public functionary's term, his performance in office was subject to review, and those with grievances against him were entitled to a hearing. This was largely an automatic procedure, and did not imply prior suspicion of misconduct.

The Crown of Castile was a medieval state in the Iberian Peninsula that formed in 1230 as a result of the third and definitive union of the crowns and, some decades later, the parliaments of the kingdoms of Castile and León upon the accession of the then Castilian king, Ferdinand III, to the vacant Leonese throne. It continued to exist as a separate entity after the personal union in 1469 of the crowns of Castile and Aragon with the marriage of the Catholic Monarchs up to the promulgation of the Nueva Planta decrees by Philip V in 1715.

The official was not allowed to leave the place where he exercised his authority, nor to assume another office, until the conclusion of this judicial inquiry. Generally, the person charged with directing the inquiry, called the juez de residencia (residence judge), was that individual already named to succeed to the position. The penalties for conviction varied, but generally consisted of fines.

The juicio de residencia took on great importance in the administration of the Indies, perhaps because of the great distances involved and the difficulty of direct supervision by the Crown. It extended from the viceroys and the presidents of the Audiencia to the alcaldes and the alguaciles (judicial officials, sometimes translated as sheriffs). With the entrance into force of the Spanish Constitution of 1812, the procedure no longer applied.

A viceroy is an official who runs a country, colony, city, province, or sub-national state, in the name of and as the representative of the monarch of the territory. The term derives from the Latin prefix vice-, meaning "in the place of" and the French word roy, meaning "king". A viceroy's territory may be called a viceroyalty, though this term is not always applied. The adjective form is viceregal, less often viceroyal. The term vicereine is sometimes used to indicate a female viceroy suo jure, although viceroy can serve as a gender-neutral term. Vicereine is more commonly used to indicate a viceroy's wife.

Alcalde, or Alcalde ordinario, is the traditional Spanish municipal magistrate, who had both judicial and administrative functions. An alcalde was, in the absence of a corregidor, the presiding officer of the Castilian cabildo and judge of first instance of a town. Alcaldes were elected annually, without the right to reelection for two or three years, by the regidores of the municipal council. The office of the alcalde was signified by a staff of office, which they were to take with them when doing their business. A woman who holds the office is termed an Alcaldesa. 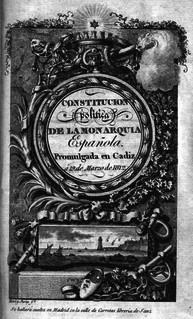 The Political Constitution of the Spanish Monarchy, also known as the Constitution of Cádiz and as La Pepa, was the first Constitution of Spain and one of the earliest constitutions in world history. It was established on 19 March 1812 by the Cortes of Cádiz, the first Spanish legislature. With the notable exception of proclaiming Roman Catholicism as the official and sole legal religion in Spain, the constitution was one of the most liberal of its time: it affirmed national sovereignty, separation of powers, freedom of the press, free enterprise, abolished feudalism, and established a constitutional monarchy with a parliamentary system. It was one of the first constitutions that allowed universal male suffrage, through a complex indirect electoral system. It was repealed by King Ferdinand VII in 1814 in Valencia, who re-established absolute monarchy.

Originally, every viceroy had to pass his juicio de residencia before his successor could take office. But in the eighteenth century viceregal juicios were conducted after the outgoing viceroy had returned to Spain. During the lengthy process (up to six months), the degree of the viceroy's compliance with his instructions was analyzed, his job performance was reviewed, and many testimonies were collected from different parties.

Another formula the Crown used to control its officials, including the viceroy in his capacity as president of the Audiencia, was the visitador who collected visitas. The visitador was an inspector named at the pleasure of the king to investigate a particular administration. Like the juicio, this institution had the aim of discovering abuses committed by the authorities, and proposing necessary reforms.

Blessed Juan de Palafox y Mendoza was a Spanish politician, administrator, and Catholic clergyman in 17th century Spain and a viceregal of Mexico.

Pedro Moya de Contreras, prelate and colonial administrator who held the three highest offices in the Spanish colony of New Spain, namely inquisitor general, Archbishop of Mexico, and Viceroy of Mexico, September 25, 1584 - October 17, 1585. He was the 6th Viceroy, governing from September 25, 1584 to October 16, 1585. During this interval he held all three positions.

Álvaro Manrique de Zúñiga, 1st Marquess of Villamanrique, Spanish nobleman and the seventh viceroy of New Spain. He governed from October 17, 1585 to January 26, 1590.

Antonio María de Bucareli y Ursúa was a Spanish military officer, governor of Cuba, and viceroy of New Spain (1771–1779). He was Knight of Justice of the Order of Malta.

Diego Delgadillo was a judge of the first Audiencia of New Spain, which governed the colony from December 9, 1528 to January 9, 1531.

Juan Ortiz de Matienzo was a Spanish colonial judge and a member of the first Real Audiencia in the New World, that of Santo Domingo, in 1512. From December 9, 1528 until January 9, 1531, he was a member of the First Audiencia of Mexico City, which was the governing body of New Spain during that period.

Francisco Antonio de Echávarri was a Spanish colonial official in New Spain. He was president of the Audiencia of Mexico City in 1760 when Viceroy Agustín de Ahumada died in office. In that capacity, Echávarri served as acting victory until the arrival of Francisco Cajigal de la Vega, Ahumada's successor. He served from February 5, 1760 to April 28, 1760.

Francico Romá y Rosell was a Spanish royal official in Valladolid and New Spain. He was the first regent of the Real Audiencia of Mexico. In this capacity, after the death of Viceroy Antonio María de Bucareli y Ursúa and before the arrival of his successor, Martín de Mayorga, Romá served as interim governor of the colony from April 9, 1779 to August 23, 1779.

A corregidor was a local administrative and judicial official in Spain and in its overseas empire. They were the representatives of the royal jurisdiction over a town and its district.