Last updated October 13, 2020
Leader of the Comanche in the late 18th century

Cuerno Verde (unknown – September 3, 1779) was a leader of the Comanche, likely of the Kotsoteka Comanche, in the late 18th century.

Cuerno Verde, which translates to "Green Horn" in English, is the Spanish name originally given to Tavibo Naritgant ("Dangerous Man") because of the green tinted horns that he wore on his head-dress in battle. The English translation of the original Comanche name is "Dangerous Man" . [1] His son inherited both the name and the distinctive head dress from the father, who was killed in combat against the Spanish at Ojo Caliente, in what is now New Mexico, in October 1768. [2]

The success of a series of raids led by the younger Tabivo Naritgant into Nuevo Mexico during the mid to late 1770s called him to the attention of the Spanish Viceroy in Mexico. The Viceroy offered Juan Bautista de Anza the governorship of Nuevo Mexico in exchange for him dealing with Tavibo Naritgant. De Anza moved to Nuevo Mexico and assumed the Governorship and for a year, studied past expeditions against and encounters with Cuerno Verde. A year later, in August 1779, de Anza led a mixed force of 500 to 800 Spanish troops and Ute, Apache, and Pueblo auxiliaries on a punitive expedition against the Comanche. [3] [4]

The Comanche and Spanish forces met in a series of running battles between August 31 and September 3, 1779; Tabivo Naritgant was killed in combat, along with his first-born son and fifteen others, on September 3 somewhere between the present day cities of Pueblo, Colorado and Colorado City, Colorado, probably in a gully of the St. Charles River. Hostilities in the area decreased following his death. [5]

Although Anza called him a "cruel scourge" and made note in his diaries of atrocities attributed to him, many modern Comanches question the veracity of Anza's statements and maintain that Tabivo Naritgant was only meeting the obligations of a responsible Comanche leader of the period. [7]

Tabivo Naritgant gave the English translation of his Spanish name to Greenhorn Mountain and the Greenhorn Valley in south-central Colorado. [1] 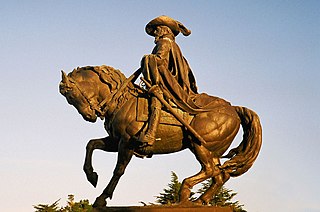 Santa Fe de Nuevo México was a Kingdom of the Spanish Empire and New Spain, and later a territory of independent Mexico. The first capital was San Juan de los Caballeros from 1598 until 1610, and from 1610 onward the capital was La Villa Real de la Santa Fe de San Francisco de Asís. The name "New Mexico", the capital in Santa Fe, the government building, militia or citizen-soldiers (vecinos), and rule of law were retained when the New Mexico Territory, later the U.S. State of New Mexico, became a part of the United States. The New Mexican citizenry, primarily consisting of Hispano, Pueblo, Navajo, Apache, and Comanche peoples, became citizens of the United States as a result of the Treaty of Guadalupe Hidalgo.

San Ildefonso Pueblo is a census-designated place (CDP) in Santa Fe County, New Mexico, United States, and a federally recognized tribe, established c. 1300 C.E. The Pueblo is self-governing and is part of the Santa Fe, New Mexico Metropolitan Statistical Area. The population was 524 as of the 2010 census, reported by the State of New Mexico as 1,524 in 2012, and there were 628 enrolled tribal members reported as of 2012 according to the Department of the Interior. San Ildefonso Pueblo is a member of the Eight Northern Pueblos, and the pueblo people are from the Tewa ethnic group of Native Americans, who speak the Tewa language.

Juan de Oñate y Salazar was a Spanish conquistador from New Spain, explorer, and colonial governor of the province of Santa Fe de Nuevo México in the viceroyalty of New Spain. He led early Spanish expeditions to the Great Plains and Lower Colorado River Valley, encountering numerous indigenous tribes in their homelands there. Oñate founded settlements in the province, now in the Southwestern United States. A monument in Alcalde, New Mexico was removed on June 15, 2020. 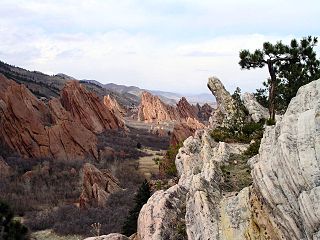 The human history of Colorado extends back more than 14,000 years. The region that is today the state of Colorado was first inhabited by Native American people. The Lindenmeier Site in Larimer County, Colorado, is a Folsom culture archaeological site with artifacts dating from approximately 8710 BCE. 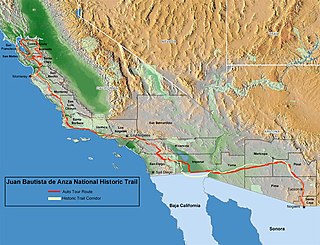 The Comancheros, 18th- and 19th-century traders based in northern and central New Mexico, made their living by trading with the nomadic Great Plains Indian tribes in northeastern New Mexico, West Texas, and other parts of the southern plains of North America. Comancheros became so named because the Comanches, in whose territory they traded, were considered their best customers. They traded manufactured goods, flour, tobacco, and bread for hides, livestock and slaves from the Comanche. As the Comancheros did not have sufficient access to weapons and gunpowder, there is disagreement about how much they traded these with the Comanche. 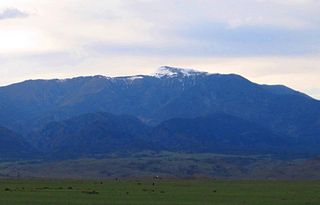 The history of New Mexico is based on archeological evidence, attesting to varying cultures of humans occupying the area of New Mexico since approximately 9200 BC, and written records. The earliest peoples had migrated from northern areas of North America after leaving Siberia via the Bering Land Bridge. Artifacts and architecture demonstrate ancient complex cultures in this region. 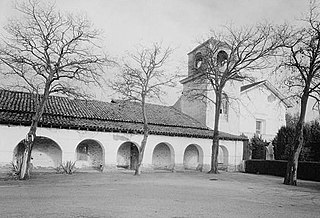 Antonio Valverde y Cosío (1670–1728) was a prominent entrepreneur and Spanish soldier who served as acting governor of Santa Fe de Nuevo México in 1716 and as interim governor of this territory from 1718 to 1721. His politics were based, in large part, on stopping the French invasion of New Mexico.

Tomás Vélez Cachupín was a colonial judge, and the Spanish colonial governor of Santa Fe de Nuevo México province, located in the northern Viceroyalty of New Spain , from 1749 to 1754 and 1762 to 1767. 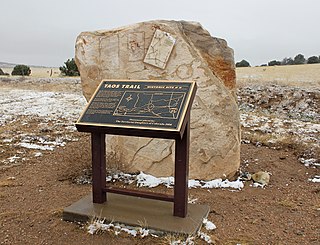 The Taos Mountain Trail was the historic pathway for trade and business exchanges between agrarian Taos and the Great Plains (Colorado) from pre-history through the Spanish Colonial period and into the time of the European and American presence. The Taos Mountain Trail, between northern New Mexico and southern Colorado, connected the high mountain traders and their trading partners north and south of the Sangre de Cristo Mountains. Also called the Trapper's Trail, the pathway was only wide enough for people on foot or horses in single file, but it shortened a trip from Taos to the plains farther north from nearly two weeks to three days in good weather. The Taos Mountain Trail was also known as the Sangre de Cristo Trail and the Aztec Trail. 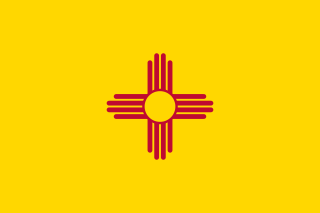 The Hispanos of New Mexico, also known as Neomexicanos, or "Nuevomexicanos" are an ethnic group primarily residing in the U.S. state of New Mexico, as well as the southern portion of Colorado. They are typically variously of Iberian, Criollo Spaniard, Mestizo, and Genízaro heritage, and are descended from Spanish-speaking settlers of the historical region of Santa Fe de Nuevo México, which makes up the present day U.S. states of New Mexico, southern Colorado, and parts of Arizona, Texas, and Utah. Neomexicanos speak New Mexican English, Neomexicano Spanish, or both bilingually, and identify with the culture of New Mexico displaying patriotism in regional Americana, pride for various cities and towns such as Albuquerque or Santa Fe, and expressing through New Mexican cuisine and New Mexico music, as well as in Ranchero and U.S. Route 66 cruising lifestyles. Alongside Californios and Tejanos, they are part of the larger Hispano communities of the United States, which have lived in the American Southwest since the 16th century or earlier. The descendants of these culturally mixed communities make up an ethnic community of more than 340,000 in New Mexico, with others in southern Colorado.

Bernardo de Miera y Pacheco was "perhaps the most prolific and important cartographer of New Spain" as well as an artist, particularly as a Santero. He has been called a polymath, being "proficient in astronomy, cartography, mathematics, geography, geology, geometry, military tactics, commerce, husbandry, oenology, metallurgy, languages, iconology, iconography, liturgy, painting, sculpture and drawing." 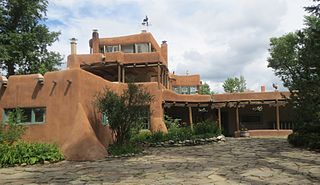 Taos Downtown Historic District is a historic district in Taos, New Mexico. Taos "played a major role in the development of New Mexico, under Spanish, Mexican, and American governments." It a key historical feature of the Enchanted Circle Scenic Byway of northern New Mexico.