Triozidae is one of seven families collectively referred to as jumping plant lice. They have traditionally been considered part of a single family, Psyllidae, but recent classifications divide the group into a total of seven families; most of the genera (over 70) remain in the Psyllidae, but Triozidae is the second-largest family in the group, containing 27 genera, and a number of pest species.

The World Psylloidea Database by D. Ouvrard: Triozidae in Psyl'list (in French, English, Spanish, and German) 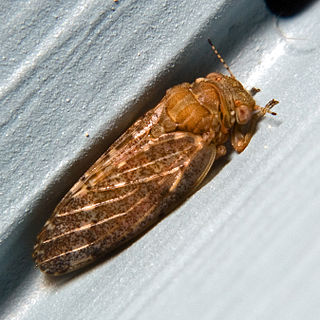 Psyllidae, the jumping plant lice or psyllids, are a family of small plant-feeding insects that tend to be very host-specific, i.e. each plant-louse species only feeds on one plant species (monophagous) or feeds on a few closely related plants (oligophagous). Together with aphids, phylloxerans, scale insects and whiteflies, they form the group called Sternorrhyncha, which is considered to be the most "primitive" group within the true bugs (Hemiptera). They have traditionally been considered a single family, Psyllidae, but recent classifications divide the group into a total of seven families; the present restricted definition still includes more than 70 genera in the Psyllidae. Psyllid fossils have been found from the Early Permian before the flowering plants evolved. The explosive diversification of the flowering plants in the Cretaceous was paralleled by a massive diversification of associated insects, and many of the morphological and metabolic characters that the flowering plants exhibit may have evolved as defenses against herbivorous insects.

The genus Orius consists of omnivorous bugs in the family Anthocoridae. Adults are 2–5 mm long and feed mostly on smaller insects, larva and eggs, such as spider mites, thrips, jumping plant lice, and white fly, but will also feed on pollen and vascular sap.

Psylloidea is a superfamily of true bugs, including the jumping plant lice and others which have recently been classified as distinct families.

Psylla pyri, commonly known as the pear psylla or pear psyllid, is a true bug in the family Psyllidae. Originating in Europe and Asia, it has spread to North America. It is a pest of pear trees, sucking the sap, damaging the foliage, flowers and fruit and diminishing the crop.

Aacanthocnema is a genus of bugs from the jumping plant lice family (Triozidae). The genus is endemic to Australia, and currently contains six species.

Diaphorina citri, the Asian citrus psyllid, is a sap-sucking, hemipteran bug in the family Liviidae. It is one of two confirmed vectors of citrus greening disease. It has a wide distribution in southern Asia and has spread to other citrus growing regions.

The African citrus psyllid is a sap-sucking insect, a hemipteran bug in the family Triozidae. It is an important pest of citrus, being one of only two known vectors of the serious citrus disease, huanglongbing or citrus greening disease. It is widely distributed in Africa. The other vector is the Asian citrus psyllid, Diaphorina citri.

Psylla is a genus of sap-sucking insects belonging to the order Hemiptera. There are at least 110 described species in Psylla. Species within the genus feed on various host plants.

Trioza is a genus of sap-sucking bugs in the family Triozidae.

Anthocoris nemoralis is a true bug in the family Anthocoridae. The species is native to Europe and is introduced in North America. It is a predator of aphids, spider mites and jumping plant lice, and is therefore used as a biological pest control agent.

Psylla buxi, known generally as the boxwood psyllid or box sucker, is a species of plant-parasitic hemipteran in the family Psyllidae.

Psyllinae is a subfamily of plant-parasitic hemipterans in the family Psyllidae. There are about 12 genera and at least 40 described species in Psyllinae.

Psylla carpinicola is a species of plant-parasitic hemipteran in the family Psyllidae.

Cacopsylla pyricola, commonly known as the pear sucker, is a true bug in the family Psyllidae and is a pest of pear trees (Pyrus). It originated in Europe, was introduced to the United States in the early nineteenth century and spread across the country in the next century.

Trioza centranthi is a sap-sucking hemipteran bug in the family Triozidae which creates galls on the leaves and flowers of Centranthus and Valerianella species. It was first described by Jean Nicolas Vallot, a French entomologist in 1829 and is found in Europe. 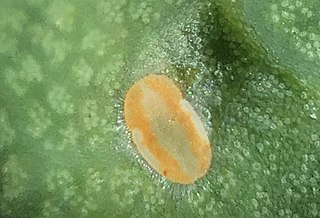 Trioza remota is a sap-sucking hemipteran bug in the family Triozidae which creates galls on the leaves of oak.

Trioza eugeniae or the syzygium leaf psyllid, lillypilly psyllid, and eugenia psyllid is a sap-sucking hemipteran bug in the family Triozidae which creates galls on the leaves of Syzygium paniculatum. This species is native to Australia and has been introduced into California.

Psylla alni is a species of psyllid, a plant-feeding hemipteran in the family Psyllidae.

Trioza alacris is a sap-sucking hemipteran bug in the family Triozidae which creates galls on the leaves of Laurus species. It is found in Europe.