An underground hangar is a type of hangar for military aircraft, usually dug into the side of a mountain for protection. It is bigger and more protected than a hardened aircraft shelter (HAS).

Eight Israeli air force F-16I Sufa fighter aircraft were damaged in the winter of early 2020 by flooding when they were improperly left inside underground hangars in a Negev desert airbase during severe flooding. [1] The Washington Post reported in 2012 based on the results FOIA requests to the US government that the US Army Corps of Engineers brought in US construction contractors to build installations in the south of Israel including underground hangars for fighter-bombers as a part of US military aid to Israel. [2]

In 1941 the Swedish Air Force began building its first underground hangar at Göta Air Force Wing (F 9), located near Gothenburg in south-west Sweden, it was commissioned in 1943. After World War II plans were made up for building underground hangars at every air force base that had suitable rock conditions. These ambitious building plans proved to be too expensive and were reduced to hangars at certain selected air bases. A second underground hangar was built in 1947 at Södertörn Air Force Wing (F 18) which began operating in 1950. After that plans were finalized for building underground hangars capable of surviving close hits by tactical nuclear weapons. This required that these new hangars be much deeper, with 25 to 30 meters of rock cover, and heavy-duty blast doors in concrete. The Saab 37 Viggen aircraft was designed with a folding tail fin to fit into low hangars. The Aeroseum an aircraft museum open to the public in Gothenburg is housed in the larger cold war era Underground Hangar at Säve.

Six Flugzeugkaverne (aircraft caverns), each with space for 30 or more aircraft, were constructed for the Swiss Air Force. One at Meiringen Air Base has been expanded to operate F/A-18 Hornet aircraft. [3] Originally, the plan for the aircraft cavern started its life as a design as a cavern-like aircraft hangar (German "Kavernenflugplatz") with the possibility launch combat aircraft from the mountain air base. High costs and technical difficulties prevented these from realisation [4] [5] The idea of using roads as runways was later part of the design demands for the Swiss motorway network. [6] [7]

Chiashan Air Force Base, located in Hualien, has an extensive underground hangar system which can accommodate two hundred aircraft. [8]

Chihhang Air Base in Taitung County can accommodate eighty aircraft in underground hangars. [9]

The "Objekat" series of military installations can be found in secluded but strategically important areas within the former Yugoslavia, and the construction of these military bases were initialized by the SFRJ's defence ministry.

During the Yugoslav Wars, most of these bases were used by the Serbs in certain operations, but due to extenuating circumstances imposed by the Croat forces, they were destroyed and later rendered useless for military use.

Nowadays, they are popular for urban exploration, however it is risky due to the chances of anti-personnel landmines being located in unexplored areas. However, some were spared the destruction due to other circumstances where the Serbs did not control these installations. An example of some that are still in use to this day is the D-0 Armijska Ratna Komanda nuclear bunker in Konjic, however the latter was turned into an art complex, but is still owned by the Ministry of Defence of Bosnia and Herzegovina.

The largest underground hangar complex in former Yugoslavia was at Željava Airport near Bihać, with enough space for 80 MiG-21s.

There are at least twenty major airfields with underground hangars in North Korea, including Onchon air base, Kang Da Ri Airport and Sunchon Airport. [10] 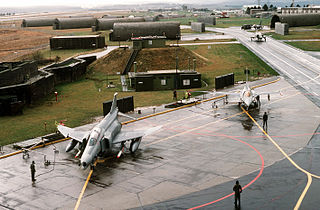 An air base is an aerodrome used as a military base by a military force for the operation of military aircraft.

Canadian Forces Base North Bay, also CFB North Bay, is an air force base located at the City of North Bay, Ontario about 350 km (220 mi) north of Toronto. The base is subordinate to 1 Canadian Air Division, Winnipeg, Manitoba, and is the centre for North American Aerospace Defense Command (NORAD) operations in Canada, under the Canadian NORAD Region Headquarters, also in Winnipeg. It is also home to the 1 Air Force, Detachment 2 of the United States Air Force.

The Swiss Air Force is the air component of the Swiss Armed Forces, established on 31 July 1914 as part of the army and in October 1936 as an independent service. 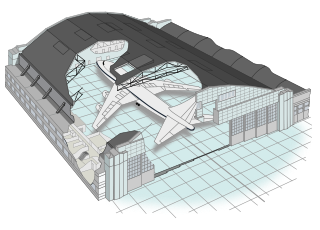 A hangar is a closed building structure to hold aircraft or spacecraft. Hangars are built of metal, wood, or concrete. The word hangar comes from Middle French hanghart, of Germanic origin, from Frankish *haimgard, from *haim and gard ("yard").

Lincoln Airport is a public/military airport five miles northwest of downtown Lincoln, the state capital, in Lancaster County, Nebraska. It is owned by the Lincoln Airport Authority and is the second-largest airport in Nebraska.

Željava Air Base, situated on the border between Croatia and Bosnia and Herzegovina under the Plješevica mountain, near the city of Bihać, Bosnia, was the largest underground airport and military air base in Yugoslavia, and one of the largest in Europe. The facilities are shared by the local governments of Bihać and Lika-Senj County in Croatia.

Svea Air Corps, also F 8 Barkarby, or simply F 8, is a former Swedish Air Force air corps wing with the main base located in Barkarby just north of the capital Stockholm on the east coast.

Göta Air Force Wing, also F 9 Säve, or simply F 9, was a Swedish Air Force wing with the main base located near Gothenburg in south-west Sweden.

Sion Airport is the airport of the city of Sion, Switzerland and is located 2.5 km southwest of Sion city in the Rhone Valley. The airport opened in 1935. 25,992 passengers were travelling through Sion Airport in the year 2019.

A highway strip, road runway or road base is a section of a highway, motorway or other form of public road that is specially built to act as a runway for (mostly) military aircraft and to serve as an auxiliary military air base. These runways allow military aircraft to continue operating even if their regular air bases, some of the most vulnerable targets in any war, are degraded or destroyed.

Aircraft cavern, a calque of the German word Flugzeugkaverne, is an underground hangar amongst others used by the Swiss Air Force.

Ubaydah Bin Al Jarrah Air Base is a Iraqi Army Aviation Corps base near Kut, Wasit Governorate, Iraq. It was captured by Coalition forces during Operation Iraqi Freedom in 2003.

Meiringen air base, also known as the Unterbach military airfield, is a Swiss military airbase located near the hamlet of Unterbach and the town of Meiringen, in the canton of Bern. It is one of three main airbases of the Swiss Air Force.

The Buochs Airport is a regional airport in the town of Buochs in the Canton of Nidwalden in Switzerland. It has a concrete runway with a length of 2000 meters and a width of 40 meters, several taxiways and hangars.

The Air Base Alpnach is a Swiss Air Force airfield near the town Alpnach in Canton of Obwalden in Switzerland. It has a concrete runway with a length of 1,500 meters (4,900 ft) and a width of 40 meters (130 ft), as well as several taxiways and hangars.

The Bucher FS 10 Flugzeugschlepper 78 is an aircraft tow vehicle built for the Swiss Air Force by the military vehicle division of Bucher-Guyer AG. Following a restructuring of this division it was sold to Mowag which is now responsible for support.

The Hugo Wolf F/A-18C simulator is a realistic non-flying replica of a McDonnell Douglas F/A-18 Hornet, used as an interactive training simulator for operational ground staff. It is fitted with specialised equipment to simulate various emergency scenarios. Two examples are used by the Swiss Air Force.