Last updated March 13, 2020
Battle of the War of the First Coalition

The first Battle of Verdun was fought on 29 August 1792 between French Revolutionary forces and a Prussian army during the opening months of the War of the First Coalition. The Prussians were victorious, gaining a clear westward path to Paris. [1] 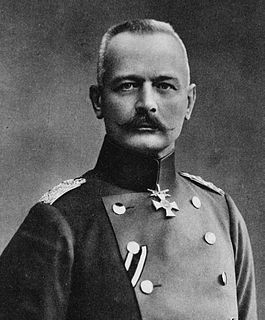 General Erich Georg Sebastian Anton von Falkenhayn was the second Chief of the German General Staff of the First World War from September 1914 until 29 August 1916. He was removed on 29 August 1916 after the failure at the Battle of Verdun, the opening of the Battle of the Somme, the Brusilov Offensive and the entry of Romania into the war on the Allied side undid his strategy to end the war before 1917. He was later given important field commands in Romania and Syria. His reputation as a war leader was attacked in Germany during and after the war, especially by the faction which supported Paul von Hindenburg. Falkenhayn held that Germany could not win the war by a decisive battle but would have to reach a compromise peace; his enemies said he lacked the resolve necessary to win a decisive victory. Falkenhayn's relations with the Chancellor Theobald von Bethmann-Hollweg were troubled and undercut Falkenhayn's plans. 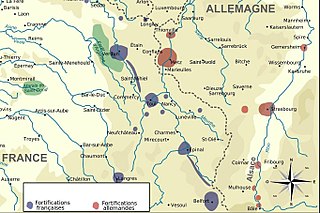 The fortifications of Metz, a city in northeastern France, are extensive, due to the city's strategic position near the border of France and Germany. After the Franco-Prussian War of 1870, the area was annexed by the newly created German Empire in 1871 by the Treaty of Frankfurt and became a Reichsland. The German Army decided to build a fortress line from Mulhouse to Luxembourg to protect their new territories. The centerpiece of this line was the Moselstellung between Metz and Thionville, in Lorraine.

The Battle of St. Quentin was a battle of the Franco-Prussian War in which Prussian forces defeated French attempts to relieve the besieged city of Paris. 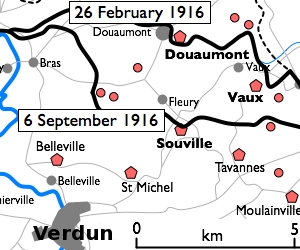 Fort Douaumont was the largest and highest fort on the ring of 19 large defensive works which had protected the city of Verdun, France since the 1890s. By 1915, the French General Staff had concluded that even the best-protected forts of Verdun could not resist bombardments from the German 420 mm Gamma guns. These new super-heavy howitzers had easily taken several large Belgian forts out of action in August 1914. Fort Douaumont and other Verdun forts were judged ineffective and had been partly disarmed and left virtually undefended since 1915. On 25 February 1916, Fort Douaumont was entered and occupied without a fight by a small German raiding party comprising only 19 officers and 79 men. The easy fall of Fort Douaumont, only three days after the beginning of the Battle of Verdun, shocked the French Army. It set the stage for the rest of a battle which lasted nine months, at enormous human cost. Douaumont was finally recaptured by three infantry divisions of the Second Army, during the First Offensive Battle of Verdun on 24 October 1916. This event brought closure to the battle in 1916.

The Battle of Szczekociny was fought on 6 June 1794 near the town of Szczekociny, Lesser Poland, between Poland and the combined forces of the Russian Empire and Kingdom of Prussia. Polish forces were led by Tadeusz Kościuszko, and the Russians and Prussians by Alexander Tormasov, future eminent general of the Napoleonic Wars. Tormasov was aided by Prussian General Francis Favrat, who emphasized the use of artillery, which put Russian-Prussian forces in the advantage.

Verdun is a small town in the Adelaide Hills, Australia, on the road from Hahndorf to Balhannah. At the 2011 Australian Census the town recorded a population of 662. 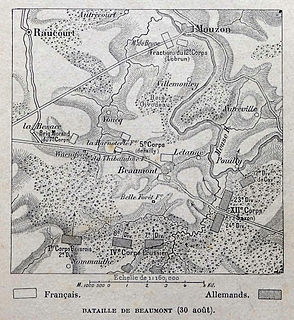 The Battle of Beaumont on 30 August 1870 was won by Prussia during the Franco-Prussian War.

The Battle of Noisseville on 31 August 1870 was fought during the Franco-Prussian War and ended in a Prussian victory.

The 4th Division was a unit of the Prussian/German Army. It was formed in Torgau on September 5, 1818. The headquarters moved to Stargard in 1820, where it stayed until 1852. In 1852, the headquarters moved to its final destination, Bromberg. From the corps' formation in 1820, the division was subordinated in peacetime to the II Army Corps. The 4th Division was disbanded in 1919 during the demobilization of the German Army after World War I.

The 56th Infantry Division was a division of the Imperial German Army. It was formed during World War I and dissolved with the demobilization of the German Army in 1919.

The 25th Division, officially the Grand Ducal Hessian (25th) Division, was a unit of the Prussian/German Army. It was headquartered in Darmstadt, the capital of the Grand Duchy of Hesse. The division was subordinated in peacetime to XVIII Army Corps when that corps was formed in 1899. The division was disbanded in 1919, during the demobilization of the German Army after World War I.

The Second Battle of Wissembourg from 26 December 1793 to 29 December 1793 saw an army of the First French Republic under General Lazare Hoche fight a series of clashes against an army of Austrians, Prussians, Bavarians, and Hessians led by General Dagobert Sigmund von Wurmser. There were significant actions at Wœrth on 22 December and Geisberg on 26 and 27 December. In the end, the French forced their opponents to withdraw to the east bank of the Rhine River. The action occurred during the War of the First Coalition phase of the French Revolutionary Wars.

This article is about the French Army in World War I. During World War I, France was one of the Triple Entente powers allied against the Central Powers. Although fighting occurred worldwide, the bulk of the fighting in Europe occurred in Belgium, Luxembourg, France and Alsace-Lorraine along what came to be known as the Western Front, which consisted mainly of trench warfare. Specific operational, tactical, and strategic decisions by the high command on both sides of the conflict led to shifts in organizational capacity, as the French Army tried to respond to day-to-day fighting and long-term strategic and operational agendas. In particular, many problems caused the French high command to re-evaluate standard procedures, revise its command structures, re-equip the army, and to develop different tactical approaches.

Meuse is a department in northeast France, named after the River Meuse. Meuse is part of the current region of Grand Est and is surrounded by the French departments of Ardennes, Marne, Haute-Marne, Vosges, Meurthe-et-Moselle, and has a short border with Belgium on the north. Parts of Meuse belong to Parc naturel régional de Lorraine. Front lines in trench warfare during World War I ran varying courses through the department and it hosted an important battle/offensive in 1916 in and around Verdun.

The Siege of Metz was a siege of the French city of Metz during the War of the Sixth Coalition at the end of the Napoleonic Wars. It pitted French forces under General Pierre François Joseph Durutte against Prussian, Russian and Hessian troops commanded by the Russian General Dimitri Mikhailovich Youzefovitch. The allied force began the siege on 17 January 1814 and eventually lifted it on 10 April the same year, without having taken the city. 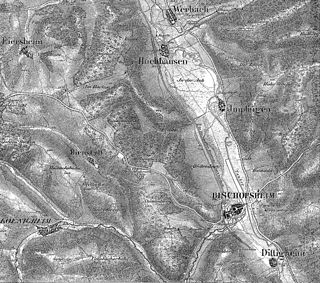 The Battle of Tauberbischofsheim was an engagement of the Austro-Prussian War of 1866, on the 24 July at Tauberbischofsheim in the Grand Duchy of Baden between troops of the German Confederation and the Kingdom of Prussia. It was part of the campaign of the Main and ended with a Prussian victory.

The heights of Le Mort Homme or Dead Man's Hill lie within the French municipality of Cumières-le-Mort-Homme around 10 km (6 mi) north-west of the city of Verdun in France. The hill became known during the Battle of Verdun during the First World War as the site of much fighting.