The hitching tie is a simple knot used to tie off stuff sacks that allows quick access as it unties quickly. To untie the knot, just pull hard on the free end of the rope and the knot will fall open. This is simply a noose or slip knot, with the loop tightened around an object. This is not a very strong knot for climbing or other extreme activities.

A stuff sack is a type of drawstring bag, usually used for storing camping items. Stuff sacks are commonly used for the storage of sleeping bags, which are otherwise bulky and difficult to manage. Stuff sacks may also be used as general containers to collect many small items together. 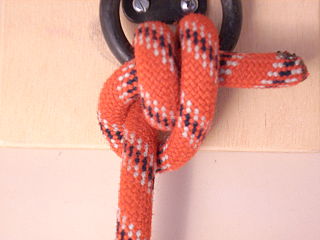 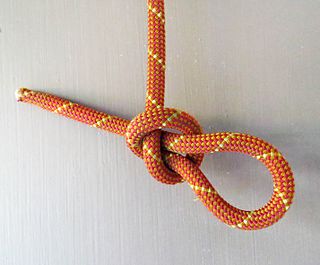 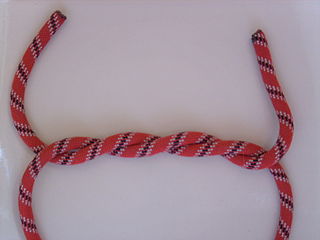 The double overhand knot is simply a logical extension of the regular overhand knot, made with one additional pass. The result is slightly larger and more difficult to untie. It forms the first part of the surgeon's knot and both sides of a double fisherman's knot. The strangle knot is a rearranged double overhand knot made around an object. It is sometimes used to secure items to posts. According to The Ashley Book of Knots, "A double overhand knot tied in a cat-o'-nine-tails is termed a blood knot."

Friendship knot loop is a knot to tie a secure and stable loop at the end of a rope.