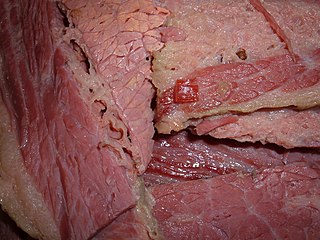 Corned beef is a salt-cured beef product. The term comes from the treatment of the meat with large-grained rock salt, also called "corns" of salt. It is featured as an ingredient in many cuisines.

The lobster buoy hitch is similar to the buntline hitch, but made with a cow hitch around the standing part rather than a clove hitch.