Friendship knot loop is a knot to tie a secure and stable loop at the end of a rope.

The slipped version where the last move is done with a bight of the end, rather than with the end itself, is one that can be tightened flat, slid, locked (like a belt buckle), and then untied quickly (like when nature calls) with an exploding pop. If not tightened flat, this Slipped friendship knot loop collapses into a cube and will neither slide nor pop. [1]

Like tying a friendship knot, except that it is tied to the ropes own end, coming back from forming the loop. 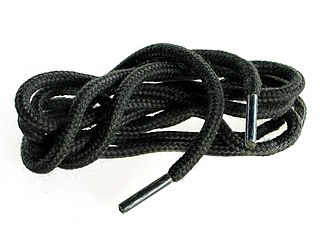 Shoelaces, also called shoestrings or bootlaces, are a system commonly used to secure shoes, boots, and other footwear. They typically consist of a pair of strings or cords, one for each shoe, finished off at both ends with stiff sections, known as aglets. Each shoelace typically passes through a series of holes, eyelets, loops or hooks on either side of the shoe. Loosening the lacing allows the shoe to open wide enough for the foot to be inserted or removed. Tightening the lacing and tying off the ends secures the foot firmly within the shoe.You can tie the laces in different shapes, most commonly a simple bow.

The hitching tie is a simple knot used to tie off stuff sacks that allows quick access as it unties quickly. To untie the knot, just pull hard on the free end of the rope and the knot will fall open. This is simply a noose or slip knot, with the loop tightened around an object. This is not a very strong knot for climbing or other extreme activities.