Rope splicing in ropework is the forming of a semi-permanent joint between two ropes or two parts of the same rope by partly untwisting and then interweaving their strands. Splices can be used to form a stopper at the end of a line, to form a loop or an eye in a rope, or for joining two ropes together. [1] Splices are preferred to knotted rope, since while a knot typically reduces the strength by 20–40%, [2] a splice is capable of attaining a rope's full strength. [3] However, splicing usually results in a thickening of the line and, if subsequently removed, leaves a distortion of the rope. Most types of splices are used on 3-strand rope, but some can be done on 12-strand or greater single-braided rope, as well as most double braids. While a spliced 3-strand rope's strands are interwoven to create the splice, a braided rope's splice is constructed by simply pulling the rope into its jacket.

Splices are often tapered to make the thicker splice blend into the rest of the line. There are two main types of tapering, the standard and the "West Coast Taper".

A fid is a hand tool made from wood, plastic, or bone and is used in the process of working with rope. A variety of fid diameters are available depending on the size of rope being used. Styles of fid designs include: [10]

A Marlinspike is a tool, usually made of steel and often part of a sailor's pocketknife, which is used to separate strands of rope from one another. They can range in size anywhere from 3 inches to 5 feet long, with a round or flattened point. [11]

A pulling fid is often used for smaller diameters of braided ropes. Also a Softfid is a great tool when dealing with tightly braided ropes.

Kernmantle rope is rope constructed with its interior core protected by a woven exterior sheath designed to optimize strength, durability, and flexibility. The core fibers provide the tensile strength of the rope, while the sheath protects the core from abrasion during use. 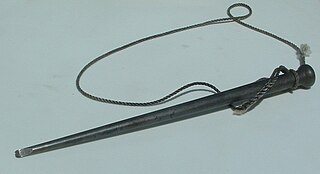 A marlinspike is a tool used in marine ropework. Shaped in the form of a polished metal cone tapered to a rounded or flattened point, it is used in such tasks as unlaying rope for splicing, untying knots, drawing marline tight using a marlinspike hitch, and as a toggle joining ropes under tension in a belaying pin splice. 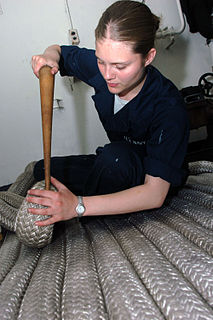 A fid is a conical tool traditionally made of wood or bone. It is used to work with rope and canvas in marlinespike seamanship. A fid differs from a marlinspike in material and purposes. A marlinspike is used in working with wire rope, natural and synthetic lines, may be used to open shackles, and is made of metal. A fid is used to hold open knots and holes in canvas, and to separate the "lays" of synthetic or natural rope for splicing. A variation of the fid, the gripfid, is used for ply-split braiding. The gripfid has a jamming cleat to pull a cord back through the cord split by the fid's point.