The knotless is usually tied to a leader, rather than directly to the main line. The far end of the leader may already be baited or looped in preparation for bait, because the knot will be tied using the near end as the working end. The working end is passed through the hook eye from back to front (towards the hook point), wrapped tightly around itself and the hook shaft several times (down from the eye towards the bend of the hook), and finally passed once more through the eye back to front. 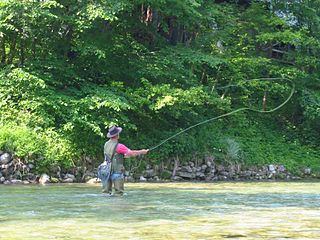 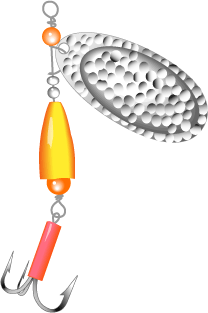 The hair rig is a fishing method which allows a bait to be presented without sitting directly on the hook. It is mainly associated with boilies, but also works effectively with many other baits. The hair rig became popular in the 1980s and was a joint invention by Kevin Maddocks and Len Middleton. It has been experimented with by many anglers, and has revolutionised carp fishing.

A trotline is a heavy fishing line with baited hooks attached at intervals by means of branch lines called snoods. A snood is a short length of line which is attached to the main line using a clip or swivel, with the hook at the other end. A trotline can be set so it covers the width of a channel, river, or stream with baited hooks and can be left unattended. There are many ways to set a trotline, with most methods involving weights to hold the cord below the surface of the water. They are used for catching crabs or fish. Trotlines should be used with caution as they are illegal in many locations.

Mormyshka is a sort of fishing lure or a jig. The word is derived from Russian word Mormysh meaning Freshwater Shrimp (Gammarus). 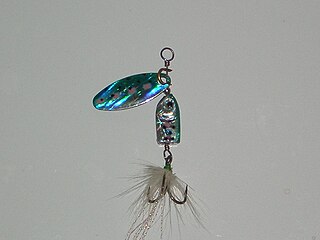 A spinnerbait is any of a family of fishing lures that get their name from one or more metal blades shaped so as to spin like a propeller when the lure is in motion, creating varying degrees of flash and vibration that mimic small fish or other prey. The two most popular types of spinnerbaits are the "in-line spinner" and "safety pin" spinnerbaits, though others such as the "tail-spinner" also exist. Spinnerbaits are used principally for catching predatory fish such as perch, pike and bass. 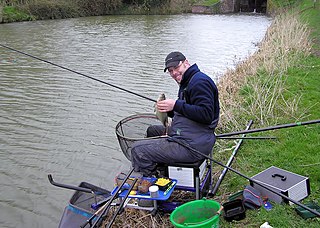 The snell knot is a hitch knot used to attach an eyed fishing hook to fishing line. Hooks tied with a snell knot provide an even, straight-line pull to the fish. It passes through the eye of the hook, but primarily attaches to the shaft. It is a very secure knot, but because it is easily tied using only the near end as the working end, it is used to attach a hook only to a leader, rather than directly to the main line.

Kite fishing, a fishing technique, involves a kite from which hangs a drop line attached to a lure or bait. The kite is flown out over the surface of a body of water, and the bait floats near the waterline until taken by a fish. The kite then drops immediately, signaling to the fisherman that the bait has been taken, and the fish is then hauled in. Kites can provide boatless fishermen access to waters that would otherwise be available only to boats. Similarly, for boat owners, kites provide a way to fish in areas where it is not safe to navigate - such as shallows or coral reefs, where fish may be plentiful.