Last updated February 25, 2019
This article is about a rope knot. For the mathematical version, see Stevedore knot (mathematics).

The bight is given one more half turn than in the former knot [which itself is given, "one additional half twist," more than the figure-eight knot], before the end is finally stuck.
—  The Ashley Book of Knots [1]

There is a lack of consensus among knot experts regarding the origin of the name. Many sources, including The Ashley Book of Knots , suggest the knot was used by stevedores in their work loading and unloading ships. To raise and lower cargo they used large blocks and these required a larger stopper knot to prevent the line from running completely through the block. [1] 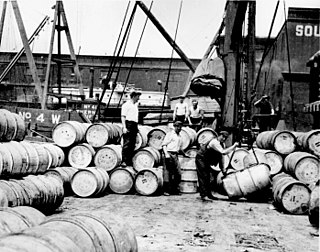 A stevedore, longshoreman, docker or dockworker is a waterfront manual laborer who is involved in loading and unloading ships, trucks, trains or airplanes.

A ship is a large watercraft that travels the world's oceans and other sufficiently deep waterways, carrying passengers or goods, or in support of specialized missions, such as defense, research and fishing. Historically, a "ship" was a sailing vessel with at least three square-rigged masts and a full bowsprit. Ships are generally distinguished from boats, based on size, shape, load capacity, and tradition.

However, in The Art of Knotting & Splicing, Cyrus Day disagrees, stating "the name originated in a pamphlet issued about 1890 by the C.W. Hunt Company, which sold rope under the name 'Stevedore'. It was subsequently adopted by dictionaries, engineers' handbooks, and other works of reference, and it is now firmly established in books, if not in the vocabulary of seamen." [2] 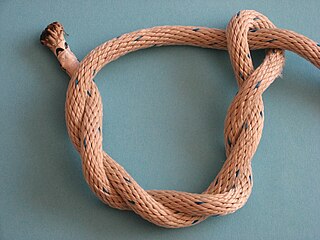