The shroud knot is a multi-strand bend knot used to join two ends of laid (or twisted) rope together. Shroud knots, in general, are a class of knots in which the individual strands of laid rope are knotted, but not woven, to the individual strands of another laid rope. This makes them more secure than a simple bend but less secure than a full splice.

Shroud knots were originally used as a quick way of repairing a rope that had broken aboard a ship. As modern ships now use steel cable for the most part, the knots are now more often used decoratively than functionally. 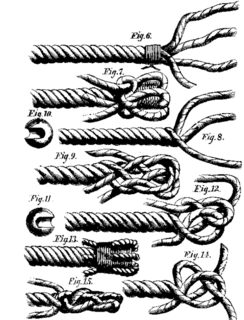 To worm, parcel and serve a line is to apply a multi-layered protection against chafe and deterioration to standing rigging. It is a technique not usually used on modern small boats, but is found extensively on traditionally-rigged sailing ships. Worming, parcelling and serving —referred to collectively as "service"— is traditionally applied only to traditional twisted rope, either natural fiber or steel wire-rope, not the braided line almost exclusively used on modern vessels, but some traditional vessels now use modern high modulus braided lines in place of wire rope and serve the line to maintain the traditional appearance. It can be applied to the entire length of a line, such as a shroud, or selectively, to specific parts of a line, such as over the spliced ends of a stay, where the chafe on the middle section of the stay precludes complete protection.