The racking bend is a knot for joining two ropes of different diameter. "Racking" refers to the figure eight weaving that binds the bight of the larger rope together.

It serves a somewhat similar purpose as a Sheet bend, a Double sheet bend or a Heaving line bend, and may be used to throw a thick line over with the help of a thinner line at the end of which there may be a weight such as a Monkey fist or a Heaving line knot.

The heaving line bend is a knot dubiously presented as supposedly bending a smaller line to a larger line to be brought across some span. This particular knot gained its name and was put forwards to assume this role after a mistake in illustration. Hjalmar Ohrvall found the knot in a museum on a Japanese shamisen ; in his 1916, enlarged edition of Om Knutar, his daughter mis-drew the knot with a crossing at the top of the hitched-to bight of the larger material. Presumably, Ashley et al. saw only the mistaken image and assumed the function of the knot. Whether it has ever seen actual nautical use is unconfirmed — the knot is of a rather insecure/instable nature for pulling a line through heavy seas. It is knot number 1463 in The Ashley Book of Knots, and appeared in the 1916 Swedish knot manual Om Knutar. 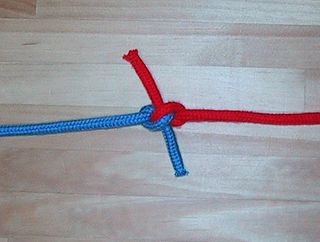 In sailing, heaving to is a way of slowing a sailboat's forward progress, as well as fixing the helm and sail positions so that the boat does not have to be steered. It is commonly used for a "break"; this may be to wait for the tide before proceeding, or to wait out a strong or contrary wind. For a solo or shorthanded sailor it can provide time to go below deck, to attend to issues elsewhere on the boat or to take a meal break. It is also used as a storm tactic.