Michael Robert Kremer (born November 12, 1964) [3] is an American development economist who is University Professor in Economics And Public Policy at the University of Chicago. [4] He is the founding director of the Development Innovation Lab at the Becker Friedman Institute for Economics. [5] Kremer served as the Gates Professor of Developing Societies at Harvard University until 2020. [4] In 2019, he was jointly awarded the Nobel Memorial Prize in Economics, together with Esther Duflo and Abhijit Banerjee, [6] "for their experimental approach to alleviating global poverty." [7]

Michael Robert Kremer was born in 1964 to Eugene and Sara Lillian (née Kimmel) Kremer in New York City. His father, Eugene Kremer was the son of Jewish immigrants to the US from Austria-Poland. His mother, Sara Lillian Kremer was a professor of English literature, who specialized in American Jewish and Holocaust literature. Her parents were Jewish immigrants to the US from Poland. [8] He graduated from Harvard University (A.B. in Social Studies in 1985 and Ph.D. in Economics in 1992). [4] [9]

Kremer has focused his research on poverty reduction, often as it relates to education economics and health economics. [10] Working with Abhijit Banerjee and Esther Duflo (with whom he shared the 2019 Nobel Memorial Prize in Economics), he helped establish the effectiveness of randomized controlled trials to test proposed antipoverty measures. [11] Describing Kremer’s early use of pioneering experimental methods, Duflo said that Kremer “was there from the very beginning, and took enormous risks . . . . He is a visionary.” [12]

Kremer is a Fellow of the American Academy of Arts and Sciences, [13] a recipient of a MacArthur Fellowship (1997) [14] and a Presidential Faculty Fellowship, and was named a Young Global Leader by the World Economic Forum. [15] He is a research affiliate at Innovations for Poverty Action(IPA), [16] a New Haven, Connecticut-based research outfit dedicated to creating and evaluating solutions to social and international development problems. Kremer is a member of Giving What We Can, an effective altruism organization whose members pledge to give 10% of their income to effective charities. [17] He is founder and president of WorldTeach, a Harvard-based organization which places college students and recent graduates as volunteer teachers on summer and year-long programs in developing countries around the world. He is also co-founder of Precision Agriculture for Development (PAD), a non-profit organization that leverages the global emergence of the mobile phone to provide digital agronomic advisory services to smallholder farmers at scale. [18]

Kremer started the advanced market commitment, which focuses on creating incentive mechanisms to encourage the development of vaccines for use in developing countries, and the use of randomized trials to evaluate interventions in the social sciences. He created the well-known economic theory regarding skill complementarities called Kremer's O-Ring Theory of Economic Development. [19] In 2000, Kremer, along with Charles Morcom, published a study recommending that governments fight elephant poaching by stockpiling ivory and so that they can proactively flood the market if elephant populations decline too severely. [20]

In his widely cited paper "Population Growth and Technological Change: One Million B.C. to 1990", Kremer studied economic change over the last one million years. [21] He found that economic growth increased with population growth.

Kremer led a panel on the reformation of education systems at the International Growth Centre's Growth Week 2010. [22] In early 2021, he was appointed by the G20 to the High Level Independent Panel (HLIP) on financing the global commons for pandemic preparedness and response, co-chaired by Ngozi Okonjo-Iweala, Tharman Shanmugaratnam and Lawrence Summers. [23]

Kremer is the husband of economist Rachel Glennerster.

George Jesus Borjas is an American economist and the Robert W. Scrivner Professor of Economics and Social Policy at the Harvard Kennedy School. He has been described as "America’s leading immigration economist" and "the leading sceptic of immigration among economists". Borjas has published a number of studies that conclude that low-skilled immigration adversely affects low-skilled natives, a proposition that is debated among economists. 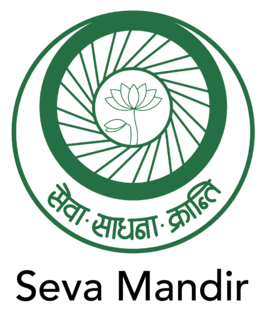 Seva Mandir is a grassroots NGO based in Udaipur, in the Rajasthan state of India. Founded by Dr. Mohan Sinha Mehta in 1968. The organisation turned 50 in 2018. Seva Mandir works mainly in natural resource development and sustainability, village development, women empowerment, education and health care, continuing education, and children's welfare.

The Abdul Latif Jameel Poverty Action Lab (J-PAL) is a global research center working to reduce poverty by ensuring that policy is informed by scientific evidence. J-PAL conducts randomized impact evaluations to answer critical questions in the fight against poverty, and builds partnerships with governments, NGOs, donors, and others to generate new research, share knowledge, and scale up effective programs. 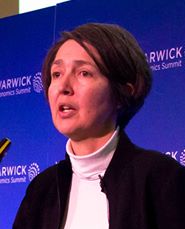 Rachel Glennerster is the chief economist at the Department for International Development (DFID), the UK's ministry for international development cooperation, after formerly serving on DFID's Independent Advisory Committee on Development Impact. She is on leave as an affiliated researcher of the Abdul Latif Jameel Poverty Action Lab (J-PAL). She was the executive director of J-PAL until 2017 and the lead academic for Sierra Leone at the International Growth Centre, a research centre based jointly at The London School of Economics and Political Science and the University of Oxford. She helped establish the Deworm the World Initiative, a program that targets increased access to education and improved health from the elimination of intestinal worms for at-risk children and has helped "deworm" millions of children worldwide. 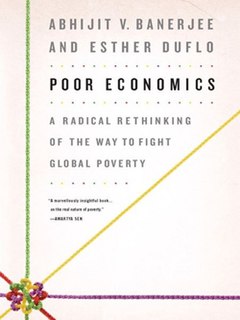 Poor Economics: A Radical Rethinking of the Way to Fight Global Poverty (2011) is a non-fiction book by Abhijit V. Banerjee and Esther Duflo, both professors of Economics at Massachusetts Institute of Technology (MIT). The book reports on the effectiveness of solutions to global poverty using an evidence-based randomized control trial approach. It won the 2011 Financial Times and Goldman Sachs Business Book of the Year Award.

Edward "Ted" Andrew Miguel is the Oxfam Professor of Environmental and Resource Economics in the Department of Economics at University of California, Berkeley, USA. He is the founder and faculty director of the Center for Effective Global Action (CEGA) at U.C. Berkeley.

The Elusive Quest For Growth: Economists’ Adventures and Misadventures in the Tropics is a 2001 book by World Bank development economist William Easterly. Upon its release, the book received acclaim from such figures as Bruce Bartlett, Robert Solow, and Paul Romer, and has since become widely cited in the Economic Development literature.

Pascaline Dupas is a French economist whose research focuses on development economics and applied microeconomics, with a particular interest in health, education, and savings. She is a professor in economics at Stanford University, holds senior fellowships at the Stanford Institute for Economic Policy Research and the Freeman Spogli Institute for International Studies and is a co-chair of the Poverty Action Lab's health sector. She received the Best Young French Economist Prize in 2015.

Nancy Qian is a Chinese American economist and currently serves as the James J. O'Connor Professor in the Kellogg School of Management Managerial Economics and Decision Sciences and a Professor by Courtesy at the Department of Economics at Northwestern University. Her research interests include development economics, political economy and economic history. She is a leading development economist and an expert of the Chinese economy.

Rema Hanna is an economist and is the Jeffrey Cheah Professor of South East Asia Studies at Harvard University's Kennedy School of Government. Moreover, she currently serves as Co-Director of the Evidence for Policy Design (EPoD) research programme at Harvard's Center for International Development and a Scientific Co-Director for Southeast Asia at the Abdul Latif Jameel Poverty Action Lab (J-PAL). Her research focuses on the efficiency and effectiveness of public services in developing countries.

Good Economics for Hard Times: Better Answers to Our Biggest Problems (2019) is a non-fiction book by Abhijit V. Banerjee and Esther Duflo, both professors of Economics at MIT. It was published on November 12, 2019 by PublicAffairs (US), Juggernaut Books (India) and Allen Lane (UK). The book draws from recent developments in economics research to argue solutions to the issues facing modern economies and societies around the world, including slowing economic growth, immigration, income inequality, climate change, globalization and technological unemployment. It is their second collaborative book since the publication of their book Poor Economics: A Radical Rethinking of the Way to Fight Global Poverty (2011) and their first since becoming a married couple in 2015. The book's publication comes a month after Banerjee and Duflo were jointly awarded the Nobel Prize in Economics, shared with Harvard University professor Michael Kremer.

Jeanne Lafortune is a Canadian economist who currently works as an Associate Professor in Economics and Director of Research at the Pontifical Catholic University of Chile. She is also a researcher at the Abdul Latif Jameel Poverty Action Lab, which is a global research center that aims to reduce poverty and improve life quality of people in the Caribbean and Latin America. Lafortune holds a Ph.D. in Economics from the Massachusetts Institute of Technology (MIT), Cambridge, Massachusetts. Her research interests focus on three main fields, including economic history, family and development economics.

Petia Topalova is the Deputy Chief in the Emerging Economies Unit of the European Department of the International Monetary Fund and Mission Chief for the Slovak Republic. She is also a research economist with publications in development and trade economics.