Operatic pop or popera is a subgenre of pop music that is performed in an operatic singing style or a song, theme or motif from classical music stylized as pop. According to music historians, operatic pop songs became most prevalent with the rise of Tin Pan Alley musicians during the early 1900s. [1] One influence was the large influx of Italian immigrants to the United States who popularized singers such as Enrico Caruso and inspired the creation of "novelty songs" using Italian dialect. The songs often used operatic repertory "to make a satirical or topical point". [1] Popularized by American Vaudeville, musical comedies, jazz and operettas, examples include Irving Berlin's That Opera Rag, Billy Murray's My Cousin Caruso and Louis Armstrong's riffs on Rigoletto and Pagliacci . [1] The subgenre subsequently dwindled after the 1920s but revived during the rock music era with albums such as The Who's Tommy and Queen's A Night at The Opera . [1]

In 1986, operatic tenor Luciano Pavarotti had a hit with the Lucio Dalla song "Caruso", which helped to spark a recent flourishing of operatic pop. [2] Other singers, including Andrea Bocelli, Josh Groban, and Katherine Jenkins, also recorded the number. [2] Bocelli, in particular, soon became a leading representative of the subgenre. [2] [3] In the 2000s, singers and singing groups devoted primarily to operatic pop built on this renewed success. Groups like Il Divo and Amici Forever have achieved popularity with the mix of "contemporary pop with operatic style" characteristic of operatic pop. [4] The subgenre is often performed by classical crossover singers and acts, although that field is much broader in the types of music it encompasses. "Popera" performances, such as those by the Three Tenors, have reached larger audiences and brought in greater profits than typical for operatic music. [5]

Luciano Pavarotti was an Italian operatic tenor who also crossed over into popular music, eventually becoming one of the most commercially successful tenors of all time. He made numerous recordings of complete operas and individual arias, gaining worldwide fame for the quality of his tone, and eventually established himself as one of the finest tenors of the 20th century, achieving the honorific title "King of the High Cs".

Andrea Angel Bocelli is an Italian singer, songwriter, and record producer. He was diagnosed with congenital glaucoma at 5 months old, and became completely blind at age 12, following a football accident. After performing evenings in piano bars and competing in local singing contests, Bocelli signed his first recording contract with the Sugar Music label. He rose to fame in 1994, winning the preliminary round of the 44th Sanremo Music Festival performing "Miserere", with the highest marks ever recorded in the newcomers section.

The Three Tenors were a popular operatic singing group during the 1990s and early 2000s, consisting of Spaniards Plácido Domingo and José Carreras, and Italian Luciano Pavarotti. The trio began their collaboration with a performance at the ancient Baths of Caracalla in Rome, Italy on 7 July 1990, the eve of the 1990 FIFA World Cup Final. The image of three tenors in formal evening dress singing in a World Cup concert captivated the global audience. The recording of this debut concert became the best-selling classical album of all time and led to additional performances and live albums. They performed to a global television audience at three further World Cup Finals, 1994 in Los Angeles, 1998 in Paris, and 2002 in Yokohama. They also toured other cities around the world, usually performing in stadiums or similar large arenas to huge audiences. They last performed together at an arena in Columbus, Ohio, on 28 September 2003.

Il Divo is a multi-national classical crossover vocal group. The male quartet originated in the United Kingdom in December 2003, bringing together singers Urs Bühler (Switzerland), Carlos Marín (Spain), David Miller (USA), and Sébastien Izambard (France). The group was created and promoted by music producer Simon Cowell for the label Syco Music. Although it is unclear how the group's name came about, "Il Divo" is translated from Italian as "divine performer." 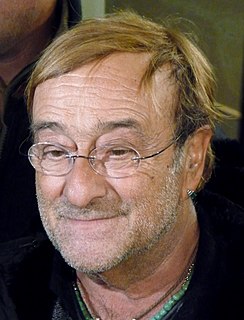 Lucio Dalla was an Italian singer-songwriter, musician and actor. He also played clarinet and keyboards.

Albano Antonio Carrisi, better known as Al Bano, is an Italian recording artist, actor, and winemaker. In 2016, he was awarded Albanian citizenship due to his close ties with the country.

Canzone napoletana, sometimes referred to as Neapolitan song, is a generic term for a traditional form of music sung in the Neapolitan language, ordinarily for the male voice singing solo, although well represented by female soloists as well, and expressed in familiar genres such as the love song and serenade. Many of the songs are about the nostalgic longing for Naples as it once was. The genre consists of a large body of composed popular music—such songs as "'O sole mio"; "Torna a Surriento"; "Funiculì, Funiculà"; "Santa Lucia" and others. 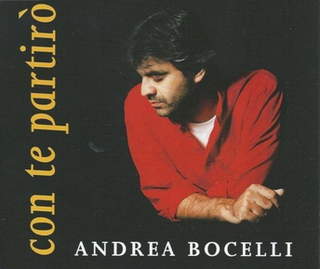 "Con te partirò" is an Italian song written by Francesco Sartori (music) and Lucio Quarantotto (lyrics). It was first performed by Andrea Bocelli at the 1995 Sanremo Music Festival and recorded on his album of the same year, Bocelli. The single was first released as an A-side single with "Vivere" in 1995, topping the charts, first in France, where it became one of the best-selling singles of all-time, and then in Belgium, breaking the all-time record sales there.

Il mare calmo della sera is the debut album by Italian tenor singer Andrea Bocelli, following his win of the Sanremo Festival in 1994, singing his first single and the leading single of the album of the same name. It was certified Gold in the Netherlands.

Alfio is an Australian-Italian tenor, songwriter, musician, and composer. He began singing at a very early age and started singing professionally at the age of 17, concentrating on recorded music and concerts so far. Alfio has performed in Australia, the United States, Europe, and Asia.

Il Volo is an Italian operatic pop trio, consisting of baritone Gianluca Ginoble, and tenors, Piero Barone and Ignazio Boschetto. They describe their music as "popera". Having won the Sanremo Music Festival 2015, they represented Italy in the Eurovision Song Contest 2015 in Vienna, Austria. They reached third place, but managed to secure a solid first-place victory in the televoting.

Pasquale Esposito is an Italian-born American tenor. He has released eight albums and has toured internationally.

Pavarotti & Friends was a series of benefit concerts hosted by Italian operatic tenor Luciano Pavarotti between 1992 and 2003 in his home town of Modena, Italy. Proceeds from the events were donated to humanitarian causes including the international aid agency War Child and the United Nations High Commissioner for Refugees. The concerts featured Pavarotti performing with special musical guests and each concert was released as a compilation album and DVD under London Records/Decca Records.