The Thomas Select School is a historic log building in rural Butler County, Ohio, United States. Constructed in 1810, the building has seen numerous uses, ranging from church to school to house. It has been named a historic site.

Numerous log schoolhouses were built throughout early Ohio, but few have survived; the Thomas Select School is important partly because of its very existence. [2] Built in 1810, [1] the school was associated with a Welsh immigrant church in the small community of Shandon. In its early years, the Whitewater Congregational Church worshipped in both English and Welsh and supported two ministers; one of them, Thomas Thomas, also taught school in order to earn a living. Using their home as the schoolhouse, Thomas and his wife taught both girls and boys. [2] As the house was a parsonage, it remained in the church's ownership until 1885, when the trustees sold it to a family named Robinson, which owned the building until selling it in 1947. Since that time, it has been used as a summer house. [3]

Two stories tall, the school is a log cabin measuring 30 by 22 feet (9.1 m × 6.7 m), which makes it larger than most log schoolhouses of the period. [2] Since its early days, the building has been given an asphalt roof and various elements of stone. [4] Among its distinctive components is the presence of "steeple notches" in the logs: [2] these are V-shaped cuts made in the logs to enable them to fit together. Notches in log cabins are typically of other shapes, making the steeple notch rare and dateable; most log buildings in the eastern United States with this kind of notch were built before 1800. [5]

A log cabin is a small log house, especially a less finished or less architecturally sophisticated structure. Log cabins have an ancient history in Europe, and in America are often associated with first generation home building by settlers. 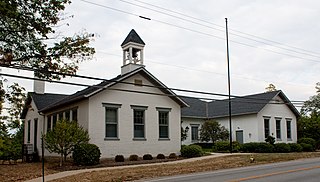 The Jefferson Schoolhouse is a historic one-room school in the Village of Indian Hill, Ohio, United States. Built along Drake Road in 1851, it is Indian Hill's oldest extant school. Three early schools, known as the Franklin, Jefferson, and Washington Schools, were established within the bounds of the modern community, but only the Jefferson School remains to the present day.

The Miller–Leuser Log House is a historic eighteenth-century log cabin near the city of Cincinnati in Hamilton County, Ohio, United States. One of the oldest houses in the area, it has been named a historic site. 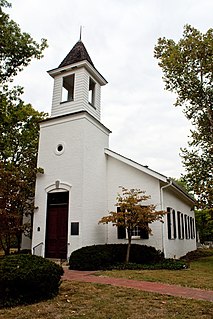 Armstrong Chapel United Methodist Church is a historic church in the city of Indian Hill, Ohio, United States. Built in 1831, it is a small rectangular building with a prominent front tower. It was designated a historic site in 1975.

John Vaughan House is a historic house near Shandon, Ohio.

The Insco Apartments is a historic apartment building in downtown Dayton, Ohio, United States. It was designed by Charles Insco Williams, a native of Dayton, and constructed in 1894. Williams designed the structure after an apartment hotel that he had seen on Fifth Avenue in New York City; he did not copy the design slavishly, but many of the architectural themes present in the Insco Apartments were derived ultimately from the unspecified New York City apartment building.

The Vardy Community School was a Presbyterian mission school established in the Vardy community of Hancock County, Tennessee, United States, in the late-19th and early-20th centuries. At the time of its founding, the school was the only institution providing primary education to children of the multi-racial Melungeon communities, who lived in the remote mountainous areas along the Tennessee-Virginia border.

St. John the Baptist Catholic Church is a historic Roman Catholic church in Marion Township, Mercer County, Ohio, United States. Located in the unincorporated community of Maria Stein, it is the home of an active congregation and has been recognized as a historic site because of its well-preserved late nineteenth-century Romanesque Revival architecture.

St. Michael's Catholic Church is a historic Catholic church in Mechanicsburg, a village in Champaign County, Ohio, United States. Completed in the 1880s, it served a group of Catholics who had already been meeting together for nearly thirty years. One of several historic churches in the village, it has been designated a historic site because of its well-preserved nineteenth-century architecture.

Immaculate Conception Catholic Church is a Roman Catholic parish in Botkins, Ohio, United States. Erected in 1865, the parish owns a complex of buildings constructed in a wide range of years, including two that have been designated as historic sites.

The Studabaker-Scott House and Beehive School are two historic buildings near the city of Greenville in Darke County, Ohio, United States. Located along State Route 49 south of the city, both are unusually well-preserved remnants of the architecture of the middle third of the nineteenth century. 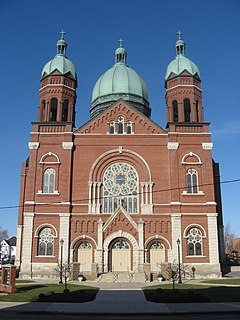 Immaculate Conception Catholic Church is a parish of the Roman Catholic Church in Celina, Ohio, United States. Founded later than many other Catholic parishes in the heavily Catholic region of western Ohio, it owns a complex of buildings constructed in the early 20th century that have been designated historic sites because of their architecture. Leading among them is its massive church, built in the Romanesque Revival style just 43 years after the first Catholic moved into the city: it has been called northwestern Ohio's grandest church building.

The York United Methodist Church is a United Methodist congregation in Medina County, Ohio, United States. Formed during the middle of the 19th century, it worships in a prominent church building that has been named a historic site. 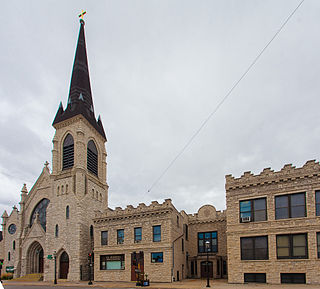 St. Joseph's Catholic Church Complex is located in Waukesha, Wisconsin. The church building itself was built in 1888. On October 28, 1983, the complex was added to the National Register of Historic Places for its architectural significance.

The Pfarr Log House is a log cabin located near the village of Milford in rural Clermont County, Ohio, United States. Built in the early nineteenth century, it provides a pivotal representation of the area's earliest built environment, and it has been named a historic site. This cabin is known primarily as a property of the Pfarr family because it was purchased by George Pfarr in late 1840 as part of a 21 acre homestead, and it remained in the Pfarr family until it was sold to James Wiederhold in 1976. George, a butcher and farmer, immigrated from Bavaria with his wife and three children, and the property was actively farmed until the 1960s by his children and grandchildren.

The Mercer Log House is a large log cabin in the city of Fairborn, Ohio, United States. Home to the city's first settlers and changed very little since their time, it is one of Ohio's best preserved log cabins from the settlement period, and it has been named a historic site.

The Twin Pines Lodge and Cabin Camp, also known as the Twin Pines Motel and Frontier Court, is a tourist camp in Dubois, Wyoming on the way to Yellowstone National Park on U.S. Route 287. The camp was established in 1929 by Dubois businessman Oliver Ernest Stringer who designed the camp and assisted in its construction. Stringer had previously been involved in the construction of the Brooks Lake Lodge, where he built furniture.

Saint Aloysius on the Ohio is a Roman Catholic parish in the Sayler Park neighborhood of Cincinnati, Ohio, United States. The parish is part of the Archdiocese of Cincinnati. It is named after St. Aloysius Gonzaga and located near the Ohio River.