Last updated October 20, 2020
Not to be confused with Native American ancestry.
People in the United States who self-identify their ancestral origin or descent as "American"
For the article on the population of the United States, see Americans.

American ancestry refers to people in the United States who self-identify their ancestral origin or descent as "American", rather than the more common officially recognized racial and ethnic groups that make up the bulk of the American people. [2] [3] [4] The majority of these respondents are visibly White Americans, who either simply use this response as a political statement or are far removed from and no longer self-identify with their original ethnic ancestral origins. [5] [6] The latter response is attributed to a multitude of generational distance from ancestral lineages, [3] [7] [8] and these tend be of English, Scotch-Irish, or other British ancestries, as demographers have observed that those ancestries tend to be seriously undercounted in U.S. Census Bureau American Community Survey ancestry self-reporting estimates. [9] [10] Although U.S. Census data indicates "American ancestry" is commonly self-reported in the Deep South and Upland South, [11] [12] the vast majority of Americans and expatriates do not equate their nationality with ancestry, race or ethnicity, but with citizenship and allegiance. [13] [8]

The earliest attested use of the term "American" to identify an ancestral or cultural identity dates to the late 1500s, with the term signifying "the indigenous peoples discovered in the Western Hemisphere by Europeans." [14] In the following century, the term "American" was extended as a reference to colonists of European descent. [14] The Oxford English Dictionary identifies this secondary meaning as "historical" and states that the term "American" today "chiefly [means] a native (birthright) or citizen of the United States." [14]

President Theodore Roosevelt asserted that an "American race" had been formed on the American frontier, one distinct from other ethnic groups, such as the Anglo-Saxons. [15] :78,131 He believed, "The conquest and settlement by the whites of the Indian lands was necessary to the greatness of the race...." [15] :78 "We are making a new race, a new type, in this country." [15] Roosevelt's "race" beliefs certainly weren't unique in the 19th and early 20th century. [16] [17] [18] Eric Kaufmann has suggested that American nativism has been explained primarily in psychological and economic terms to the neglect of a crucial cultural and ethnic dimension. Kauffman contends American nativism cannot be understood without reference to the theorem of the age that an "American" national ethnic group had taken shape prior to the large-scale immigration of the mid-19th century. [17]

Nativism gained its name from the "Native American" parties of the 1840s and 1850s. [19] [20] In this context "Native" does not mean indigenous or American Indian but rather those descended from the inhabitants of the original Thirteen Colonies (Colonial American ancestry). [21] [22] [17] These "Old Stock Americans", primarily English Protestants, saw Catholic immigrants as a threat to traditional American republican values, as they were loyal to the papacy. [23] [24]

Nativist outbursts occurred in the Northeast from the 1830s to the 1850s, primarily in response to a surge of Catholic immigration. [25] The Order of United American Mechanics was founded as a nativist fraternity, following the Philadelphia nativist riots of the preceding spring and summer, in December 1844. [26] The New York City anti-Irish, anti-German, anti-Catholic secret society the Order of the Star Spangled Banner was formed in 1848. [27] Popularised nativist movements included the Know Nothing or American Party of the 1850s and the Immigration Restriction League of the 1890s. [28] Nativism would eventually influence Congress; in 1924, legislation limiting immigration from Southern and Eastern European countries was ratified, while quantifying previous formal and informal anti-Asian previsions, such as the Chinese Exclusion Act of 1882 and the Gentlemen's Agreement of 1907. [29] [30]

Further information: Race and ethnicity in the United States Census

According to U.S. Census Bureau; "Ancestry refers to a person's ethnic origin or descent, 'roots,' or heritage, or the place of birth of the person or the person's parents or ancestors before their arrival in the United States". [31]

In the Southern United States as a whole, 11.2% reported "American" ancestry, second only to African American. American was the fourth most common ancestry reported in the Midwest (6.5%) and West (4.1%). All Southern states except for Delaware, Maryland, Florida, and Texas reported 10% or more American, but outside the South, only Missouri and Indiana did so. American was in the top five ancestries reported in all Southern states except for Delaware, in four Midwestern states bordering the South (Indiana, Kansas, Missouri, and Ohio) as well as Iowa, and six Northwestern states (Colorado, Idaho, Oregon, Utah, Washington, Wyoming), but only one Northeastern state, Maine. The pattern of areas with high levels of American is similar to that of areas with high levels of not reporting any national ancestry. [37]

In the 2014 American Community Survey, German Americans (14.4%), Irish Americans (10.4%), English Americans (7.6%) and Italian Americans (5.4%) were the four largest self-reported European ancestry groups in the United States, forming 37.8% of the total population. [38] However, English, Scotch-Irish, and British American demography is considered to be seriously undercounted, as the 6.9% of U.S. Census respondents who self-report and identify simply as "American" are primarily of these ancestries. [9] < [10]

Reynolds Farley writes that "we may now be in an era of optional ethnicity, in which no simple census question will distinguish those who identify strongly with a specific European group from those who report symbolic or imagined ethnicity." [32]

Stanley Lieberson and Mary C. Waters write: "As whites become increasingly distant in generations and time from their immigrant ancestors, the tendency to distort, or remember selectively, one's ethnic origins increases.... [E]thnic categories are social phenomena that over the long run are constantly being redefined and reformulated." [34] [39] Mary C. Waters contends that white Americans of European origin are afforded a wide range of choice: "In a sense, they are constantly given an actual choice—they can either identify themselves with their ethnic ancestry or they can 'melt' into the wider society and call themselves American." [40]

Professors Anthony Daniel Perez and Charles Hirschman write: "European national origins are still common among whites—almost 3 of 5 whites name one or more European countries in response to the ancestry question. ... However, a significant share of whites respond that they are simply "American" or leave the ancestry question blank on their census forms. Ethnicity is receding from the consciousness of many white Americans. Because national origins do not count for very much in contemporary America, many whites are content with a simplified Americanized racial identity. The loss of specific ancestral attachments among many white Americans also results from high patterns of intermarriage and ethnic blending among whites of different European stocks." [8]

African Americans are an ethnic group of Americans with total or partial ancestry from any of the black racial groups of Africa. The term African American generally denotes descendants of enslaved black people who are from the United States, while some recent black immigrants or their children may also come to identify as African-American or may identify differently. 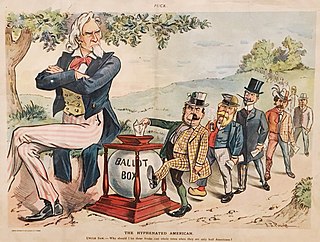 In the United States, the term hyphenated American refers to the use of a hyphen between the name of an ethnicity and the word "American" in compound nouns, e.g., as in "Irish-American". It was an epithet used from 1890 to 1920 to disparage Americans who were of foreign birth or origin, and who displayed an allegiance to a foreign country through the use of the hyphen. It was most commonly directed at German Americans or Irish Americans (Catholics) who called for U.S. neutrality in World War I.

British American usually refers to Americans whose ancestral origin originates wholly or partly in the United Kingdom. In the 2017 American Community Survey 1,891,234 individuals or 0.6% of the responses self-identified as British. It is primarily a demographic or historical research category for people who have at least partial descent from peoples of Great Britain and the modern United Kingdom, i.e. English, Scottish, Welsh, Scotch-Irish, Manx and Cornish Americans. There has been a significant drop overall, especially from the 1980 census where 49.59 million people reported English ancestry.

The Order of the Star Spangled Banner (OSSB) was an oath-bound secret society in New York City. It was created in 1849 by Charles B. Allen to protest the rise of Irish, Catholic, and German immigration into the United States.

In the United States, a White Hispanic is an individual who self-identifies as white and of Hispanic descent and/or speaks the Spanish language natively. White Latino Americans are a broader category, including people of Brazilian descent, who predominantly speak Portuguese, in addition to Spanish-speaking populations.

The legal and social strictures which define white Americans, and distinguish them from persons who are not considered white by the government and society, have varied throughout U.S. history.

The Know Nothing, formally known as the Native American Party and the American Party from 1855 onwards, was a nativist political party and movement in the United States, which operated nationwide in the mid-1850s, originally starting as a secret society. It was primarily an anti-Catholic, anti-immigration, populist and xenophobic movement, although it was also progressive "on issues of labor rights, opposition to slavery, and the need for more government spending" as well as for its "support for an expansion of the rights of women, regulation of industry, and support of measures designed to improve the status of working people". It was also a forerunner to the temperance movement in the United States and its nativist spirit is seen in both the American Protective Association and the Ku Klux Klan. The Know Nothing movement briefly emerged as a major political party in the form of the American Party. Adherents to the movement were to simply reply "I know nothing" when asked about its specifics by outsiders, providing the group with its common name.

The English diaspora consists of English people and their descendants who emigrated from England. The diaspora is concentrated in the English-speaking world in countries such as the United States, Canada, Australia, New Zealand, Scotland, Ireland, Wales and to a lesser extent, South Africa, South America, and continental Europe.

Americans are nationals and citizens of the United States of America. Although nationals and citizens make up the majority of Americans, many dual citizens, expatriates, and permanent residents may also claim American nationality. The United States is home to people of many ethnic origins. As a result, American culture and law does not equate nationality with race or ethnicity, but with citizenship and permanent allegiance.

Multiracial Americans are Americans who have mixed ancestry of two or more races. The term may also include Americans of mixed race ancestry who self-identify with just one group culturally and socially. In the 2010 US census, approximately 9 million individuals, or 2.9% of the population, self-identified as multiracial. There is evidence that an accounting by genetic ancestry would produce a higher number. Historical reasons, including slavery creating a racial caste and the European-American suppression of Native Americans, often led people to identify or be classified by only one ethnicity, generally that of the culture in which they were raised. Prior to the mid-20th century, many people hid their multiracial heritage because of racial discrimination against minorities. While many Americans may be considered multiracial, they often do not know it or do not identify so culturally, any more than they maintain all the differing traditions of a variety of national ancestries.

English Americans, or Anglo-Americans, are Americans whose ancestry originates wholly or partly in England. In the 2018 American Community Survey, 22.8 million self-identified as being of English origin.

Nativism is the political policy of promoting the interests of native inhabitants against those of immigrants, including the support of immigration-restriction measures.

The demographics of Georgia are inclusive of the ninth most populous state in the United States, with over 9.68 million people, just over 3% of America's population.