Ethnic Tibetans began to immigrate to the United States in the late 1950s. [3] Section 134 of the Immigration Act of 1990 gave a boost to the Tibetan immigration to the US, by providing 1,000 immigrant visas to Tibetans living in India and Nepal. [4] [3] Chain migration followed, and by 1998 the Tibetan-American population had grown to around 5,500, according to a census conducted by Central Tibetan Administration (CTA). The 2000 United States Census counted 5,147 US residents who reported Tibetan ancestry. [4]

An estimate of c. 7,000 was made in 2001, [3] and in 2008 the CTA's Office of Tibet in New York informally estimated the Tibetan population in the US at around 9,000. [4] In 2020, The Central Tibetan Administration estimated the number of Tibetans living in the United States to be over 26,700. [1] The migration of the Tibetans to the United States took on the pattern of 22 "cluster groups", located primarily in the Northeast, the Great Lakes region and the Intermountain West. Other communities include Austin, Texas and Charlottesville, Virginia. Tibetan Americans who are born in Tibet or elsewhere in China are officially recognized as Chinese nationals. [5]

Communities of Tibetan Americans in the Northeast exist in Boston and Amherst, Massachusetts, Ithaca, New York, and New York City, and in the states of Connecticut, Vermont and New Jersey. In New York and New Jersey, they live primarily in Queens and New Brunswick.

The town of Northfield, Vermont has been home for many years to the seat of the current Trijang Rinpoche, who has been estranged from the Dalai Lama due to the Dorje Shugden controversy, which has become a cultural heritage center for thousands of followers.

In the Mid-Atlantic region, the largest communities can be found in Northern Virginia, Washington D.C., Montgomery County, Maryland, Philadelphia, Pennsylvania, and Charlottesville, Virginia.

Communities of Tibetan Americans in the Great Lakes region exist in Chicago and in the states of Minnesota, Ohio, Indiana, Wisconsin and Michigan. There is a Tibetan Mongol Buddhist Cultural Center in Bloomington, Indiana near the campus of Indiana University. [6] The late brother of the Dalai Lama was a professor at the university.

Minnesota has the second largest concentration of Tibetan Americans in the United States. [7]

Every year, Seattle holds an annual Tibet Festival in August.

Although quite small in number overall, Colorado has one of the highest concentrations of Tibetans in North America, focused on Boulder, Colorado Springs, Douglas County and Crestone. The state has Naropa University whose values statement states, "We are Buddhist-inspired, ecumenical, and nonsectarian welcoming faculty, staff, and students of all faiths as well as those who don’t ascribe to any religion." [8] There is a Buddhist commune[ citation needed ] west of Castle Rock and several cities have Tibetan outreach organizations. Colorado Springs alone has three Tibetan stores and a restaurant.

Much of the reason[ citation needed ] behind this rather peculiar demographic is that Tibetan guerillas were secretly trained by the Central Intelligence Agency (CIA) at Camp Hale outside of Leadville. Camp Hale was used as a training camp for expatriate Tibetans to be inserted to aid the existing resistance in Tibet after the region was retaken by the Chinese People's Liberation Army, between 1959 and 1965.

From 1958 to 1960, Anthony Poshepny trained various special missions teams, including Tibetan Khambas and Hui Muslims, for operations in China against the Communist government. Poshepny sometimes claimed[ citation needed ] that he personally escorted the 14th Dalai Lama out of Tibet, but sources in the Tibetan exile deny this.

The site was chosen because of the similarities of the Rocky Mountains in the area with the Himalayan Plateau. The CIA parachuted four groups [9] of Camp Hale trainees inside Tibet between 1959 and 1960 to contact the remaining resistance groups, but the missions resulted in the death or capture of many team members. 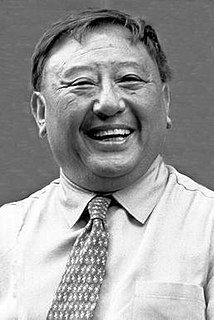 Kyabje Nawang Gehlek Rimpoche was a Tibetan Buddhist lama born in Lhasa, Tibet on October 26, 1939. His personal name was Gelek; kyabje and rimpoche are titles meaning "teacher" and "precious," respectively. He was a tulku, an incarnate lama of Drepung Monastic University, where he received the highest scholastic degree of Geshe Lharampa, equivalent to a PhD, at the exceptionally young age of 20. His father was the 10th Demo Rinpoche and his uncle was the 13th Dalai Lama, Thubten Gyatso. He was educated alongside the 14th Dalai Lama, Tenzin Gyatso.

The Kalmyk people are the only people of Europe whose national religion is Buddhism. In 2016, 53.4% of the population surveyed identified themselves as Buddhist. They live in Kalmykia, a federal subject of the Russian Federation located in southwestern Russia. The border faces Dagestan to the south, Stavropol Krai to the southwest, Rostov Oblast to the west, Volgograd Oblast to the northwest and Astrakhan Oblast to the east. The Caspian Sea borders Kalmykia to the southeast.

Ngawang Wangyal, aka Sogpo (Mongolian) Wangyal, popularly known as "Geshe Wangyal" and "America's first lama," was a Buddhist lama and scholar of Kalmyk origin. He was born in the Astrakhan province in southeast Russia sometime in 1901 and died in West Palm Beach, Florida in 1983. He came to the United States from Tibet in 1955 and was the spiritual leader of the Kalmuk Buddhist community near Freehold, New Jersey. He is considered a "founding figure" of Buddhism in the West. 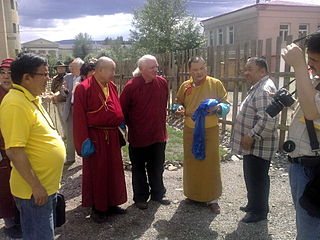 The Tibetan National Anthem, known as "Gyallu", is the anthem of the Tibetan Government in Exile and is strictly banned by the People's Republic of China, especially in the Tibet Autonomous Region. It was written by Trijang Rinpoche in 1950. 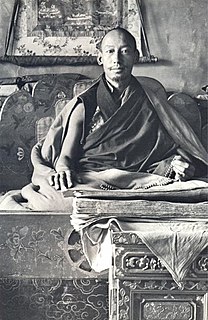 Rato Dratsang, also known as Rato Monastery, Rato Dratsang is a Tibetan Buddhist monastery of the Gelug or "Yellow Hat" order. For many centuries Rato Dratsang was an important monastic center of Buddhist studies in Central Tibet.

Nicholas Vreeland, also known as Rato Khen Rinpoche, Geshe Thupten Lhundup, is a fully ordained Tibetan Buddhist monk who is the abbot of Rato Dratsang Monastery, a 10th-century Tibetan Buddhist monastery reestablished in India. Vreeland is also a photographer. He is the son of Ambassador Frederick Vreeland and grandson of Diana Vreeland, the renowned fashion editor.