Ebara Corporation is a publicly traded manufacturing company based in Tokyo, Japan which makes environmental and industrial machinery such as pumps and turbines. It is the owner of the Elliott Company in the United States and Sumoto S.r.l. in Italy. [4] 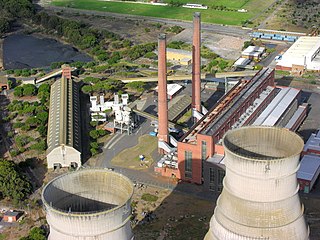 Garrett Motion Inc., formerly Honeywell Transportation Systems and Honeywell Turbo Technologies, is an American company primarily involved in engineering, development and manufacturing of turbochargers and related forced induction systems for ground vehicles from small passenger cars to large trucks and industrial equipment and construction machinery. It originated as part of Garrett AiResearch's Industrial Division in Phoenix, Arizona in 1954, after which they entered a contract to provide 5,000 turbochargers for the Caterpillar mining vehicle. It manufactured turbochargers for railroads and commercial trucks. The business produced approximately $3.2 billion in revenue in 2011. Garrett Motion is also involved in motorsports providing turbochargers and forced induction systems, solutions and related equipment to racing teams and various forms of automobile racing and professional competitions. In 2004, the business became part of American industrial conglomerate Honeywell International, Inc., as their Transportation Systems division. In 2018, it was spun off to become an independent company under the Garrett Motion name with corporate headquarters in Rolle, Switzerland.

Wärtsilä Oyj Abp, trading internationally as Wärtsilä Corporation, is a Finnish company which manufactures and services power sources and other equipment in the marine and energy markets. The core products of Wärtsilä include technologies for the energy sector, including gas, multi-fuel, liquid fuel and biofuel power plants and energy storage systems; and technologies for the marine sector, including cruise ships, ferries, fishing vessels, merchant ships, navy ships, special vessels, tugs, yachts and offshore vessels. Ship design capabilities include ferries, tugs, and vessels for the fishing, merchant, offshore and special segments. Services offerings include online services, underwater services, turbocharger services, and also services for the marine, energy, and oil and gas markets. At the end of June 2018, the company employed more than 19,000 workers. 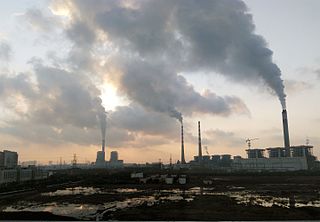 A thermal power station is a power station in which heat energy is converted to electricity. Typically, water is heated into steam, which is used to drive an electrical generator. After it passes through the turbine the steam is condensed in a steam condenser and recycled to where it was heated. This is known as a Rankine cycle. The greatest variation in the design of thermal power stations is due to the different heat sources: fossil fuel, nuclear energy, solar energy, biofuels, and waste incineration are all used. Certain thermal power stations are also designed to produce heat for industrial purposes, for district heating, or desalination of water, in addition to generating electrical power.

Kirloskar Group, is an Indian conglomerate company, headquartered in Pune, Maharashtra, India. The company exports to over 70 countries over most of Africa, Southeast Asia and Europe. The flagship & holding company, Kirloskar Brothers Ltd established in 1888, is India's largest maker of pumps and valves. Kirolskar Group is one of the major component suppliers for the indigenous Arihant Nuclear Submarine program 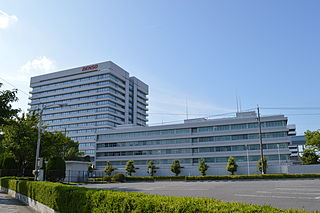 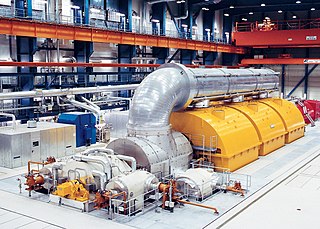 The Voith Group[fɔʏ̯t], which is headquartered in Germany, is a family-owned multinational corporation in the mechanical engineering sector as well as the automation and IIoT business with worldwide operations.

Doosan Group is a South Korean multinational conglomerate company. In 2009, the company was placed in the Fortune Global 500 index. It is the parent company of Bobcat and Škoda Power.

The Siemens Energy Sector was one of the four sectors of German industrial conglomerate Siemens. Founded on January 1, 2008, it generated and delivered power from numerous sources including the extraction, conversion and transport of oil and natural gas in addition to renewable and alternative energy sources. As of October 1, 2014, the sector level has been eliminated, including the Siemens Energy Sector.

Xylem Inc. is a large American water technology provider, in public utility, residential, commercial, agricultural and industrial settings. The company does business in more than 150 countries. Launched in 2011 as the spinoff of the water-related businesses of ITT Corporation, Xylem is headquartered in Rye Brook, New York, with 2018 revenues of $5.2 billion and 17,000 employees worldwide.

Kirloskar Brothers Limited (KBL) is a pump manufacturing company involved in engineering and manufacture of systems for fluid management. Established in 1888 and incorporated in 1920, KBL is the flagship company of the $2.5 billion Kirloskar Group. The market leader in fluid management, KBL provides fluid management solutions for large infrastructure projects in the areas of water supply, power plants, irrigation, oil & gas and marine & defence. The company engineers and manufactures industrial & petrochemical, agriculture & domestic pumps, valves and hydro turbines. In 2003 KBL acquired SPP Pumps (UK), United Kingdom and established SPP INC, Atlanta, USA, is as a wholly owned subsidiary of SPP, UK and expanded its international presence. In 2007, Kirloskar Brothers International B.V., The Netherlands and Kirloskar Brothers (Thailand) Ltd, a wholly owned subsidiary in Thailand were incorporated. In 2008, KBL incorporated Kirloskar Pompen B.V. which acquired Rodelta Pumps International B.V. in 2015 in The Netherlands. In 2010 KBL acquired Braybar Pumps, South Africa and in 2012 it established a manufacturing facility in Egypt as SPP MENA. KBL has joint venture cooperation with Ebara, Japan since 1988 under Kirloskar Ebara Pumps Ltd. Kirloskar Corrocoat Private Limited is joint venture cooperation with Corrocoat, UK since 2006. KBL acquired The Kolhapur Steel Limited in 2007, Hematic Motors in 2010.