In 2006, Daikin Industries acquired McQuay International, a Minneapolis, MN based global corporation that designs, manufacturers and sells commercial, industrial and institutional heating, ventilation and air conditioning (HVAC) products, [5] and in November of the same year, purchased OYL Industries.[ citation needed ] These acquisitions made Daikin Industries, a major global HVAC manufacturer, rivaling Carrier Corporation in total number of products produced, total dollar volume and worldwide territory coverage.[ citation needed ] In 2008, McQuay International was re-branded as Daikin-McQuay as Daikin began implementing many of its technologies (including the Daikin Inverter Compressor) and manufacturing processes into McQuay equipment and factories. However, in November 2013, the Daikin-McQuay group was again re-branded as Daikin Applied, [6] ending 80 years of business for the McQuay name.

In 2008 Daikin purchased a 75% share of All World Machinery Supply based in Roscoe, Illinois. [7] Daikin developed the hybrid hydraulic systems using technology from their Air Conditioning division[ clarification needed ]. Facing the global demands on CO2 reductions and the serious energy issues facing the world, this product aims to cut energy consumption[ how? ] in the manufacturing sector. As of 2009, Daikin Airconditioning Philippines is established. [8]

In August 2012 Daikin agreed to acquire Goodman Global from the San Francisco-based private equity firm Hellman & Friedman for $3.7 billion, [9] after first planning to buy Goodman the previous year. In January 2011, Daikin had announced plans to buy Goodman Global at approximately US$4 billion valuation, [10] however, the plans were put off following the 2011 Tōhoku earthquake and tsunami [11] The acquisition was expected to expand Daikin's presence in the United States and in duct-type and split-system air-conditioners, and was expected to make Daikin the world's largest maker of heating, ventilation and air-conditioning systems. [12] [ needs update ]

In 2017, Daikin opened the Daikin Texas Technology Park, its largest plant and the fifth largest factory in the world. Costing $417 million, this 4.1 million square-foot facility in Waller, Texas will consolidate Goodman's manufacturing operations. [14] [15]

For quite some time, Daikin Industries Ltd has been doing business with independent dealers in Africa. However, in 2006, Daikin merged the UAE with the East African market by creating Daikin Middle East and Africa. On January 20, 2017, they sponsored the DAIKIN PREMIER LEAGUE - Season 7.

In August 2016, Daikin Industries Ltd opened a fully functional headquarters in Cairo, Egypt. Daikin Cairo [17] is yet another move for the company to establish business in Africa. Plans are underway to open more headquarters.

Moog is an American-based designer and manufacturer of motion and fluid controls and control systems for applications in aerospace, defense, industrial and medical devices. The company operates under four segments: aircraft controls, space and defense controls, industrial controls, and components.

The Weir Group plc is a British multinational engineering company headquartered in Glasgow, Scotland. It is listed on the London Stock Exchange and is a constituent of the FTSE 250 Index.

FKM is a family of fluorocarbon-based fluoroelastomer materials defined by the ASTM International standard D1418 and ISO 1629. It is called FPM in some other standards, and is commonly called fluorine rubber or fluoro-rubber. All FKMs contain vinylidene fluoride as a monomer. Originally developed by DuPont, FKMs are today also produced by many companies, including: Daikin (Dai-El) 3M (Dyneon), Solvay S.A. (Tecnoflon), HaloPolymer (Elaftor), Gujarat Fluorochemicals (Fluonox), Zrunek (ZruElast), and several Chinese manufacturers including VSK Industrial. Fluoroelastomers are more expensive than neoprene or nitrile rubber elastomers. They provide additional heat and chemical resistance. FKMs can be divided into different classes on the basis of either their chemical composition, their fluorine content, or their cross-linking mechanism.

Worthington Industries, Inc. is a global diversified metals manufacturing company based in Columbus, Ohio. It is a steel processor and manufacturer of pressure vessels, such as propane, oxygen and helium tanks, hand torches, refrigerant and industrial cylinders, camping cylinders, exploration, recovery and production products for global energy markets; water system tanks for storage, treatment, heating, expansion and flow control, and compressed natural gas storage cylinders. The company also manufactures framing systems for mid-rise buildings and steel pallets and racks for shipping. It is the largest independent processor of flat-rolled steel in the United States. The company takes steel from steel producers and processes it for customers in industries including automotive, lawn and garden, construction, hardware, office furniture, electrical control, leisure and recreation, appliance, agriculture and HVAC.

Dover Corporation is an American conglomerate manufacturer of industrial products. Founded in 1955 in New York City, Dover is now based in Downers Grove, Illinois, and employs more than 26,000 people worldwide. As of 2014, Dover's business was divided into three segments: Engineered Systems, Fluids, and Refrigeration and Food Equipment. By 2020, there were five segments, with Imaging and Identification and Pumps and Process having been added. Each segment holds operating companies that are run like independent companies. Dover is a constituent of the S&P 500 index and trades on the New York Stock Exchange under "DOV". Dover is ranked 360th on the Fortune 500. The company relocated its headquarters to Illinois from New York in mid-2010. 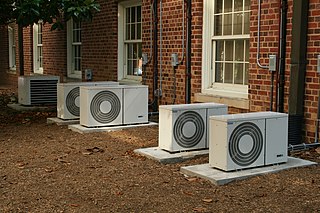 Air conditioning is the process of removing heat and controlling the humidity of the air in a space. Air conditioning can be used in both domestic and commercial environments. This process is most commonly used to achieve a more comfortable interior environment, typically for humans and other animals; however, air conditioning is also used to cool and dehumidify rooms filled with heat-producing electronic devices, such as computer servers, power amplifiers, and to display and store some delicate products, such as artwork.

Watsco, Inc. is the largest distributor of air conditioning, heating and refrigeration equipment and related parts and supplies (HVAC/R) in the United States. Watsco was founded more than 60 years ago as a manufacturer of parts, components and tools used in the HVAC/R industry. Under the leadership of its current CEO, Albert H. Nahmad, from 1973 to 1988 Watsco grew from US$5 million in revenues to US$25 million. In 1989, the company shifted its focus from manufacturing to distribution by acquiring Gemaire Distributors Inc., a South Florida-based Rheem distributor. By 1997, Watsco added other OEMs to the mix and moved into commercial refrigeration as a result of the acquisition of Baker Distributing Company. Watsco divested its manufacturing business in 1998, selling it to International Comfort Products Corporation, now part of Carrier Corporation (Carrier). Revenues increased from US$64.1 million in 1989 to US$4.5 billion in 2018 via a strategy of acquiring companies with established market position and subsequently building revenues and profit through a combination of adding locations, products, services and other initiatives.

Goodman Manufacturing is an American company operating as an independent subsidiary , of Daikin Group, the world's largest manufacturer of heating, ventilation and air conditioning products and systems. The company, founded in 1975 and based in Houston, Texas, manufactures residential heating and cooling systems.

Daikin Applied Americas is a global corporation that designs, manufacturers and sells heating, ventilation, and air conditioning (HVAC) products, systems, parts and services for commercial buildings. Since 2006, McQuay has been a subsidiary of Daikin Industries, Ltd. McQuay world headquarters are located in Minneapolis, Minnesota, United States. Products are sold by a global network of sales representatives and distributors. 5 September 2002 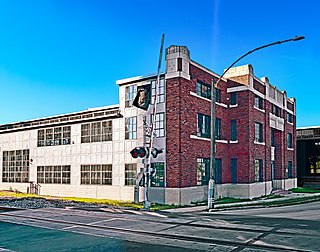 Variable refrigerant flow (VRF), also known as variable refrigerant volume (VRV), is an HVAC technology invented by Daikin Industries, Ltd. in 1982. Like ductless minisplits, VRFs use refrigerant as the cooling and heating medium. This refrigerant is conditioned by a single or multiple condensing units, and is circulated within the building to multiple indoor units. VRF systems, unlike conventional chiller-based systems, allow for varying degrees of cooling in only certain areas, reducing energy consumption.

Airedale International Air Conditioning based in Leeds, West Yorkshire, England is a British manufacturer and worldwide distributor of cooling, heating and HVAC systems.

J & E Hall is an English manufacturer of refrigeration equipment. It was originally established as an iron works in Dartford, Kent in 1785, with products including papermaking machines, steam engines and gun carriages, before it started producing refrigeration machinery in the 1880s. During the early 20th century, the company diversified to produce commercial vehicles, lifts and escalators, before refocusing on its core refrigeration and air conditioning products in the late 1960s. The company retains a head office and some R&D facilities in Dartford.