Film and Television Institute of India

The Film and Television Institute of India (FTII) is a film institute under the Ministry of Information and Broadcasting of the Government of India and central civil service trainning institute for central civil servants of Indian Information Service cadre. [1] It is situated on the premises of the erstwhile Prabhat Film Company in Pune. It was established in 1960 and its alumni includes technicians, actors and directors in the film and television industry.

FTII is a member of the International Liaison Centre of Schools of Cinema and Television (CILECT), an organisation of the world's leading schools of film and television. [2]

The Centre will set up a new Institute in Arunachal Pradesh as part of an initiative to tap the potential of the North Eastern region, Union Minister of State (Independent Charge) for Development of North Eastern Region, Dr. Jitendra Singh has informed.

The institute was established in 1960 and started its courses in 1961. The Television Training wing, which was earlier functioning in New Delhi, shifted to Pune in 1974. Thereafter, the institute became fully aided by the Ministry of Information and Broadcasting. In July 2011, Information and Broadcasting Minister Ambika Soni said that a bill in Parliament to develop the FTII into a 'Centre of Excellence' would be introduced. This would enable the institute to enjoy the academic status and privileges of a university.

The Institute offers three-year post-graduate diploma courses in film direction, editing, cinematography and audiography; two-year courses in acting and art direction; a one and a half year course in computer graphics and animation; a one-year course in feature film scriptwriting. One-year post-graduate certificate in direction, electronic cinematography, video editing and audiography are also part of the courses offered.

The FTII is registered under Societies' Registration Act of 1860. The Society is headed by a President, who also functions as the Chairman of the Governing Council, the Academic Council and the Standing Finance Committee. The Governing Council is constituted by election from among the members of the Society. The Governing Council is the apex body of the FTII and is responsible for making all major policy decisions of the Institute. The council, in turn, appoints the Academic Council and the Standing Finance Committee, members of both of which are responsible for advising the FTII in policy matters related to academic affairs and financial matters. [3] [4]

A Director serves as the institute's Executive Head and implements its policies and programmes. Prashant Pathrabe, a 1992 batch officer of Indian Information Service (IIS), has been given temporary charge as Director following end of the term of DJ Narain. [5] Gajendra Chauhan, the designated chairman of the governing council, is yet to join, owing to protest overs his appointment. [3] The protests have been continuing for over 95 days but the logjam over appointment still remains. [6]

Wisdom Tree in FTII is like a informal Master Class where students discuss topics with Filmmakers. [13]

In 2015, Gajendra Chauhan was appointed [14] as the chairman of the institute which sparked protests by students at the institute.

On 18 August 2015, police — in a night-time crackdown — arrested striking students who confined FTII director Prashant Pathrabe and other staffers in his office for eight hours. The director claimed that students harassed and mentally tortured him. The students were released on bail.

A video showing students surrounding the director and shouting was released by the management. In response the students released an undated video of cops manhandling students and breaking glass in the director's office, The striking students vehemently condemned the act by the Pune police to come and arrest students past midnight. [15] [16] 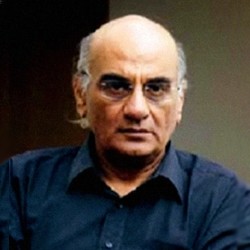 Mani Kaul was an Indian director of Hindi films and a reputed figure in Indian parallel cinema. He graduated from the Film and Television Institute of India (FTII) where he was a student of Ritwik Ghatak and later became a teacher. Starting his career with Uski Roti (1969), which won him the Filmfare Critics Award for Best Movie, he went on to win four of them in all. He won the National Film Award for Best Direction in 1974 for Duvidha and later the National Film Award for his documentary film Siddheshwari in 1989.

Satyajit Ray Film and Television Institute (SRFTI) is a film and television institute located in Kolkata, West Bengal, India. Named after Indian filmmaker Satyajit Ray, the institute provides higher and professional education and technical expertise in the art and technique of film-making and television production. Established in 1995, the institute is an autonomous society funded by Ministry of Information and Broadcasting, Government of India.

Vinod Sukumaran is an Indian film maker and film editor. He won the National Film Award for Best First Non-Feature Film of a Director for the film Diary of a Housewife in 2001.

ILS Law College, or in its full name Indian Law Society's Law College, is a government-aided law school in Pune, India. It was established in 1924 and offers courses that include three-year and five-year degrees. ILS is located on Law College Road, Pune. The college was aided by The Ford Foundation.

Nirad Narayan Mohapatra was an Indian film director. Mohapatra was born in the Indian state of Odisha. He directed the Oriya language film Maya Miriga, television soap operas and documentaries.

Kiran Seth is an Indian academician, Professor Emeritus in the department of Mechanical Engineering at the Indian Institute of Technology Delhi. He is most known as the founder of SPIC MACAY (1977), a non-profit organisation which promotes Indian classical music, Indian classical dance, and other aspects Indian culture, amongst youth the world over; through its about 500 chapters and through conventions, baithaks, lectures and musical fests. 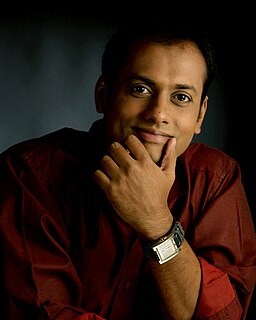 S. Manasvi is an architect from Madhav Institute of Technology and Science (MITS), Gwalior who later, became a filmmaker and a writer. He is an alumnus of the Film and Television Institute of India, Pune. After passing out of FTII in 2004, he made corporate films, adfilms, music videos and wrote for Television. He has been credited the dialogue writer for Left Right Left, Choti Bahu and several other shows. He also wrote the dialogue for Parvarrish – Kuchh Khattee Kuchh Meethi, Ek Boond Ishq and Hum Hain Na. Currently, he is writing the dialogue for Ek Veer Ki Ardaas...Veera and Dilli Wali Thakur Gurls, and developing shows.

Beena Paul, also known by her married name Beena Paul Venugopal, is an Indian film editor who works mainly in Malayalam-language films. A graduate of the University of Delhi, she completed a course on film editing from the Film and Television Institute of India (FTII), Pune, in 1983. She is the recipient of two National Film Awards and three Kerala State Film Awards. She has held several positions including the artistic director of International Film Festival of Kerala (IFFK) and the vice chairperson of Kerala State Chalachitra Academy.

Satish Bahadur, was an Indian film critic who served as Professor of Film Appreciation (1963–83) at the Film and Television Institute of India, Pune, India, and a close associate of Marie Seton, Vijaya Mulay and PK Nair.

Paramesh Krishnan Nair was an Indian film archivist and film scholar, who was the founder and director of the National Film Archive of India (NFAI) in 1964. He is regarded as the Henri Langlois of India because of his lifelong dedication towards the preservation of films in India. A passionate film archivist, he worked at the NFAI for over three decades, collecting films from India and from all over the world.

Gajendra Singh Chauhan, known professionally as Gajendra Chauhan, is a former supporting television actor known for his work on Indian television, especially his portrayal of Yudhishthira in the historical television series Mahabharat (1988–90). He has also had significant roles in a few B movies, and a larger number of cameo appearances in other films. In 2015, he was appointed chairman of the Film and Television Institute of India (FTII), which sparked controversy and opposition by FTII students, leading to his resignation in October 2017.

Jagat Murari was a distinguished Indian documentary filmmaker, known well for his contributions to Indian cinema as a producer, director and, above all, educator. He played a pioneering role in a number of key film institutions in India, including the Film & Television Institute of India (FTII), the National Film Archive of India (NFAI), and the Directorate of Film Festivals (DFF). Murari is well remembered for nurturing young, talented students as head of FTII, Pune between 1962 and 1971, many of whom are now well known names in the Bollywood industry, including Jaya Bhaduri, Shabana Azmi, Adoor Gopalakrishnan and Subhash Ghai.

K. Hariharan is an Indian film director who has directed films in Tamil, Marathi and Hindi. Currently he is the professor of Film Studies at Krea University. Born in Mumbai, Maharashtra, his father H.Krishnan was the vice-president of Eastman Kodak. An alumnus of the Film and Television Institute of India (FTII), Hariharan formed "Yukt Film Co-operative" in 1976 together with his batch mates to make an experimental film called Ghashiram Kotwal. Ezhavathu Manithan, his directorial debut in Tamil cinema, won the National Film Award for Best Feature Film in Tamil and was nominated for Golden St. George at the Moscow International Film Festival.

T. Krishnanunni is a sound designer in India. He has received multiple National Film Awards and Kerala State Film Awards. He has worked with almost all the eminent film makers in Kerala, including Adoor Gopalakrishnan, G. Aravindan and Shaji N. Karun.

The State Institute of Film and Television (SIFTV) is a Film School under the State University of Performing And Visual Arts located in Rohtak, Haryana, India. The institute was established in 2011 by the Government of Haryana to grow regional cinema.

Sanal George is an Indian sound designer and production sound mixer who is based in Mumbai. He is the recipient of the 65th National Film Award of India for Best Sound Design for the feature film Walking with the Wind. He was also awarded the Asian Film Academy fellowship in 2013 as part of the Busan International Film Festival, Busan, South Korea. Sanal was awarded the Kerala State Television Award 2016 for the Malayalam short film Chaver.