Intel Quark is a line of 32-bit x86 SoCs and microcontrollers by Intel, designed for small size and low power consumption, and targeted at new markets including wearable devices. The line was introduced at Intel Developer Forum in 2013, and discontinued in January 2019. [1] Quark processors, while slower than Atom processors, are much smaller and consume less power. They lack support for SIMD instruction sets (such as MMX and SSE) [2] and only support embedded operating systems. Quark powers the (now discontinued) Intel Galileo developer microcontroller board. [3] However, in 2016 Arduino released the Arduino 101 board [4] that includes an Intel Quark SoC. [5] The CPU instruction set is the same as a Pentium (P54C/i586) CPU. [6]

The first product in the Quark line is the single-core 32 nm X1000 SoC with a clock rate of up to 400  MHz. The system includes several interfaces, including PCI Express, serial UART, I²C, Fast Ethernet, USB 2.0, SDIO, power management controller, and GPIO. There are 16  kB of on-chip embedded SRAM and an integrated DDR3 memory controller. [7] [8]

A second Intel product that includes Quark core, the Intel Edison microcomputer, was presented in January 2014. It has a form factor close to the size of an SD card, and is capable of wireless networking using Wi-Fi or Bluetooth. [9]

In January 2015, Intel announced the sub-miniature Intel Curie module for wearable applications, based on a Quark SE core with 80  kB SRAM and 384 kB flash. [10] At the size of a button, it also features a 6-axis accelerometer, a DSP sensor hub, a Bluetooth LE unit and a battery charge controller.

Intel Quark SoC X1000 contains a bug #71538 [15] that "under specific circumstances" results in a type of crash known as a segfault. The workaround implemented by Intel is to omit LOCK prefixes (not required on single-threaded processors) in the compiled code. [16] While source-based embedded systems like those built using the Yocto Project can incorporate this workaround at compile time, general purpose Linux distributions such as Debian are deeply affected by the bug. Such a workaround is not easy to implement in binaries meant to support multithreading too as they require LOCK prefixes to function properly. [17]

A system on a chip is an integrated circuit that integrates all or most components of a computer or other electronic system. These components almost always include a central processing unit (CPU), memory, input/output ports and secondary storage, often alongside other components such as radio modems and a graphics processing unit (GPU) – all on a single substrate or microchip. It may contain digital, analog, mixed-signal, and often radio frequency signal processing functions.

XScale is a microarchitecture for central processing units initially designed by Intel implementing the ARM architecture instruction set. XScale comprises several distinct families: IXP, IXC, IOP, PXA and CE, with some later models designed as SoCs. Intel sold the PXA family to Marvell Technology Group in June 2006. Marvell then extended the brand to include processors with other microarchitectures, like ARM's Cortex.

Atmel Corporation was a designer and manufacturer of semiconductors before being subsumed by Microchip Technology in 2016. Atmel was founded in 1984. The company focused on embedded systems built around microcontrollers. Its products included microcontrollers radio frequency (RF) devices including Wi-Fi, EEPROM, and flash memory devices, symmetric and asymmetric security chips, touch sensors and controllers, and application-specific products. Atmel supplies its devices as standard products, application-specific integrated circuits (ASICs), or application-specific standard product (ASSPs) depending on the requirements of its customers.

The ARM Advanced Microcontroller Bus Architecture (AMBA) is an open-standard, on-chip interconnect specification for the connection and management of functional blocks in system-on-a-chip (SoC) designs. It facilitates development of multi-processor designs with large numbers of controllers and components with a bus architecture. Since its inception, the scope of AMBA has, despite its name, gone far beyond microcontroller devices. Today, AMBA is widely used on a range of ASIC and SoC parts including applications processors used in modern portable mobile devices like smartphones. AMBA is a registered trademark of ARM Ltd.

Atmel ARM-based processors are microcontrollers and microprocessors integrated circuits, by Microchip Technology, that are based on various 32-bit ARM processor cores, with in-house designed peripherals and tool support. 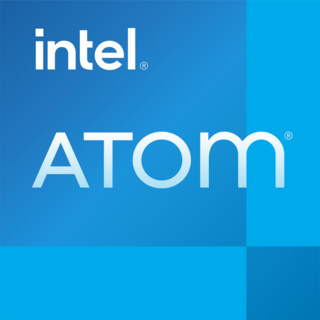 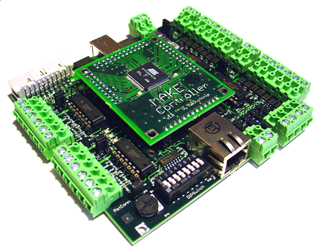 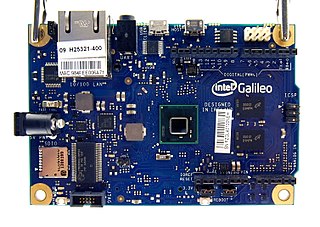 Intel Galileo is the first in a line of Arduino-certified development boards based on Intel x86 architecture and is designed for the maker and education communities. Intel released two versions of Galileo, referred to as Gen 1 and Gen 2. These development boards are sometimes called "Breakout boards".

The Intel Edison is a computer-on-module that was offered by Intel as a development system for wearable devices and Internet of Things devices. The system was initially announced to be the same size and shape as an SD card and containing a dual-core Intel Quark x86 CPU at 400 MHz communicating via Bluetooth and Wi-Fi. A later announcement changed the CPU to a 500 MHz Silvermont dual-core Intel Atom CPU, and in September 2014 a second version of Edison was shown at IDF, which was bigger and thicker than a standard SD card.