This generational list of Intel processors attempts to present all of Intel's processors from the pioneering 4-bit 4004 (1971) to the present high-end offerings. Concise technical data is given for each product.

All processors are listed here in chronological order.

They are ICs with CPU, RAM, ROM (or PROM or EPROM), I/O Ports, Timers & Interrupts

Introduced in the third quarter of 1974, these components used bipolar Schottky transistors. Each component implemented two bits of a processor function; packages could be interconnected to build a processor with any desired word length. Members of the family:

Not listed (yet) are several Broadwell-based CPU models: [12]

Note: this list does not say that all processors that match these patterns are Broadwell-based or fit into this scheme. The model numbers may have suffixes that are not shown here.

Intel discontinued the use of part numbers such as 80486 in the marketing of mainstream x86-architecture microprocessors with the introduction of the Pentium brand in 1993. However, numerical codes, in the 805xx range, continued to be assigned to these processors for internal and part numbering uses. The following is a list of such product codes in numerical order:

The Pentium Pro is a sixth-generation x86 microprocessor developed and manufactured by Intel and introduced on November 1, 1995. It introduced the P6 microarchitecture and was originally intended to replace the original Pentium in a full range of applications. While the Pentium and Pentium MMX had 3.1 and 4.5 million transistors, respectively, the Pentium Pro contained 5.5 million transistors. Later, it was reduced to a more narrow role as a server and high-end desktop processor and was used in supercomputers like ASCI Red, the first computer to reach the trillion floating point operations per second (teraFLOPS) performance mark. The Pentium Pro was capable of both dual- and quad-processor configurations. It only came in one form factor, the relatively large rectangular Socket 8. The Pentium Pro was succeeded by the Pentium II Xeon in 1998.

Montecito is the code-name of a major release of Intel's Itanium 2 Processor Family (IPF), which implements the Intel Itanium architecture on a dual-core processor. It was officially launched by Intel on July 18, 2006 as the "Dual-Core Intel Itanium 2 processor". According to Intel, Montecito doubles performance versus the previous, single-core Itanium 2 processor, and reduces power consumption by about 20%. It also adds multi-threading capabilities, a greatly expanded cache subsystem, and silicon support for virtualization. 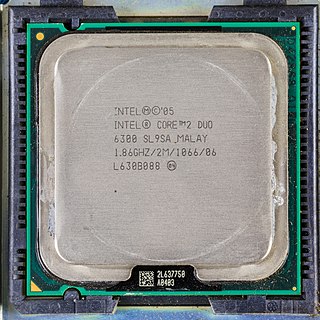