Three and a half Shakti Peethas

Three and a half Shakti Peethas (prominent seats of the Hindu Goddess) are reported in Maharashtra. [1]

These four Goddess temples are:

The Mahalaxmi (also known as Ambabai) Temple situated in Kolhapur, Maharashtra, India, is one of the 18 Maha Shakti Peethas listed in skanda puran, and one of 52 Shaktipeeths according to various Puranas of Hinduism. According to these writings, a Shakti Peetha is a place associated with Shakti, the Goddess of power. This is the place where maa Sati's 3 eyes fell. The Kolhapur Shakti Peetha is of special religious significance being one of the six places where it is believed that one can either obtain salvation from desires or have them fulfilled. Kolhapur Peeth is also known as Karvir Peeth or Shree Peetham. Lakhs of devotees visit the temple every year, from all over Maharashtra, Karnataka and Telangana.

Tulja Bhavani Temple is a Hindu temple dedicated to the goddess parvati. Goddess parvati live here in her tulja bhavani form. [4] She is also known as the supreme goddess or adiparashakti. She is guardian goddess [ kulswanimi ] of Bharat. It is located in Tuljapur in Osmanabad district of Maharashtra and is considered as one of the 51 Shakti Pithas. It is situated 45  km from Solapur. The temple was built in c. 12th century CE.

Reṇukā/Renu is a Hindu goddess worshipped predominantly in the Indian state of Maharashtra."Renu" means "Atom/Mother of Universe" [5] She is also worshipped in the South Indian states of Andhra Pradesh, Himachal Pradesh, Karanataka, Tamil Nadu, and Telangana. [6] Renuka's temple at Mahur in Maharashtra is considered one of the shakti peethas. Renuka is also called as "Renu" which means "Atom/Mother of Universe". [7]

Saptashrungi Saptaśrr̥ṇgī) is a site of Hindu pilgrimage situated 60 kilometres (37 mi) from Nashik in west Indian state of Maharashtra in India. According to Hindu traditions, the goddess Saptashrungi Nivasini dwells within the seven mountain peaks. (Sapta means seven and shrung means peaks.) It is located in Nanduri, Kalwan taluka, a small village near Nashik in India. Devotees visit this place in large numbers every day. [8] The temple is also known popularly as one of the "three and half Shakti Peethas" of Maharashtra. The temple is also one among the 51 Shakti Peethas located on the Indian subcontinent and is a location where one of Sati's (first wife of Lord Shiva) limbs, her right arm is reported to have fallen. Its half shaktipeeth among three and half shaktipeeth of Maharashtra. 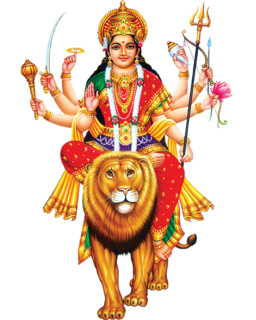 Bhavānī is a form, manifestation and another term representing mother goddess Durga also known as Parvati or Adi Shakti, who is worshiped in Maharashtra by Agris of Bhoir, and also by Rajputs of North Gujarat, Northern Karnataka, Western Rajasthan and Punjab. Bhavani translates to "giver of life", meaning the power of nature or the source of creative energy. She is considered to be a mother who provides to her devotees and also plays the role of dispensing justice by killing Asuras.

Osmanabad District is an administrative district in the Marathwada region in the Indian state of Maharashtra. The district headquarter is located at Osmanabad. The District of Osmanabad derives its name from the last ruler of Hyderabad, the 7th Nizam, Mir Osman Ali Khan, of which the region was a part till 1947. This region was earlier part of The Hyderabad State until Independence.This primarily rural district occupies an area of 7,569 km2 (2,922 sq mi) of which 241.4 km2 (93.2 sq mi) is urban and has a population of 1,657,576 of which 16.96% were urban. 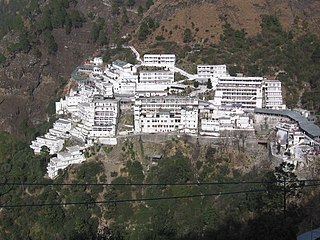 The Shakti Pitha or the Shakti Peethas are significant shrines and pilgrimage destinations in Shaktism, the goddess-focused Adi Shakti in Hindu tradition. According to some puranas, especially Srimad Devi Bhagavatam, there are 51, 64 and 108 Shakti peethas by various accounts, of which 18 are named as Astadasha Maha (major) in medieval Hindu texts. 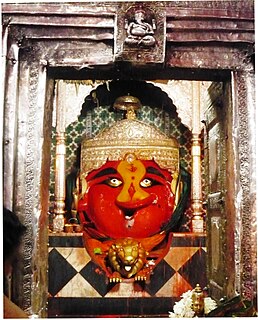 Mahur or Mahurgad is a town and religious place in Nanded district of Maharashtra, India. Mahur is the birthplace of Hindu God Dattatreya. Dattatreya parents Atri Rishi and Sati Anasuya Mata lived here. Brahmadev, Vishnudev and Lord Shiva once got a news about Anusaya Mata that there is no one more pious and pure as her. To test her piousness they arrived under the garb of asking Alm (bhiksha). Near Mahur, There is a Pious confluence of River Penganga and River Pus at Hiwara Sangam village, Tal. Mahagaon Vidarbha, from where the river flows northward. Penganga river forms a border between Vidarbha and Marathwada. Mahur falls just about 3kms inside Marathwada due to river banks.

Renuka. also known as Yellamma, is a Hindu goddess, who is worshipped predominantly in Maharashtra, and the South Indian states of Tamil Nadu, Telangana, Karnataka, and Andhra Pradesh. She is also known as the mother of Parashurama, the sixth avatar of the god Vishnu. Originally a Dravidian folk deity, she acquired the status of a mother goddess before eventually being associated with the legend of Parashurama. 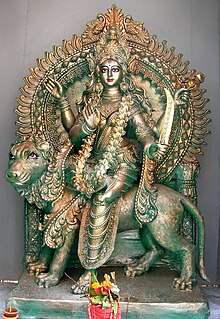 Katyayani (कात्यायनी) is the sixth aspect of the Navadurga forms of Mahadevi. She is seen as the slayer of the tyrannical demon Mahishasura. She is also the sixth form amongst Navadurga or the nine forms of Hindu goddess Durga, worshipped during the Navaratri celebrations. She may be depicted with four, ten, or eighteen hands. This is the second name given for Goddess Adi Parashakti in Amarakosha, the Sanskrit lexicon.

Tuljapur is a town with a municipal council in Osmanabad district in the Indian state of Maharashtra. It is the administrative seat of Tuljapur taluka.

Saptashrungi or Saptashringi is a site of Hindu pilgrimage situated 60 kilometres (37 mi) from Nashik in Indian state of Maharashtra. According to Hindu traditions, the goddess Saptashrungi Nivasini dwells within the seven mountain peaks. It is located in Nanduri, Kalwan taluka, a small village near Nashik in India. The Marathas and some Bhil tribes worship the goddess from a long time and some worship as their kuldaivat. There are 510 steps to climb the gad. Devotees visit this place in large numbers every day. The temple is also known popularly as one of the "three and half Shakti Peethas" of Maharashtra. The temple is also one among the 51 Shakti Peethas located on the Indian subcontinent and is a location where one of Sati's limbs, her right arm is reported to have fallen. Its half shaktipeeth among three and half shaktipeeth of Maharashtra. 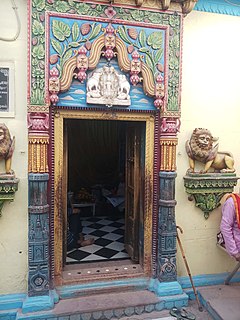 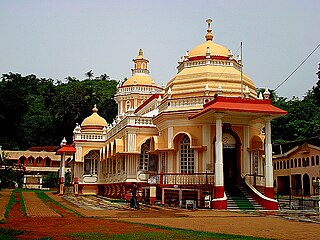 Kula-dèvatā (transl. clan-deity), also known as Kuladeva or Kuladevi, is an ancestral tutelary deity in Hinduism, who is often the object of one's devotion (bhakti) in order to coax the deity to watch over one's clan (kula), family and children from misfortune. This is distinct from ishta-devata and village deities.

Tulja Bhavani Temple is a Hindu temple dedicated to the goddess Parvati also referred to as Durga and Sati. It is located in Tuljapur in Dharashiv district of Maharashtra, India, and is considered one of the 51 Shakti Pithas. It is situated 45 km from Solapur. The temple was built in 12th century CE by Maratha Mahamandaleshwara Māradadeva Kadamb. The management and priestly rights of the temple are held by the Kadamb Bhope clan, the descendants of Māradadeva. Goddess Tulja Bhavani is known by the names Tulaja, Turaja, Tvarita, Durga, Parvati, Amba and Jagadambaa in different regions. 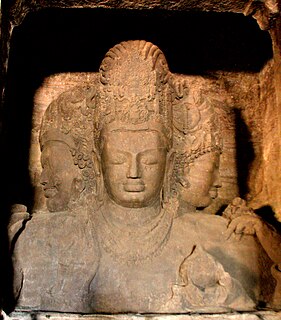 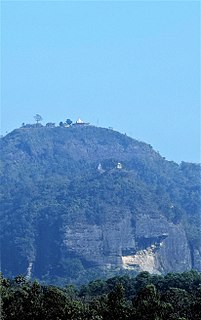 Chandranath Temple, located on top of the Chandranath Hill, is a famous Shakti Peeth located near Sitakunda in Bangladesh where, as per Hindu sacred texts, the right arm of Goddess Sati fell. Chandranath Temple is a pilgrimage site for Hindus. Its height about 1,020 feet (310 m) above sea level.

Shivaharkaray or Karavipur is a Shakti Peeth dedicated to the Hindu Goddess Durga, located near Parkai railway station, near Karachi, Pakistan. It is one of the two Shakti Peethas in Pakistan, other being Hinglaj Mata mandir Puranas describe that the three eyes of the Goddess fell here after she committed Sati. The Goddess is worshipped as Mahishasuramardini, or the slayer of the Demon Mahishasur. Her consort, the Hindu God Shiva, is worshipped in Ragi form as Krodhish, personification of anger. Shivaharkaray is third in the list of 51 Peethas identified in the Puranas.

In Hinduism, especially Shaktism, Shakti is the primordial cosmic energy, and represents the dynamic forces that are thought to move through the universe. This energy is thought of as creative, sustaining, as well as destructive, and is sometimes referred to as auspicious source energy.

Religion and spirituality, a pilgrimage is a long journey or search of great moral significance. Sometimes, it is a journey to a sacred place or shrine of importance to a person's beliefs and faith. Members of every major religion participate in pilgrimages. A person who makes such a journey is called a pilgrim.

Shri Shri Mahalakshmi Bhairabi Griba Maha Peetha is one of the Shakti Peeths, at Joinpur village, Dakshin Surma, near Gotatikar, 3 km south-east of Sylhet town, Bangladesh. The Hindu Goddess Sati's neck fell here. The Goddess is worshipped as Mahalakshmi and the Bhairav form is Sambaranand.

Sugandha Shaktipeeth, a temple of the Goddess Sunanda, is located in the village of Shikarpur, 10 miles north of Barisal, in Bangladesh. This Hindu temple is one of the Shakti Peethas. 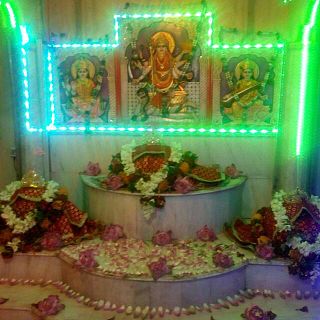 Bindudham, also known as Binduwasni Mandir, is a Hindu Temple, is located at Barharwa in Sahibganj District of Indian state Jharkhand and dedicated to the Maha Durga (Kali), Maha Lakshmi and Maha Saraswati (Tridevi) in the form of Shaktipeeth. Binduwasni Mandir is at the top of the "Binduwasni hill". The main temple has a statue of the Hindu god Surya (Sun). He is seated in a Seven horsed Rath. In another part of Binduwasni hill, a large 35-foot statue of Hanuman stands, where people can see his sacred foot prints. A Rama temple is under construction now in the same site. 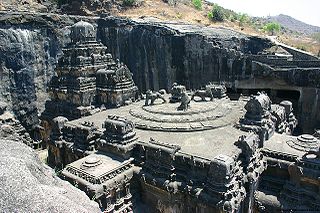