A taxonomy is an arrangement in a systematic manner; the USDA soil taxonomy has six levels of classification. They are, from most general to specific: order, suborder, great group, subgroup, family and series. Soil properties that can be measured quantitatively are used in this classification system – they include: depth, moisture, temperature, texture, structure, cation exchange capacity, base saturation, clay mineralogy, organic matter content and salt content. There are 12 soil orders (the top hierarchical level) in soil taxonomy. [2] [3] The names of the orders end with the suffix -sol. The criteria for the different soil orders include properties that reflect major differences in the genesis of soils. [4] The orders are:

The percentages listed above [5] are for land area free of ice. "Soils of Mountains", which constitute the balance (11.6%), have a mixture of those listed above, or are classified as "Rugged Mountains" which have no soil.

The above soil orders in sequence of increasing degree of development are Entisols, Inceptisols, Aridisols, Mollisols, Alfisols, Spodosols, Ultisols, and Oxisols. Histosols and Vertisols may appear in any of the above at any time during their development.

The soil suborders within an order are differentiated on the basis of soil properties and horizons which depend on soil moisture and temperature. Forty-seven suborders are recognized in the United States. [6]

The soil great group category is a subdivision of a suborder in which the kind and sequence of soil horizons distinguish one soil from another. About 185 great groups are recognized in the United States. Horizons marked by clay, iron, humus and hard pans and soil features such as the expansion-contraction of clays (that produce self-mixing provided by clay), temperature, and marked quantities of various salts are used as distinguishing features. [6]

The great group categories are divided into three kinds of soil subgroups: typic, intergrade and extragrade. A typic subgroup represents the basic or 'typical' concept of the great group to which the described subgroup belongs. An intergrade subgroup describes the properties that suggest how it grades towards (is similar to) soils of other soil great groups, suborders or orders. These properties are not developed or expressed well enough to cause the soil to be included within the great group towards which they grade, but suggest similarities. Extragrade features are aberrant properties which prevent that soil from being included in another soil classification. About 1,000 soil subgroups are defined in the United States.sfn|Donahue|Miller|Shickluna|1977|p=409}}

A soil family category is a group of soils within a subgroup and describes the physical and chemical properties which affect the response of soil to agricultural management and engineering applications. The principal characteristics used to differentiate soil families include texture, mineralogy, pH, permeability, structure, consistency, the locale's precipitation pattern, and soil temperature. For some soils the criteria also specify the percentage of silt, sand and coarse fragments such as gravel, cobbles and rocks. About 4,500 soil families are recognised in the United States. [7]

A family may contain several soil series which describe the physical location using the name of a prominent physical feature such as a river or town near where the soil sample was taken. An example would be Merrimac for the Merrimack River in New Hampshire. More than 14,000 soil series are recognised in the United States. This permits very specific descriptions of soils. [8]

Example of classification of a soil type

The soil moisture regime, often reflective of climatic factors, is a major determinant of the productivity of terrestrial ecosystems, including agricultural systems. The soil moisture regimes are defined based on the levels of the groundwater table and the amounts of soil water available to plants during a given year in a particular region. Several moisture regime classes are used to characterize soils.

Oxisols are a soil order in USDA soil taxonomy, best known for their occurrence in tropical rain forest, 15–25 degrees north and south of the Equator. In the World Reference Base for Soil Resources (WRB), they belong mainly to the ferralsols, but some are plinthosols or Nitisols. Some oxisols have been previously classified as laterite soils.

Alfisols are a soil order in USDA soil taxonomy. Alfisols form in semi-arid to humid areas, typically under a hardwood forest cover. They have a clay-enriched subsoil and relatively high native fertility. "Alf" refers to aluminium (Al) and iron (Fe). Because of their productivity and abundance, the Alfisols represent one of the more important soil orders for food and fiber production. They are widely used both in agriculture and forestry, and are generally easier to keep fertile than other humid-climate soils, though those in Australia and Africa are still very deficient in nitrogen and available phosphorus. Those in monsoonal tropical regions, however, have a tendency to acidify when heavily cultivated, especially when nitrogenous fertilizers are used.

Mollisols are a soil order in USDA soil taxonomy. Mollisols form in semi-arid to semi-humid areas, typically under a grassland cover. They are most commonly found in the mid-latitudes, namely in North America, mostly east of the Rocky Mountains, in South America in Argentina (Pampas) and Brazil, and in Asia in Mongolia and the Russian Steppes. Their parent material is typically base-rich and calcareous and include limestone, loess, or wind-blown sand. The main processes that lead to the formation of grassland Mollisols are melanisation, decomposition, humification and pedoturbation.

The udic moisture regime is common to soils of humid climates which have well-distributed rainfall, or which have enough rain in summer so that the amount of stored moisture plus rainfall is approximately equal to, or exceeds, the amount of evapotranspiration. Water moves down through the soil at some time in most years.

In both the World Reference Base for Soil Resources (WRB) and the USDA soil taxonomy, a Vertisol is a soil in which there is a high content of expansive clay minerals, many of them known as montmorillonite, that form deep cracks in drier seasons or years. In a phenomenon known as argillipedoturbation, alternate shrinking and swelling causes self-ploughing, where the soil material consistently mixes itself, causing some Vertisols to have an extremely deep A horizon and no B horizon.. This heaving of the underlying material to the surface often creates a microrelief known as gilgai.

In USDA soil taxonomy, a Psamment is defined as an Entisol which consists basically of unconsolidated sand deposits, often found in shifting sand dunes but also in areas of very coarse-textured parent material subject to millions of years of weathering. This latter case is characteristic of the Guiana Highlands of northern South America. A Psamment has no distinct soil horizons, and must consist entirely of material of loamy sand or coarser in texture. In the World Reference Base for Soil Resources (WRB), Psamments are known as Arenosols.

In USDA soil taxonomy, Entisols are defined as soils that do not show any profile development other than an A horizon. An entisol has no diagnostic horizons, and most are basically unaltered from their parent material, which can be unconsolidated sediment or rock. Entisols are the second most abundant soil order, occupying about 16% of the global ice-free land area.

This is an index of articles relating to soil.

An Acrisol is a Reference Soil Group of the World Reference Base for Soil Resources (WRB). It has a clay-rich subsoil and is associated with humid, tropical climates, such as those found in Brazil, and often supports forested areas. In the USDA soil taxonomy, Acrisols correspond to the Humult, Udult and Ustult suborders of the Ultisols and also to Oxisols with a kandic horizon and to some Alfisols. The Acrisols low fertility and toxic amounts of aluminium pose limitations to its agricultural use, favouring in many places its use for silviculture, low intensity pasture and protected areas. Crops that can be successfully cultivated, if climate allows, include tea, rubber tree, oil palm, coffee and sugar cane.

Paleopedology is the discipline that studies soils of past geological eras, from quite recent (Quaternary) to the earliest periods of the Earth's history. Paleopedology can be seen either as a branch of soil science (pedology) or of paleontology, since the methods it uses are in many ways a well-defined combination of the two disciplines.

A Gley is a wetland soil that, unless drained, is saturated with groundwater for long enough periods to develop a characteristic gleyic colour pattern. This pattern is essentially made up of reddish, brownish, or yellowish colours at surfaces of soil particles and/or in the upper soil horizons mixed with greyish/blueish colours inside the peds and/or deeper in the soil. Gleysols are also known as Gleyzems, meadow soils, Aqu-suborders of Entisols, Inceptisols and Mollisols, or as groundwater soils and hydro-morphic soils.

Inceptisols are a soil order in USDA soil taxonomy. They form quickly through alteration of parent material. They are more developed than Entisols. They have no accumulation of clays, iron oxide, aluminium oxide or organic matter. They have an ochric or umbric horizon and a cambic subsurface horizon.

Ustochrepts are a great group of soils, in the USDA soil taxonomy. They are classed in the sub-order Ochrepts, in the order Inceptisols

Haplocambids is a soil Taxonomy great group. Soil with 0-5 slopes over 5 °C temperature and loam soil structure is Haplocambids. Almost cold condition and high altitude soil classified into this group. These soil types are the most commonly occurring of the Cambids. The soils are characterized by minimal horizon expression. Most Haplocambids have a redistribution of carbonates below the cambic horizon. The amount of carbonates, however, is insufficient to meet the definition of a calcic horizon, or the upper boundary is more than 100 cm below the soil surface. These soils occur on a variety of landscapes, commonly on those that are younger than late Pleistocene in age. Haplocambids are divided into 22 suborders.

A Nitisol in the World Reference Base for Soil Resources (WRB) is a deep, red, well-drained soil with a clay content of more than 30% and a blocky structure. Nitisols correlate with the Kandic Alfisols, Ultisols and Inceptisols of the USDA soil taxonomy. 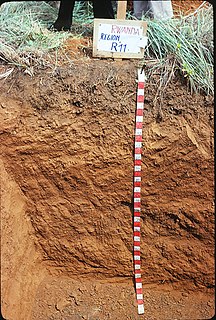 The Polish Soil Classification is a soil classification system used to describe, classify and organize the knowledge about soils in Poland.