This is a list of U.S. state soils. A state soil is a soil that has special significance to a particular state. Each state in the United States has selected a state soil, twenty of which have been legislatively established. These official state soils share the same level of distinction as official state flowers and birds. Also, representative soils have been selected for Puerto Rico and the U.S. Virgin Islands. [1] 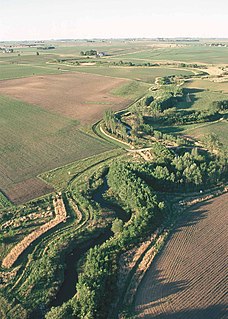 Agricultural wastewater treatment is a farm management agenda for controlling pollution from surface runoff that may be contaminated by chemicals in fertiliser, pesticides, animal slurry, crop residues or irrigation water.

SNOTEL is an automated system of snowpack and related climate sensors operated by the Natural Resources Conservation Service (NRCS) of the United States Department of Agriculture in the Western United States.

The National Cooperative Soil Survey Program (NCSS) in the United States is a nationwide partnership of federal, regional, state, and local agencies and institutions. This partnership works together to cooperatively investigate, inventory, document, classify, and interpret soils and to disseminate, publish, and promote the use of information about the soils of the United States and its trust territories. The activities of the NCSS are carried out on national, regional, and state levels.

Orovada series soil is the official state soil of Nevada. The soil series has an extent of 367,853 acres (148,865 ha), primarily in northern and central Nevada, and extending into southern Idaho and Oregon. They are common soils on semiarid rangeland with sagebrush-grassland plant communities. Orovada soils are arable, able to be cultivated, when irrigated and are considered prime farmland. Alfalfa for hay and seed, winter wheat, barley, and grasses for hay and pasture are the principal crops grown on these soils. 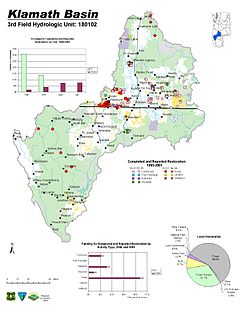 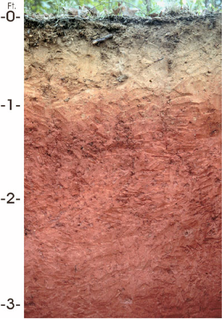 Bama is the official state soil of Alabama.

Packera glabella is one of several plants with the common name butterweed, this one has also been called cressleaf groundsel and yellowtop. It is native to central and southeastern North America.

A buffer strip is an area of land maintained in permanent vegetation that helps to control air, soil, and water quality, along with other environmental problems, dealing primarily on land that is used in agriculture. Buffer strips trap sediment, and enhance filtration of nutrients and pesticides by slowing down runoff that could enter the local surface waters. The root systems of the planted vegetation in these buffers hold soil particles together which alleviate the soil of wind erosion and stabilize stream banks providing protection against substantial erosion and landslides. Farmers can also use buffer strips to square up existing crop fields to provide safety for equipment while also farming more efficiently. 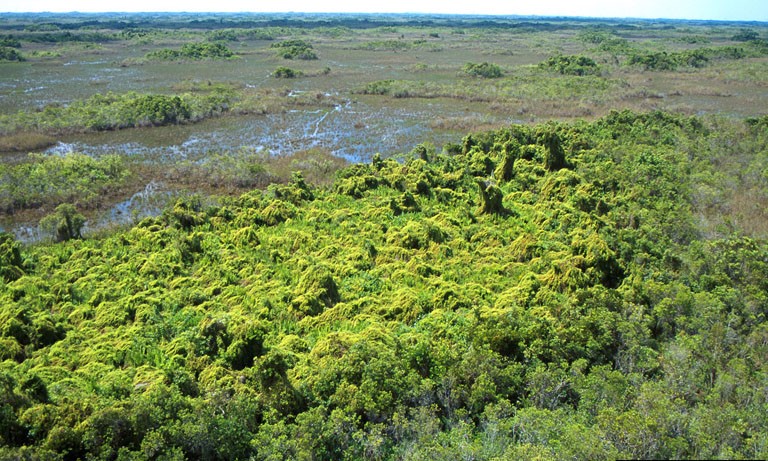 The Conservation Effects Assessment Project (CEAP) was established in 2002 to quantify the environmental impact of the United States Department of Agriculture's (USDA) conservation program. The project focuses on how watersheds are affected. CEAP monitored 14 benchmark watershed sites. The CEAP's vision is to enhance "natural resources and healthier ecosystems through improved conservation effectiveness and better management of agricultural landscapes. The goal is "to improve efficacy of conservations practices and programs by quantifying conservation effects and providing the science and education base needed to enrich conservation planning, implementation, management decisions, and policy."

The Conservation Security Program (CSP) was a voluntary conservation program in the United States that supported stewardship of private agricultural lands by providing payments and technical assistance for maintaining and enhancing natural resources. The program promoted the conservation and improvement of soil, water, air, energy, plant and animal life, and other conservation purposes. Congress established the CSP under the Farm Security and Rural Investment Act of 2002 (FSRIA), which amended the Food Security Act of 1985. The program was administered by the Natural Resources Conservation Service (NRCS), an agency of the United States Department of Agriculture (USDA).

The Jory series consists of very deep, well-drained soils that formed in colluvium derived from basic igneous rock. These soils are in the foothills surrounding the Willamette Valley of the United States. They have been mapped on more than 300,000 acres (1,200 km2) in western Oregon. They are named after Jory Hill, Marion County, Oregon, which itself is named for the Jory family, who settled in the area in 1852, after traveling along the Oregon Trail.

The economy of the U.S. state of Oregon is made up of a number of sectors. During the 1990s and 2000s, Oregon has attempted to transition its economy from one based on natural resources to one based on a mix of manufacturing, services, and high technology.

Sloanea berteroana is a tree of the Caribbean region. The name is often misspelled as Sloanea berteriana. Its vernacular names include montillo and bullwood. It is native to Puerto Rico. This tree is common in the Toro Negro State Forest.

McGregor is an unincorporated community in Redbank Township, Armstrong County, Pennsylvania, United States. The community lies along PA-839 at the junction with Porter Rd.