List of U.S. states by date of admission to the Union

States are the primary subdivisions of the United States. They possess all powers not granted to the federal government, nor prohibited to them by the United States Constitution. In general, state governments have the power to regulate issues of local concern, such as: regulating intrastate commerce, running elections, creating local governments, public school policy, and non-federal road construction and maintenance. Each state has its own constitution grounded in republican principles, and government consisting of executive, legislative, and judicial branches. [2]

All states and their residents are represented in the federal Congress, a bicameral legislature consisting of the Senate and the House of Representatives. Each state is represented by two Senators, and at least one Representative, while the size of a state's House delegation depends on its total population, as determined by the most recent constitutionally-mandated decennial census. [3] Additionally, each state is entitled to select a number of electors to vote in the Electoral College, the body that elects the President of the United States, equal to the total of Representatives and Senators in Congress from that state. [4]

Article IV, Section 3, Clause 1 of the Constitution grants to Congress the authority to admit new states into the Union. Since the establishment of the United States in 1776, the number of states has expanded from the original 13 to 50. Each new state has been admitted on an equal footing with the existing states. [5]

The following table is a list of all 50 states and their respective dates of statehood. The first 13 became states in July 1776 upon agreeing to the United States Declaration of Independence, and each joined the first Union of states between 1777 and 1781, upon ratifying the Articles of Confederation, its first constitution. [6] (A separate table is included below showing AoC ratification dates.) These states are presented in the order in which each ratified the 1787 Constitution, thus joining the present federal Union of states. The date of admission listed for each subsequent state is the official date set by Act of Congress. [lower-alpha 1]

The Twenty-third Amendment to the United States Constitution extends the right to vote in presidential elections to citizens residing in the District of Columbia. The amendment grants the district electors in the Electoral College as though it were a state, though the district can never have more electors than the least-populous state. The Twenty-third Amendment was proposed by the 86th Congress on June 16, 1960, and was ratified by the requisite number of states on March 29, 1961.

The 1st United States Congress, consisting of the United States Senate and the United States House of Representatives, met from March 4, 1789, to March 4, 1791, during the first two years of George Washington's presidency, first at Federal Hall in New York City and later at Congress Hall in Philadelphia. With the initial meeting of the First Congress, the United States federal government officially began operations under the new frame of government established by the 1787 Constitution. The apportionment of seats in the House of Representatives was based on the provisions of Article I, Section 2, Clause 3 of the Constitution. Both chambers had a Pro-Administration majority. Twelve articles of amendment to the Constitution were passed by this Congress and sent to the states for ratification; the ten ratified as additions to the Constitution on December 15, 1791, are collectively known as the Bill of Rights. 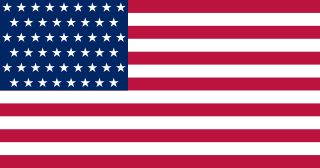 The Enabling Act of 1802 was passed on April 30, 1802 by the Seventh Congress of the United States. This act authorized the residents of the eastern portion of the Northwest Territory to form the state of Ohio and join the U.S. on an equal footing with the other states. To accomplish this, and in doing so, the act also established the precedent and procedures for creation of future states in the western territories. The Enabling Act of 1802 would be the first appropriation by Congress for internal improvements in the country's interior.

The State of Sequoyah was a proposed state to be established from the Indian Territory in the eastern part of present-day Oklahoma. In 1905, with the end of tribal governments looming, Native Americans of the Five Civilized Tribes—the Cherokee, Choctaw, Chickasaw, Creek (Muscogee), and Seminole—in Indian Territory proposed to create a state as a means to retain control of their lands. Their intention was to have a state under Native American constitution and governance. The proposed state was to be named in honor of Sequoyah, the Cherokee who created a writing system in 1825 for the Cherokee language.

The Constitution of the State of Montana is the primary legal document providing for the self-governance of the U.S. State of Montana. It establishes and defines the powers of the three branches of the government of Montana, and the rights of its citizens. Its provisions are sovereign within the state, subject only to the limits imposed by the federal laws and constitution of the United States. The current Montana Constitution was adopted in 1972 and is the second enacted in the state's history.

In the context of the United States, secession primarily refers to the voluntary withdrawal of one or more states from the Union that constitutes the United States; but may loosely refer to leaving a state or territory to form a separate territory or new state, or to the severing of an area from a city or county within a state. Advocates for secession are called disunionists by their contemporaries in various historical documents.

The Enabling Act of 1906, in its first part, empowered the people residing in Indian Territory and Oklahoma Territory to elect delegates to a state constitutional convention and subsequently to be admitted to the union as a single union.