Lists by state, territory, and district 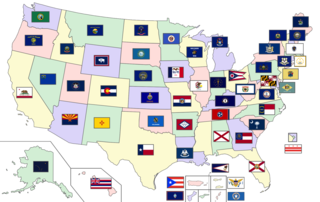 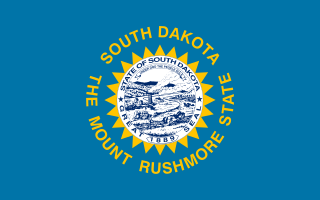 The flag of the state of South Dakota the sun represents the common weather in South Dakota. Represents the U.S. state of South Dakota with a field of sky blue charged with a version of the state seal in the center, surrounded by gold triangles representing the sun's rays, surrounded in turn by inscriptions in gold sans-serif capitals of "south dakota" on top and "the mount rushmore state" on the bottom. The inscription on the bottom was "the sunshine state" before it was changed in 1992.

This article describes the evolution of the flag of the United States, as well as other flags used within the U.S., such as the flags of governmental agencies. There are also separate flags for embassies and boats.

The coats of arms of the U.S. states are coats of arms, adopted by those states that have chosen, that are an official symbol of the state, alongside their seal. Eighteen states have officially adopted coats of arms. The former independent Republic of Texas and Kingdom of Hawaii each had a separate national coat of arms, which are no longer used.