Last updated January 07, 2021
Roads where either unused/no longer used, or closed due to some reasons

An unused highway is a highway or highway ramp that was partially or fully constructed, but went unused or was later closed. An unused roadway or ramp may often be referred to as an abandoned road, ghost road, highway to nowhere, stub ramp, ghost ramp, ski jump, stub street, stub-out, or simply stub. [2]

Some examples of reasons for unused highways include:

Interstate 45 (I-45) is an Interstate Highway located entirely within the U.S. state of Texas. While most Interstate routes ending in "5" are cross-country north-south routes, I-45 is comparatively short, with the entire route located in Texas. It connects the cities of Dallas and Houston, continuing southeast from Houston to Galveston over the Galveston Causeway to the Gulf of Mexico.

Interstate 66 (I-66) is an Interstate Highway in the eastern United States. As indicated by its even route number, it runs in an east–west direction. Its western terminus is near Middletown, Virginia, at an interchange with I-81; its eastern terminus is in Washington, D.C., at an interchange with U.S. Route 29. Much of the route parallels U.S. Route 29 or Virginia State Route 55. Interstate 66 has no physical or historical connection to the famous U.S. Route 66 which was located in a different region of the United States.

Route 124 is a state highway in the northern part of New Jersey in the United States that is 14.74 mi (23.72 km) long. It is the eastern section of what used to be Route 24 before that road was realigned to its current freeway alignment. The western end is at an intersection with U.S. Route 202 (US 202) and County Route 510 (CR 510) in Morristown, Morris County; the eastern end continues as CR 603 on Springfield Avenue at the border between Maplewood and Irvington in Essex County. The route runs through suburban areas of Morris County, passing through Madison and Chatham. It interchanges with Route 24 on the border of Millburn, Essex County and Summit, Union County and serves as a frontage road for that route. Upon splitting from Route 24, Route 124 continues east through Springfield Township, Union Township, and Maplewood to its eastern terminus.

Interstate 278 (I-278) is an auxiliary Interstate Highway in New Jersey and New York in the United States. The road runs 35.62 miles (57.32 km) from U.S. Route 1/9 (US 1/9) in Linden, New Jersey, to the Bruckner Interchange in the New York City borough of the Bronx. The majority of I-278 is in New York City, where it serves as a partial beltway and passes through all five of the city's boroughs. I-278 follows several freeways, including the Union Freeway in Union County, New Jersey; the Staten Island Expressway (SIE) across Staten Island; the Gowanus Expressway in southern Brooklyn; the Brooklyn–Queens Expressway (BQE) across northern Brooklyn and Queens; a small part of the Grand Central Parkway in Queens; and a part of the Bruckner Expressway in the Bronx. I-278 also crosses multiple bridges, including the Goethals, Verrazzano-Narrows, Kosciuszko, and Triborough Bridges.

A bridge to nowhere is a bridge where one or both ends are broken, incomplete, or unconnected to any roads. If it is an overpass or an interchange, the term overpass to nowhere or interchange to nowhere may be used, respectively. There are four main origins for these bridges:

Interstate 695 (I-695) is a 51.46-mile-long (82.82 km) full beltway Interstate Highway extending around Baltimore, Maryland, United States. I-695 is officially designated the McKeldin Beltway, but is colloquially referred to as either the Baltimore Beltway or 695. The route is an auxiliary route of I-95, intersecting that route southwest of Baltimore near Arbutus and northeast of the city near White Marsh. It also intersects other major roads radiating from the Baltimore area, including I-97 near Glen Burnie, the Baltimore–Washington Parkway near Linthicum, I-70 near Woodlawn, I-795 near Pikesville, and I-83 in the Timonium area. The 19.37-mile (31.17 km) portion of the Baltimore Beltway between I-95 northeast of Baltimore and I-97 south of Baltimore is officially Maryland Route 695 (MD 695), and is not part of the Interstate Highway System, but is signed as I-695. This section of the route includes the Francis Scott Key Bridge that crosses over the Patapsco River. The bridge and its approaches are maintained by the Maryland Transportation Authority (MDTA) while the remainder of the Baltimore Beltway is maintained by the Maryland State Highway Administration (MDSHA).

Interstate 280 (I-280) is a 17.85-mile (28.73 km) Interstate Highway in the U.S. state of New Jersey. It provides a spur from I-80 in Parsippany-Troy Hills, Morris County to Newark, and I-95 in Kearny, Hudson County. In Kearny, access is provided toward the Holland Tunnel and Lincoln Tunnel to New York City. The western part of the route runs through suburban areas of Morris and Essex counties, crossing the Watchung Mountains. Upon reaching The Oranges, the setting becomes more urbanized and I-280 runs along a depressed alignment before ascending again in Newark. I-280 includes a lift bridge, the William A. Stickel Memorial Bridge over the Passaic River between Newark and East Newark/Harrison. The highway is sometimes called the Essex Freeway. I-280 interchanges with several roads, including the Garden State Parkway in East Orange and Route 21 in Newark.

Interstate 80 (I-80) is a major Interstate Highway in the United States, running from San Francisco, California eastward to the New York City Metropolitan Area. In New Jersey, I-80 runs for 68.54 miles (110.30 km) from the Delaware Water Gap Toll Bridge at the Pennsylvania state line to its eastern terminus at I-95 in Teaneck, Bergen County. I-95 continues from the end of I-80 to the George Washington Bridge for access to New York City. The highway runs parallel to U.S. Route 46 (US 46) through rural areas of Warren and Sussex counties before heading into more suburban surroundings in Morris County. As the road continues into Passaic and Bergen counties, it heads into more urban areas. The New Jersey Department of Transportation (NJDOT) identifies I-80 within the state as the Christopher Columbus Highway.

Interstate 78 (I-78) is an east–west route stretching from Union Township, Lebanon County, Pennsylvania to New York City. In New Jersey, I-78 is called the Phillipsburg–Newark Expressway and the Newark Bay Extension of the New Jersey Turnpike. The highway runs for 67.83 miles (109.16 km) in the northern part of the state of New Jersey from the Interstate 78 Toll Bridge over the Delaware River at the Pennsylvania state line in Phillipsburg, Warren County east to the Holland Tunnel under the Hudson River at the New York state line in Jersey City, Hudson County. The Phillipsburg-Newark Expressway portion of I-78, formally called the Lightning Division Memorial Highway, runs from the Phillipsburg area east across rural areas of western New Jersey before entering suburban areas in Somerset County. The road crosses the Watchung Mountains, widening into a local-express lane configuration at Route 24 as it continues through urban areas to Newark. Here, I-78 intersects the mainline of the New Jersey Turnpike (I-95) and becomes the Newark Bay Extension, crossing the Newark Bay Bridge and continuing to Jersey City. The route, along with Route 139, follows a one-way pair of surface streets to the Holland Tunnel.

Interstate 35E (I-35E) is an Interstate Highway in the US state of Minnesota, passing through downtown Saint Paul. It is one of two through routes for Interstate 35 through the Twin Cities of Minneapolis and Saint Paul, the other being Interstate 35W through Minneapolis. Thus, both ends of I-35E are shared with I-35W and I-35. This is one of two pairs of suffixed Interstates that has not been eliminated; I-35 also splits into I-35E and I-35W in Dallas-Fort Worth, Texas.

Interstate 95 (I-95) in Maryland is a major highway that runs 109.01 miles (175.43 km) diagonally from northeast to southwest, from Maryland's border with Delaware, to the Woodrow Wilson Bridge, entering the District of Columbia and reaching Virginia. The route is one of the most traveled Interstate Highways in Maryland, especially between Baltimore and Washington, D.C., despite alternate routes along the corridor, such as the Baltimore-Washington Parkway, U.S. Route 1, and U.S. Route 29. Portions of the highway, including the Fort McHenry Tunnel, are tolled. 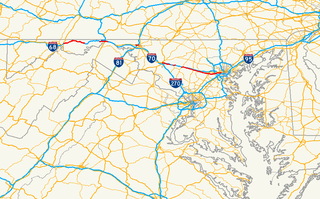 Maryland Route 144 is a collection of state highways in the U.S. state of Maryland. These highways are sections of old alignment of U.S. Route 40 between Cumberland and Baltimore. Along with US 40 Scenic, US 40 Alternate, and a few sections of county-maintained highway, MD 144 is assigned to what was once the main highway between the two cities, connecting those endpoints with Hancock, Hagerstown, Frederick, New Market, Mount Airy, Ellicott City, and Catonsville. MD 144 has seven disjoint sections of mainline highway that pass through mountainous areas of Allegany and Washington counties and the rolling Piedmont of Frederick, Carroll, Howard, and Baltimore counties. 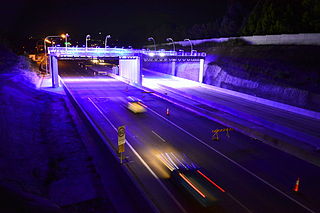 The Hills Motorway is a tollway in north-western Sydney, Australia, owned by toll road operator Transurban. It forms majority of Sydney's M2 route and part of the 110 km Sydney Orbital Network, with Lane Cove Tunnel constituting the rest of the M2 route. The M2 is also part of the National Highway west of Pennant Hills Road. It was known as the North West Transport Link during planning in the early 1990s.

Pennsylvania Route 378 (PA 378) is a north-to-south road in Lehigh and Northampton counties in the Lehigh Valley region of the U.S. state of Pennsylvania. The southern terminus is at PA 309 in Center Valley. Its northern terminus is at U.S. Route 22 (US 22) in Bethlehem. The route heads north from PA 309 as a two-lane undivided road through Upper Saucon Township and Lower Saucon Township before crossing South Mountain into the city of Bethlehem. Here, PA 378 follows city streets through Bethlehem's South Side, intersecting the northern terminus of PA 412. The route crosses the Lehigh River and becomes a four-lane freeway that continues north to US 22. PA 378 is the only highway from US 22 to Center City Bethlehem, and a quick route for visitors traveling to the Wind Creek Bethlehem casino resort on the city's South Side.

Interstate 95 (I-95) is an Interstate highway running from Miami, Florida, north to Houlton, Maine. In the U.S. state of Pennsylvania, it runs 44.25 miles (71.21 km) from the Delaware state line near Marcus Hook to the Delaware River–Turnpike Toll Bridge at the New Jersey state line near Bristol. From the Delaware state line to exit 40, the route is known by many as the Delaware Expressway, but is officially named the Vietnam Veterans Memorial Highway. North(east) of exit 40, I-95 runs along the easternmost portion of the Pennsylvania Turnpike. I-95 parallels its namesake Delaware River for its entire route through the city of Philadelphia and its suburbs. It is a major route through the city and the metropolitan Delaware Valley, providing access to locally important landmarks such as Subaru Park, Philadelphia International Airport, the South Philadelphia Sports Complex, Penn's Landing, and Philadelphia Mills. 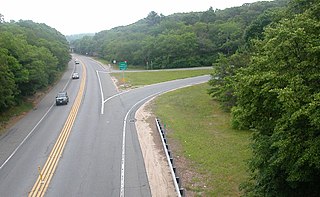 A two-lane expressway or two-lane freeway is an expressway or freeway with only one lane in each direction, and usually no median barrier. It may be built that way because of constraints, or may be intended for expansion once traffic volumes rise. The term super two is often used by roadgeeks for this type of road, but traffic engineers use that term for a high-quality surface road. Most of these roads are not tolled. 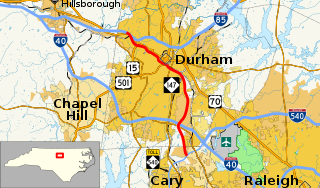 North Carolina Highway 147 (NC 147) is a North Carolina state highway. The route is a 15.7-mile-long (25.3 km) freeway that connects the Research Triangle Park (RTP) to both Western Wake County and the city of Durham. The section north of Interstate 40 (I-40) is known as the Durham Freeway, while the section south of I-40 is part of the Triangle Expressway.

New York State Route 135 (NY 135) is a 10.66-mile (17.16 km) state highway in eastern Nassau County, New York, in the United States. The route is a limited-access highway that connects Seaford with Syosset. The highway runs from Merrick Road in Seaford to NY 25 in Syosset. In between, NY 135 passes through Bethpage and Plainview and serves Bethpage State Park. The highway is ceremoniously designated as the Ralph J. Marino Expressway; however, it is more commonly known as the Seaford–Oyster Bay Expressway.