Grade separation is a method of aligning a junction of two or more surface transport axes at different heights (grades) so that they will not disrupt the traffic flow on other transit routes when they cross each other. The composition of such transport axes does not have to be uniform; it can consist of a mixture of roads, footpaths, railways, canals, or airport runways. Bridges, tunnels, or a combination of both can be built at a junction to achieve the needed grade separation.

An intersection is an at-grade junction where two or more roads or streets meet or cross. Intersections may be classified by number of road segments, traffic controls, and/or lane design.

Road enthusiasts sometimes use the terms volleyball interchange or split-level diamond interchange to refer to these interchanges. [2]

A roadgeek is an individual involved in "roadgeeking" or "road enthusiasm"—an interest in roads, and especially going on road trips, as a hobby. A person with such an interest is also referred to as a road enthusiast, road buff, roadfan or Roads Scholar, the latter being a play on the term Rhodes Scholar.

In a three-level diamond interchange, the two main roads are on separate levels, and on a third level, usually in the middle, there is a square of one-way roads. The square circulates clockwise where traffic drives on the left, or anticlockwise where it drives on the right. At each corner of the square is the terminal of an exit ramp from one main road and an entrance ramp to the other main road.

Traffic transferring from one road to the other to make an overall right turn only passes through one corner of the square, at which point a right turn is made. Transfer traffic making an overall left turn must proceed straight through the first intersection it encounters, turn left at the next, and then proceed straight through a third intersection to enter the other main roadway.

Its two-level variant is the split diamond interchange.

Its at-grade variant is the town center intersection (TCI).

Many examples of this interchange type can also be found in Texas; however, the interchanges almost always include the frontage roads as well. If the traffic amounts increase, the interchange is usually converted into a stack interchange, also as the second level of the High Five Interchange.

A frontage road is a local road running parallel to a higher-speed, limited-access road. A frontage road is often used to provide access to private driveways, shops, houses, industries or farms. Where parallel high-speed roads are provided as part of a major highway, these are also known as local-express lanes. 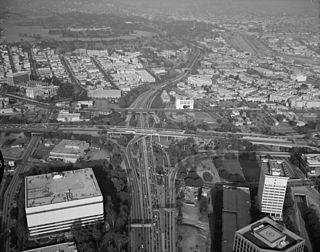 A stack interchange, or colloquially butterfly junction, is a particular, free-flowing type of design for interchanges, meaning grade-separated road junctions. It is referred to as a directional interchange in the American Association of State Highway and Transportation Officials Policy on Geometric Design of Highways and Streets.

The High Five Interchange is one of the first five-level stack interchanges built in Dallas, Texas. Located at the junction of the Lyndon B. Johnson Freeway and the Central Expressway, it replaces an antiquated partial cloverleaf interchange constructed in the 1960s.

An overpass is a bridge, road, railway or similar structure that crosses over another road or railway. An overpass and underpass together form a grade separation. Stack interchanges are made up of many overpasses. 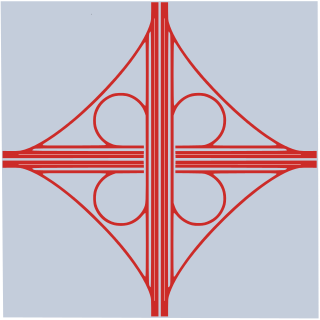 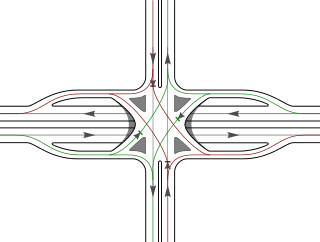 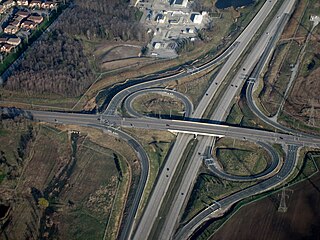 Interstate 380 (I-380) is a 73-mile (117 km) auxiliary Interstate Highway in eastern Iowa. The route extends from Interstate 80 near Coralville to Waterloo. I-380 connects the cities of Cedar Rapids and Waterloo, the state's second- and sixth-largest cities, respectively, to the Interstate Highway System. Except for its last 1 1⁄2 miles (2.4 km) north of U.S. Route 20 (US 20), I-380 runs concurrently with Iowa Highway 27 (Iowa 27), which represents Iowa's portion of the 560-mile (900 km) Avenue of the Saints highway connecting St. Louis, Missouri, with St. Paul, Minnesota.

Interstate 74 (I-74) is the central freeway through the Iowa Quad Cities. It roughly divides Davenport to the west and Bettendorf to the east. The Interstate Highway begins at an interchange with Interstate 80 (I-80) at the northeastern edge of Davenport and continues into Illinois at the Mississippi River by crossing the I-74 Bridge. The freeway was built in stages during the late 1960s and early 1970s.

Road signs in Indonesia are standardised road signs similar to those used in other nations but with certain distinctions. As a former Dutch colony, until the 1970s road signs in Indonesia closely followed The Netherlands rules on road signs. Nowadays Indonesian road sign design are a mix of Dutch, German, The American MUTCD, New Zealand, and Japanese road sign features. According to the 2014 Minister of Transportation's Regulation No. 13 concerning Traffic Signs, the official typeface for road signs in Indonesia is Clearview. Indonesia formerly used FHWA Series fonts as the designated typeface though the rules are not being implemented properly. 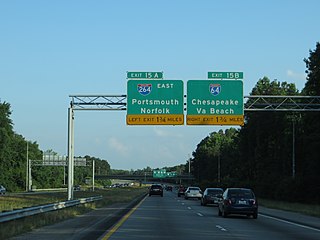 The Bowers Hill interchange is a large interchange complex where the Hampton Roads Beltway intersects with Interstate 264 (I-264) as well as Military Highway, which carries the three U.S. Highways. It is named for the unincorporated community surrounding it, Bowers Hill, Virginia, which itself is a part of the independent city of Chesapeake.