There are many classes of roads in Canada . The only inter-provincial systems are the Trans-Canada Highway and National Highway System. [1] 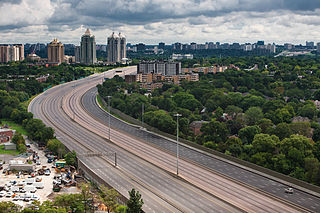 The Trans-Canada Highway is a transcontinental federal-provincial highway system that travels through all ten provinces of Canada from the Pacific Ocean on the west to the Atlantic on the east. The main route spans 7,821 km (4,860 mi) across the country, one of the longest routes of its type in the world. The highway system is recognizable by its distinctive white-on-green maple leaf route markers, although there are small variations in the markers in some provinces.

Transportation in Canada, the world's second-largest country in total area, is dedicated to having an efficient, high-capacity multimodal transport spanning often vast distances between natural resource extraction sites, agricultural and urban areas. Canada's transportation system includes more than 1,400,000 kilometres (870,000 mi) of roads, 10 major international airports, 300 smaller airports, 72,093 km (44,797 mi) of functioning railway track, and more than 300 commercial ports and harbours that provide access to the Pacific, Atlantic and Arctic oceans as well as the Great Lakes and the St. Lawrence Seaway. In 2005, the transportation sector made up 4.2% of Canada's GDP, compared to 3.7% for Canada's mining and oil and gas extraction industries. 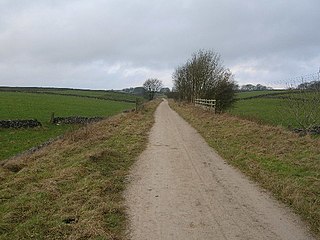 A highway is any public or private road or other public way on land. It is used for major roads, but also includes other public roads and public tracks: It is not an equivalent term to controlled-access highway, or a translation for autobahn, autoroute, etc.

The National Highway is a system of roads connecting all mainland states and territories of Australia, and is the major network of highways and motorways connecting Australia's capital cities and major regional centres.

King's Highway 401, commonly referred to as Highway 401 and also known by its official name as the Macdonald–Cartier Freeway or colloquially as the four-oh-one, is a controlled-access 400-series highway in the Canadian province of Ontario. It stretches 828 kilometres (514 mi) from Windsor in the west to the Ontario–Quebec border in the east. The part of Highway 401 that passes through Toronto is North America's busiest highway, and one of the widest. Together with Quebec Autoroute 20, it forms the road transportation backbone of the Quebec City–Windsor Corridor, along which over half of Canada's population resides and is also a Core Route in the National Highway System of Canada. The route is maintained by the Ministry of Transportation of Ontario (MTO) and patrolled by the Ontario Provincial Police. The speed limit is 100 km/h (62 mph) throughout its length, with the only exceptions the posted 80 km/h (50 mph) limit westbound in Windsor and in most construction zones. 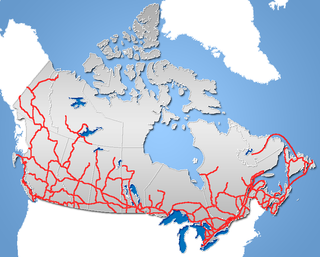 London Streets is an arm of Transport for London (TfL) which is responsible for managing the main through-routes in London, a total network of 580 kilometres (360 mi) of roads. These are also known as red routes, or the Transport for London Road Network (TLRN), as they can be identified by their red road markings and signage.

A roadgeek is an individual involved in "roadgeeking" or "road enthusiasm"—an interest in roads, and especially going on road trips, as a hobby. A person with such an interest is also referred to as a road enthusiast, road buff, roadfan or Roads Scholar, the latter being a play on the term Rhodes Scholar.

Alberta Provincial Highway No. 16, commonly referred to as Highway 16, is a major east–west highway in central Alberta, Canada, connecting Jasper to Lloydminster via Edmonton. It forms a portion of the Yellowhead Highway, a major interprovincial route of the Trans-Canada Highway system that stretches from Masset, British Columbia to Portage la Prairie, Manitoba, near Winnipeg. Highway 16 spans approximately 634 km (394 mi) from Alberta's border with British Columbia in the west to its border with Saskatchewan in the east. As of 2010, all but less than 96 km (60 mi) of the route was divided, with a minimum of two lanes in each direction. It is designated a core route in Canada's National Highway System.

Highway 1 is the Saskatchewan section of the Trans-Canada Highway mainland route. The total distance of the Trans-Canada Highway in Saskatchewan is 647.9 kilometres (402.6 mi). The highway traverses Saskatchewan from the western border with Alberta, from Highway 1, to the Manitoba border where it continues as PTH 1. The Trans–Canada Highway Act was passed on December 10, 1949. The Saskatchewan segment was completed August 21, 1957. The speed limit along the majority of the route is 110 kilometres per hour (70–mph) with urban area thoroughfares slowing to a speed of 90–100 kilometres per hour (55–65 mph). Portions of the highway—the section through Swift Current, an 8-kilometer section east of Moose Jaw, and the Regina Ring Road—are controlled-access. Highway 1 serves as a major east-west transport route for commercial traffic. It is the main link between southern Saskatchewan's largest cities, and also serves as the province's main link to the neighbouring provinces of Alberta and Manitoba.

Highway 39 is a provincial, paved, undivided highway located in the southern portion of the Canadian province of Saskatchewan connecting North Portal and Moose Jaw in the north. This is a primary Saskatchewan highway maintained by the provincial and national governments and providing a major trucking and tourism route between the United States via Portal, Burke County, North Dakota, and North Portal, Saskatchewan. On July 3, 2000, Highways and Transportation Minister Maynard Sonntag officiated at the ribbon cutting ceremony opening the new duty-free shop and the twinned highway at Saskatchewan's busiest border crossing. Highway 39 is one of Canada's busiest highways, facilitating transport for $6 billion in trade goods via approximately 100,000 trucks over the year. The entire length of highway 39 is paved. The CanAm Highway comprises Saskatchewan Highways Hwy 35, Hwy 39, Hwy 6, Hwy 3, as well as Hwy 2. 44.3 miles (71.3 km) of Saskatchewan Highway 39 contribute to the CanAm Highway between Weyburn and Corinne. Highway 39 is divided or twinned in two areas at North Portal as well as north of Weyburn for 1.7 kilometres (1.1 mi). The junction of Hwy 39 with the Trans–Canada divided four-lane highway is done via a "Parclo" or partial cloverleaf interchange.

The Ministry of Highways and Infrastructure is divided into the Operations, Policy and Programs, and Corporate Services Divisions and the Communications Branch. The ministry is the employer of over 1,476 employees diversified amongst 105 communities in Saskatchewan. Currently the Honourable Dave Marit, Member of the Legislative Assembly, is Minister of Highways and Infrastructure.

The National Highway System in Canada is a federal designation for a strategic transport network of highways and freeways. The system includes but is not limited to the Trans-Canada Highway, and currently consists of 38,021 kilometres (23,625 mi) of roadway designated under one of three classes: Core Routes, Feeder Routes, and Northern and Remote Routes.

Highways in the United States are split into at least four different types of systems: Interstate Highways, U.S. Highways, state highways, and county highways. Highways are generally organized by a route number or letter. These designations are generally displayed along the route by means of a highway shield. Each system has its own unique shield design that will allow quick identification to which system the route belongs. Below is a list of the different highway shields used throughout the United States.

The réseau routier québécois is managed by the Quebec Ministry of Transportation and consists of about 185,000 kilometres (115,000 mi) of highways and roads. In addition, Quebec has almost 12,000 bridges, tunnels, retaining walls, culverts, and other structures such as the Quebec Bridge, the Pierre Laporte Bridge, the Laviolette Bridge and the Louis-Hippolyte Lafontaine Bridge–Tunnel.