Blood & Honour is a neo-Nazi music promotion network and right-wing extremist political group founded in the United Kingdom by Ian Stuart Donaldson and Nicky Crane in 1987. It is composed of White Nationalists and has links to Combat 18.

Sometimes the code 28 is used to represent Blood & Honour, derived from the second and eighth letters of the Latin alphabet, B and H, and the group uses Nazi symbolism. Its official website self-describes as a "musical based resistance network" and dubs its "global confederacy of freedom fighters" Brotherhood 28.

The roots of Blood & Honour go back to 1977 in the United Kingdom, when the white nationalist National Front (NF) founded the Rock Against Communism (RAC) movement in response to the Anti-Nazi League's Rock Against Racism campaign. By 1980, a new version of Skrewdriver—by then a white power skinhead band—relaunched the RAC movement. Ian Stuart Donaldson, Skrewdriver's singer, was a founder of Blood & Honour and one of its prominent leaders until his death in 1993. Nicky Crane was a co-founder. [1] With the aid of the NF, the White Noise Club (WNC) organised concerts under the RAC name, and the RAC movement grew throughout 1983 and 1984.

In 1986, the NF split into two factions, and around this time, it was discovered that the WNC had been defrauding bands and concert-goers. Several bands left the WNC, including Skrewdriver, No Remorse, Sudden Impact and Brutal Attack. Donaldson decided to break away from the WNC and organise concerts for the NF, so he founded Blood & Honour. By June 1987, with the help of other white power bands, Blood & Honour was launched, along with a magazine of the same name. [2] A concert was held in Morden, Surrey, to commemorate this launch on 5 September, with Skrewdriver, Brutal Attack, Sudden Impact and No Remorse playing to a crowd of 500, including French, Italian and German supporters. [3] [4]

The name was derived from the motto of the Hitler Youth, or HJ, Blut und Ehre, and a song of the same name by the White power band Skrewdriver. [5] and AWB-style triskele. [6]

By the end of 1988, Blood & Honour magazine was a quarterly that had grown from eight to 16 pages after a few issues. The magazine included concert reports, band interviews, readers' letters, RAC record charts and a column called "White Whispers". A mail-order service called Skrewdriver Services soon formed within its pages, selling items such as white power albums, T-shirts and flags; Loyalist music tapes; and Swastika pendants. [3]

The back page of Blood & Honour Issue Number 13 advertised a Skrewdriver concert in London on 12 September 1992. Posters and fliers were posted around the country, advertising the concert and listing a redirection point as Waterloo Rail Station. The night before the concert, Donaldson was attacked in a Burton pub. The next day, police closed down Waterloo Station and the tube station, preventing many people from reaching the redirection point. Hundreds more Blood & Honour supporters who had journeyed from abroad were turned back at ports in Folkestone and Dover. The Blood & Honour supporters clashed with anti-fascist protesters. Missiles such as bricks and champagne bottles taken from bins outside of South Bank restaurants were used during the ensuing riot. Battles ensued for about two hours until the police separated the two groups, and the concert proceeded in the function hall of the Yorkshire Grey pub in Eltham, South-East London. The incident got international media coverage and became known as the "Battle of Waterloo". [4] [7]

In 1992, the newly formed Midlands division organised the annual Blood & Honour White Xmas concert. On 19 December, over 400 supporters gathered at a working men's club in Mansfield to watch No Remorse, Razors Edge and Skrewdriver perform. In 1993, the East Midlands division planned to stage an outdoor festival on 31 July. Donaldson was arrested and served with an injunction order not to perform at the concert. The venue was blockaded by the police, who seized amplifiers and confiscated sound equipment. It was the biggest police operation in the area since the Miners strikes in the early 1980s. [8]

Later that year, the East Midlands division organised a concert for 25 September. Three nights before the concert, Donaldson and a few friends were travelling in a car that spun out of control into a ditch. Donaldson and another passenger died, and other passengers had minor wounds. The following day, 100 Skrewdriver supporters travelled to the Blood & Honour social in the Midlands, unaware of the deaths.[ citation needed ]

Each year, on or near the anniversary of Donaldson's death, a large memorial concert is held. In 2008, a concert in Redhill, Somerset attracted widespread BBC, radio and newspaper coverage. [9] [10] The memorial concert to mark the 20th anniversary of the death of Donaldson reportedly was the biggest associated gig in the UK with between 1,000 and 1,200 people attending. [11] [12] On the 23rd anniversary of the death of founder, Ian Stuart Donaldson, the annual memorial gig once again attracted international television and media coverage. [13] [14] [15] [16]

The group is composed of White Nationalists and has links to Combat 18. [1] Its official website self-describes as a "musical based resistance network" and dubs its "global confederacy of freedom fighters" Brotherhood 28. [17]

Sometimes the code 28 is used to represent Blood & Honour, derived from the second and eighth letters of the Latin alphabet, B and H. Though different national chapters of Blood & Honour use different Nationalist symbols based on their location, common symbolic traits include the usage of a modernised Blackletter script, colours of the Nazi German flag, and other Nazi symbolism, including the Totenkopf Death's Head insignia of the SS-Totenkopfverbände and concentration camp units. [5]

In 1999, some Blood & Honour groups published support on their official websites for the Malexander murders in Sweden.[ citation needed ]

Blood & Honour Australia & the Southern Cross Hammerskins have been organising the annual Ian Donaldson Memorial concert in Melbourne since 1994. Reports by the media that the concert in 2019 was cancelled at the last minute were false, as it went ahead as it does each year without incident. [23] [24] [25] [26]

Ian Stuart Donaldson, also known as Ian Stuart, was an English neo-Nazi musician. He was best known as the front-man of Skrewdriver, an Oi! band which, from 1982 onwards, he rebranded as a Rock Against Communism band. He raised money through nationalist concerts with his Blood & Honour network. 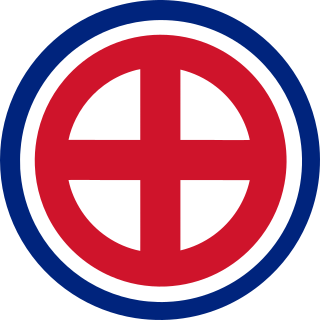 The British Movement (BM), later called the British National Socialist Movement (BNSM), is a British Neo-Nazi organisation founded by Colin Jordan in 1968. It grew out of the National Socialist Movement (NSM), which was founded in 1962. Frequently on the margins of the British far-right, the BM has had a long and chequered history for its association with violence and extremism. It was founded as a political party but manifested itself more as a pressure and activist group. It has had spells of dormancy. 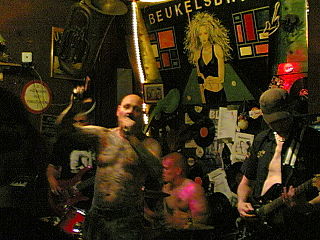 Rock Against Communism (RAC) was the name of white power rock concerts in the United Kingdom in the late 1970s and early 1980s, and has since become the catch-all term for music with racist lyrics as well as a specific genre of rock music derived from Oi!. The lyrics can focus on racism and antisemitism, though this depends on the band.

The Official National Front (ONF) was one of two far-right groups to emerge in the United Kingdom in 1986 following a split within the National Front. Following ideological paths that were mostly new to the British far-right, the ONF stood opposed to the more traditionalist Flag Group.

Nicola Vincenzo "Nicky" Crane was an English neo-Nazi activist. He came out as gay before dying from an AIDS-related illness in 1993.

White power skinheads, also known as racist skinheads and neo-Nazi skinheads, are members of a neo-Nazi, white supremacist and antisemitic offshoot of the skinhead subculture. Many of them are affiliated with white nationalist organizations and some of them are members of prison gangs. The movement emerged in the United Kingdom between the late 1960s and the late 1970s, before spreading across Europe, Russia and North America in the 1980–1990s.

Skullhead was a nationalist Oi! band from the Newcastle area. It was part of the Rock Against Communism (RAC) movement.

Skrewdriver were an English punk rock band formed by Ian Stuart Donaldson in Poulton-le-Fylde, Lancashire, in 1976. Originally a punk band, Skrewdriver changed into a white supremacist rock band after reuniting in the 1980s. Their original line-up split in January 1979 and Donaldson reformed the band with different musicians in 1982.

Mulugeta Seraw was an Ethiopian student who traveled to the United States to attend college. He was 28 when he was murdered by three white supremacists in November 1988 in Portland, Oregon. They were convicted, and Mulugeta's father and son—who was six years old—filed a civil lawsuit against the killers and an affiliated organization, holding them liable for the murder.

The Racial Volunteer Force (RVF) is a violent neo-Nazi splinter group of the British neo-Nazi group Combat 18 (C18) with close ties to the far right paramilitary group, British Freedom Fighters. Although originating as a breakaway group the RVF has since re-established links to C18 whilst maintaining a distinct identity.

Oi! is a subgenre of punk rock that originated in the United Kingdom in the late 1970s. The music and its associated subculture had the goal of bringing together punks, skinheads, and other disaffected working-class youth. The movement was partly a response to the perception that many participants in the early punk rock scene were, in the words of The Business guitarist Steve Kent, "trendy university people using long words, trying to be artistic...and losing touch."

No Remorse were an English neo-Nazi and Rock Against Communism (RAC) band led by singer Paul Bellany, aka Paul Burnley.

Clark Reid Martell is an American white supremacist and the former leader of Chicago Area SkinHeads (CASH), which was founded in 1987 by six skinheads under his leadership. This was the first organized neo-Nazi white power skinhead group in the United States. The group was also called Romantic Violence, and was the first US distributor of records and tapes from the English band Skrewdriver.

White power music is music that promotes white nationalism. It encompasses various music styles, including rock, country, experimental music and folk. Ethnomusicologist Benjamin R. Teitelbaum argues that white power music "can be defined by lyrics that demonize variously conceived non-whites and advocate racial pride and solidarity. Most often, however, insiders conceptualized white power music as the combination of those themes with pounding rhythms and a charging punk or metal-based accompaniment." Genres include Nazi punk, Rock Against Communism, National Socialist black metal, and fashwave. 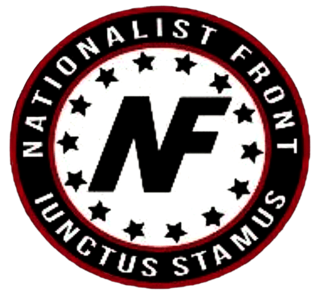 The Nationalist Front is a loose coalition of radical right and white supremacists. The coalition was formed in 2016 by leaders of the neo-Nazi groups National Socialist Movement (NSM) and Traditionalist Worker Party (TWP). Its aim was to unite white supremacist and white nationalist groups under a common umbrella. Originally the group was named the Aryan Nationalist Alliance and was composed of neo-Nazi, Ku Klux Klan and White power skinhead organizations.

"Tomorrow Belongs to Me" is a song from the 1966 Broadway musical Cabaret, and the 1972 film of the same name. It is not a historically authentic song, but instead was written and composed by two Jewish musicians – John Kander and Fred Ebb – as part of an avowedly anti-fascist work; the nationalist character of the song serves as a warning to the musical's characters of the rise of Nazism. Nonetheless, "Tomorrow Belongs to Me" has at times been adopted by right-wing, neo-Nazi, and alt-right groups as an anthem.