The team reached international prominence at the 2003 FIFA Women's World Cup, losing in the bronze medal match to the United States. [2] Canada qualified for its first Olympic women's soccer tournament in 2008, making it to the quarterfinals. [3] Canada are two-time CONCACAF Women's Gold Cup champions, and two-time Olympic bronze medalists from London 2012 where they defeated France 1–0 in Coventry and from Rio de Janeiro 2016, after defeating hosts Brazil 2–1 in São Paulo. [4]

A certain segment of the Canadian women's soccer fans are closely linked to the U-20 team (U-19 prior to 2006), partly due to Canada hosting the inaugural FIFA U-19 Women's World Championship in 2002, a tournament in which the team won silver in front of 47,784 fans at Commonwealth Stadium in Edmonton, Alberta. [5] Canada also hosted the 2015 FIFA Women's World Cup, where they were eliminated in the quarterfinals by England. Canada set the tournament and team record for attendance in the process, with 1,353,506 and 54,027 respectively. [6]

Captain Christine Sinclair has been called the "backbone" of the Canadian national team, earning her 250th cap in 2016, while ranking first worldwide in international goals scored by any player, man or woman. [13] [14] [15] She was named Canada Soccer's female player of the year every year from 2004 to 2014, and has been nominated for FIFA's Women's World Player of the Year. [16] Despite speculation otherwise, she confirmed in 2016 that she plans to compete in the 2019 Women's World Cup and the 2020 Olympics. [13] She also added prior to the 2016 Olympics that "The young players coming into this Olympic squad have brought an energy and passion to our team and they have risen the bar." [17]

The following players were named to a squad in the last twelve months.

The Brazil women's national football team represents Brazil in women's association football and is run by the Brazilian Football Confederation (CBF). It has participated in eight editions of the FIFA Women's World Cup, finishing as runner-up in 2007, and seven editions of the Copa América Femenina.

Christine Margaret Sinclair is a Canadian soccer player and captain of the Canadian national team. She plays professionally for the Portland Thorns FC in the National Women's Soccer League (NWSL) and previously played for FC Gold Pride and Western New York Flash in the Women's Professional Soccer (WPS). A CONCACAF champion, two-time Olympic bronze medalist and 14-time winner of the Canada Soccer Player of the Year award, Sinclair is the world's all-time leader for international goals scored for men or women with 186 goals, and is the most-capped active international footballer with 296 caps. She is also the second footballer of either gender to score at five World Cup editions, preceded by Marta.

Kara Elise Lang is a Canadian soccer player and sports analyst, who represented her country in two FIFA World Cups and the Olympic Games, and played club soccer for Vancouver Whitecaps Women. She is the youngest woman to be named to Canada National Women's Team, making her National Team debut on 1 March 2002 at the Algarve Cup in Portugal at age 15. Lang retired on 5 January 2011 at the age of 24 due to recurring knee and ACL injuries. Lang began a comeback in 2013, with her ambition being to help Canada in the 2015 FIFA Women's World Cup, but suffered a third ACL injury in February 2014, effectively ending her comeback. She now has two sons with professional baseball player Ricky Romero. She was inducted into the Canadian Soccer Hall of Fame as a player in November 2015.

The United States U-20 women's national soccer team is a youth soccer team operated under the auspices of U.S. Soccer. Its primary role is the development of players in preparation for the senior women's national team. The team most recently appeared in the 2018 FIFA U-20 Women's World Cup in France, where they failed to progress from the group stage for the first time in the competition's history. The team competes in a variety of competitions, including the biennial FIFA U-20 Women's World Cup, which is the top competition for this age group.

Diana Beverly Matheson is a Canadian international soccer player. She represents Canada on the Canada women's national soccer team and currently plays for Utah Royals FC in the National Women's Soccer League (NWSL). She previously played for the Washington Spirit in the NWSL and Team Strømmen in the Toppserien, the top division league in Norway. She is best known for scoring the bronze medal-winning goal for Canada in the 92nd minute against France at the 2012 Summer Olympics. She also won a bronze medal at the 2016 Rio Olympics and gold medal at the 2011 Pan American Games with the senior national team. 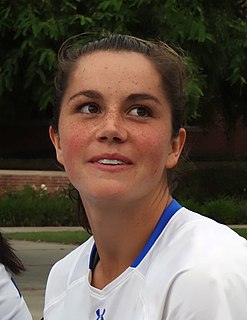 Jessie Alexandra Fleming is a Canadian professional soccer player who plays as a midfielder for Chelsea of the English FA WSL and the Canada women's national soccer team.

Allysha Chapman is a Canadian soccer player. She plays as a defender for the Houston Dash and the Canada women's national soccer team.

Jordyn Pamela Huitema is a Canadian professional footballer who plays as a forward for French Division 1 Féminine club Paris Saint-Germain and the Canada national team.

Julia Angela Grosso is a Canadian soccer player who plays as a midfielder. She plays for the Texas Longhorns in the Big 12 Conference. Grosso also plays for the Canada women's national soccer team.