Freudo-Marxism is a loose designation for philosophies that have been informed by or have attempted to synthesize the works of Karl Marx and the psychoanalytic theory of Sigmund Freud.

The beginnings of Freudo-Marxist theorizing took place in the 1920s in Germany and the Soviet Union. The Soviet philosopher V. Yurinets and the Freudian analyst Siegfried Bernfeld both discussed the topic. The Soviet linguist Valentin Voloshinov, a member of the Bakhtin circle, began a Marxist critique of psychoanalysis in his 1925 article "Beyond the Social", which he developed more substantially in his 1927 book Freudianism: A Marxist Critique. [1] In 1929, Wilhelm Reich’s Dialectical Materialism and Psychoanalysis was published in German and Russian in the bilingual communist theory journal Unter dem Banner des Marxismus. At the end of this line of thought can be considered Otto Fenichel's 1934 article Psychoanalysis as the Nucleus of a Future Dialectical-Materialistic Psychology which appeared in Wilhelm Reich's Zeitschrift für Politische Psychologie und Sexualökonomie (Journal for Political Psychology and Sex-Economy). One member of the Berlin group of Marxist psychoanalysts around Wilhelm Reich was Erich Fromm, who later brought Freudo-Marxist ideas into the exiled Frankfurt School led by Max Horkheimer and Theodor W. Adorno.

Wilhelm Reich [2] [3] [4] [5] was an Austrian psychoanalyst, a member of the second generation of psychoanalysts after Sigmund Freud, and one of the most radical figures in the history of psychiatry. He was the author of several influential books and essays, most notably Character Analysis (1933), The Mass Psychology of Fascism (1933), and The Sexual Revolution (1936). [6] His work on character contributed to the development of Anna Freud's The Ego and the Mechanisms of Defence (1936), and his idea of muscular armour—the expression of the personality in the way the body moves—shaped innovations such as body psychotherapy, Fritz Perls's Gestalt therapy, Alexander Lowen's bioenergetic analysis, and Arthur Janov's primal therapy. His writing influenced generations of intellectuals: during the 1968 student uprisings in Paris and Berlin, students scrawled his name on walls and threw copies of The Mass Psychology of Fascism at the police. [7]

The Frankfurt School, from the Institute for Social Research, took up the task of choosing what parts of Marx's thought might serve to clarify social conditions which Marx himself had never seen. They drew on other schools of thought to fill in Marx's perceived omissions. Max Weber exerted a major influence, as did Sigmund Freud. In the Institute's extensive Studien über Authorität und Familie (ed. Max Horkheimer, Paris 1936), Erich Fromm authored the social-psychological part. Another new member of the institute was Herbert Marcuse, who would become famous during the 1950s in the US.

Eros and Civilization is one of Marcuse's best known early works. Written in 1955, it is an attempted dialectical synthesis of Marx and Freud whose title alludes to Freud's Civilization and its Discontents . Marcuse's vision of a non-repressive society (which runs rather counter to Freud's conception of society as naturally and necessarily repressive), based on Marx and Freud, anticipated the values of 1960s countercultural social movements.

Fromm and The Sane Society

Erich Fromm, once a member of the Frankfurt School, left the group at the end of the 1930s. The culmination of Fromm's social and political philosophy was his book The Sane Society, published in 1955, which argued in favor of humanist, democratic socialism. Building primarily upon the works of Karl Marx, Fromm sought to re-emphasise the ideal of personal freedom, missing from most Soviet Marxism, and more frequently found in the writings of classic liberals. Fromm's brand of socialism rejected both Western capitalism and Soviet communism, which he saw as dehumanizing and bureaucratic social structures that resulted in a virtually universal modern phenomenon of alienation.

Jacques Lacan was a philosophically sophisticated French psychoanalyst, whose perspective came to predominate in French psychiatry and psychology. Lacan saw himself as loyal to and rescuing Freud's legacy. Lacan's influence has created a new cross-fertilisation of Freudian and Marxist ideas.

Louis Althusser is widely known as a theorist of ideology, and his best-known essay is Ideology and Ideological State Apparatuses: Notes Toward an Investigation . The essay establishes the concept of ideology, also based on Gramsci's theory of hegemony. Whereas hegemony is ultimately determined entirely by political forces, ideology draws on Freud's and Lacan's concepts of the unconscious and mirror-phase respectively, and describes the structures and systems that allow us to meaningfully have a concept of the self. These structures, for Althusser, are both agents of repression and inevitable – it is impossible to escape ideology, to not be subjected to it. The distinction between ideology and science or philosophy is not assured once for all by the epistemological break (a term borrowed from Gaston Bachelard): this "break" is not a chronologically-determined event, but a process. Instead of an assured victory, there is a continuous struggle against ideology: "Ideology has no history".

The Slovenian philosopher Slavoj Žižek has developed since the late 1980s a line of thought which uses Lacanian psychoanalysis, Hegelian philosophy and Marxism. Althusser is also among his references. His The Sublime Object of Ideology deals with the original Freudo-Marxist perspective.

Marx's theory of commodity fetishism has proven fertile material for work by other theorists since Marx, who have added to, adapted, or, as Marxist orthodoxy might see it, 'vulgarized' the original concept. Freud's well-known but unrelated theory of sexual fetishism led to new interpretations of commodity fetishism, as types of sexually charged relationships between a person and a manufactured object.

Erich Seligmann Fromm was a German Jew who fled the Nazi regime and settled in the US. He was a social psychologist, psychoanalyst, sociologist, humanistic philosopher, and democratic socialist. He was one of the Founders of The William Alanson White Institute of Psychiatry, Psychoanalysis and Psychology in New York City and was associated with the Frankfurt School of critical theory.

The Neo-Freudian psychiatrists and psychologists were a group of loosely linked American theorists of the mid-twentieth century, who were all influenced by Sigmund Freud, but who extended his theories, often in social or cultural directions. They have been defined as "American writers who attempted to restate Freudian theory in sociological terms and to eliminate its connections with biology".

Vegetotherapy is a form of Reichian psychotherapy that involves the physical manifestations of emotions. 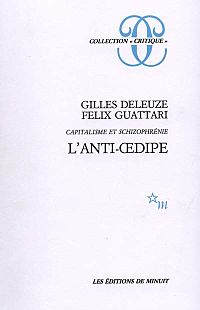 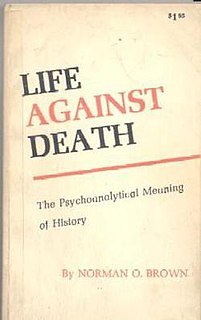 Life Against Death: The Psychoanalytical Meaning of History is a book by the American classicist Norman O. Brown, in which the author offers a radical analysis and critique of the work of Sigmund Freud, tries to provide a theoretical rationale for a nonrepressive civilization, explores parallels between psychoanalysis and Martin Luther's theology, and draws on revolutionary themes in western religious thought, especially the body mysticism of Jakob Böhme and William Blake. It was the result of an interest in psychoanalysis that began when the philosopher Herbert Marcuse suggested to Brown that he should read Freud.

The International Psychoanalytical Association (IPA) is an association including 12,000 psychoanalysts as members and works with 70 constituent organizations. It was founded in 1910 by Sigmund Freud, on an idea proposed by Sándor Ferenczi.

Heinz Hartmann, was a psychiatrist and psychoanalyst. He is considered one of the founders and principal representatives of ego psychology. 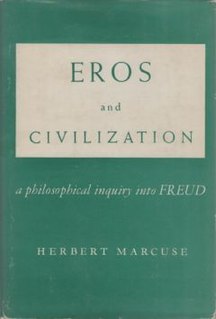 Eros and Civilization: A Philosophical Inquiry into Freud is a book by the German philosopher and social critic Herbert Marcuse, in which the author proposes a non-repressive society, attempts a synthesis of the theories of Karl Marx and Sigmund Freud, and explores the potential of collective memory to be a source of disobedience and revolt and point the way to an alternative future. Its title alludes to Freud's Civilization and Its Discontents (1930). The 1966 edition has an added "political preface". 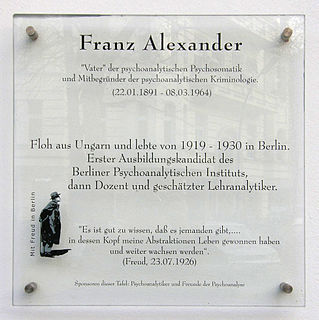 Franz Gabriel Alexander was a Hungarian-American psychoanalyst and physician, who is considered one of the founders of psychosomatic medicine and psychoanalytic criminology.

Reason and Revolution: Hegel and the Rise of Social Theory is a 1941 book by the philosopher Herbert Marcuse, in which the author discusses the social theories of the philosophers Georg Wilhelm Friedrich Hegel and Karl Marx. Marcuse reinterprets Hegel, with the aim of demonstrating that Hegel's basic concepts are hostile to the tendencies that led to fascism.

Janine Chasseguet-Smirgel was a leading French psychoanalyst, a training analyst, and past President of the Société psychanalytique de Paris in France. From 1983 to 1989, she was Vice President of the International Psychoanalytical Association. Chasseguet-Smirgel was Freud Professor at the University College, London, and Professor of Psychopathology at the Université Lille Nord de France. She is best known for her reworking of the Freudian theory of the ego ideal and its connection to primary narcissism, as well as for her extension of this theory to a critique of utopian ideology.

Otto Fenichel was a psychoanalyst of the so-called "second generation".

Ian Parker is a British psychologist and psychoanalyst. He is Emeritus Professor of Management in the School of Business at the University of Leicester.

Edward George Glover was a British psychoanalyst. He first studied medicine and surgery, and it was his elder brother, James Glover (1882–1926) who attracted him towards psychoanalysis. Both brothers were analysed in Berlin by Karl Abraham; indeed, the "list of Karl Abraham's analysands reads like a roster of psychoanalytic eminence: the leading English analysts Edward and James Glover" at the top. He then settled down in London where he became an influential member of the British Psycho-Analytical Society in 1921. He was also close to Ernest Jones.

Psychoanalytic sociology is the research field that analyzes society using the same methods that psychoanalysis applied to analyze an individual. 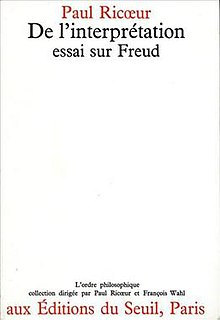 Freud and Philosophy: An Essay on Interpretation is a 1965 book about Sigmund Freud, the founder of psychoanalysis, by the French philosopher Paul Ricœur. In Freud and Philosophy, Ricœur interprets Freud's work in terms of hermeneutics, the theory of the rules that govern the interpretation of a particular text, and discusses phenomenology, a school of philosophy founded by Edmund Husserl. He addresses questions such as the nature of interpretation in psychoanalysis, the understanding of human nature to which it leads, and the relationship between Freud's interpretation of culture and other interpretations. The book was first published in France by Éditions du Seuil, and in the United States by Yale University Press.

Ernst Simmel was a German-American neurologist and psychoanalyst.