The Lombard League (Lega Lombarda in Italian, Liga Lombarda in Lombard) was a medieval alliance formed in 1167, [1] supported by the Pope, to counter the attempts by the Hohenstaufen Holy Roman Emperors to assert influence over the Kingdom of Italy as a part of the Holy Roman Empire. At its apex, it included most of the cities of Northern Italy, but its membership changed with time. With the death of the third and last Hohenstaufen emperor, Frederick II, in 1250, it became obsolete and was disbanded.

The association succeeded the Veronese League, established in 1164 by Verona, Padua, Vicenza, and the Republic of Venice, after Emperor Frederick I Barbarossa had claimed direct Imperial control over Italy at the 1158 Diet of Roncaglia and began to replace the Podestà magistrates by his own commissioners. It was backed by Pope Alexander III (the town of Alessandria was named in his honour), who also wished to see Frederick's power in Italy decline. [2] Formed at Pontida on 1 December[ citation needed ] 1167, the Lombard League included—beside Verona, Padua, Vicenza and Venice—cities like Crema, Cremona, Mantua, Piacenza, Bergamo, Brescia, Milan, Genoa, Bologna, Modena, Reggio Emilia, Treviso, Vercelli, Lodi, Parma, Ferrara and even some lords, such as the Marquis Malaspina and Ezzelino da Romano.

Though not a declared separatist movement, the League openly challenged the emperor's claim to power (Honor Imperii). Frederick I strived against the cities, especially Milan, which already had been occupied and devastated in 1162. He nevertheless was no longer able to play off the cities against each other. At the Battle of Legnano on 29 May 1176, the emperor's army finally was defeated. The Treaty of Venice, which took place in 1177, established a six-year truce from August, 1178 to 1183, when in the Peace of Constance a compromise was found where after the Italian cities agreed to remain loyal to the Holy Roman Empire but retained local jurisdiction and droit de régale over their territories. Among the League's members, Milan, now favoured by the emperor, began to take a special position, which sparked conflicts mainly with the citizens of Cremona.

The Lombard League was renewed several times and upon the death of Frederick's son Emperor Henry VI in 1197 once again gained prestige, while Henry's minor son Frederick II, elected King of the Romans, had to fight for the Imperial throne against his Welf rival Otto IV. In 1226 Frederick, sole king since 1218 and emperor since 1220, aimed to convene the Princes in Italy in order to prepare the Sixth Crusade.

The efforts of Emperor Frederick II to gain greater power in Italy were aborted by the cities, which earned the League an Imperial ban. The emperor's measures included the taking of Vicenza and his victory in the 1237 Battle of Cortenuova which established the reputation of the Emperor as a skillful strategist. [2] Nevertheless, he misjudged his strength, rejecting all Milanese peace overtures and insisting on unconditional surrender. It was a moment of grave historic importance, when Frederick's hatred coloured his judgment and blocked all possibilities of a peaceful settlement. Milan and five other cities withstood his attacks, and in October 1238 he had to unsuccessfully raise the siege of Brescia.

The Lombard League once again receiving papal support by Pope Gregory IX, who excommunicated Frederick II in 1239, [3] and effectively countered the emperor's efforts. During the 1248 Siege of Parma, the Imperial camp was assaulted and taken, and in the ensuing battle the Imperial side was routed. Frederick II lost the Imperial treasure and with it any hope of maintaining the impetus of his struggle against the rebellious communes and against the pope. The League was dissolved in 1250 when Frederick II died. Under his later successors the Empire exerted much less influence on Italian politics.

In addition of being a military alliance, the Lombard League was one of the first examples of confederal system in the world of communes. Indeed, the League had a distinct council of its members, called Universitas, consisting of representatives appointed by individual municipalities, and which voted by majority in various fields (such as the admission of new members, war and peace with the Emperor), powers that grew more and more with the years, so that the university obtained regulatory, tax and judicial power, a system comparable to that of a present-day republic. [4]

In the first period of the League the communes had little to do with confederal affairs, and the members of the Universitas were independent; in the second period the municipalities gained some influence but, as a counterweight, members was more involved in the municipal council policy. In addition, the League abolished the duties,with the creation of a customs union. [4] 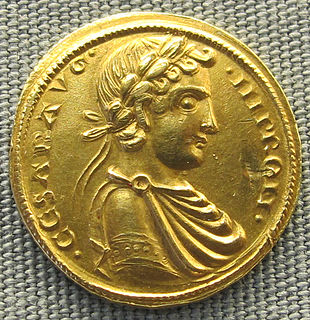 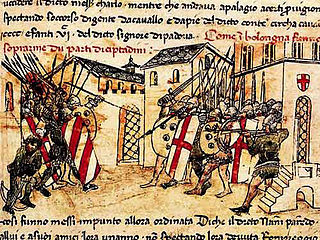 The Guelphs and Ghibellines were factions supporting the Pope and the Holy Roman Emperor, respectively, in the Italian city-states of central and northern Italy. During the 12th and 13th centuries, rivalry between these two parties formed a particularly important aspect of the internal politics of medieval Italy. The struggle for power between the Papacy and the Holy Roman Empire had arisen with the Investiture Controversy, which began in 1075 and ended with the Concordat of Worms in 1122. The division between the Guelphs and Ghibellines in Italy, fuelled by the imperial Great Interregnum, persisted until the 15th century.

The Duchy of Milan was a state of the Holy Roman Empire in northern Italy. It was created in 1395 by Gian Galeazzo Visconti, Lord of Milan, who obtained from Wenceslaus, King of the Romans, the founding diploma. At that time, it included twenty-six towns and the wide rural area of the middle Padan Plain east of the hills of Montferrat. During much of its existence, it was wedged between Savoy to the west, Venice to the east, the Swiss Confederacy to the north, and separated from the Mediterranean by Genoa to the south. The Duchy eventually fell to Habsburg Austria with the Treaty of Baden (1714), concluding the War of the Spanish Succession. The Duchy remained an Austrian possession until 1796, when a French army under Napoleon Bonaparte conquered it, and it ceased to exist a year later as a result of the Treaty of Campo Formio, when Austria ceded it to the new Cisalpine Republic.

The Battle of Cortenuova was fought on 27 November 1237 in the course of the Guelphs and Ghibellines Wars: in it, Holy Roman Emperor Frederick II defeated the Second Lombard League.

Ezzelino III da Romano was an Italian feudal lord, a member of the Ezzelino family, in the March of Treviso. He was a close ally of the emperor Frederick II, and ruled Verona, Vicenza and Padua for almost two decades. He became infamous as a cruel tyrant, and was, in fact, the most "notorious" of the "early tyrants".

The Battle of Legnano was fought between the imperial army of Frederick Barbarossa and the troops of the Lombard League on May 29, 1176 near the town of Legnano, in present-day Lombardy, in Italy. Although the presence of the enemy nearby was already known to both sides, they suddenly met without having time to plan any strategy. 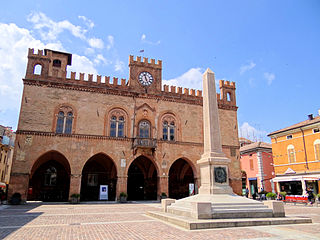 Fidenza is a town and comune in the province of Parma, Emilia-Romagna region, Italy. It has around 27,000 inhabitants. The town was renamed Fidenza in 1927, recalling its Roman name of Fidentia; before, it was called Borgo San Donnino.

Enzo was an illegitimate son of the Hohenstaufen emperor Frederick II, who appointed him 'King of Sardinia' in 1238. He played a major role in the wars between Guelphs and Ghibellines in the Imperial kingdom of Italy, and was captured by his enemies in 1249. He remained imprisoned in Bologna until his death. 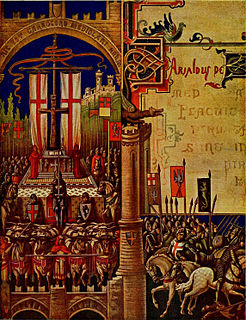 A Carroccio was a large four-wheeled wagon bearing the city signs around which the militia of the medieval communes gathered and fought. It was particularly common among the Lombard, Tuscan and, more generally, northern Italian municipalities. Later its use spread even outside Italy. It was the symbol of municipal autonomy. Priests celebrated Mass at the altar before the battle, and the trumpeters beside them encouraged the fighters to the fray.

The Battle of Fossalta was an episode of the War of the Guelphs and Ghibellines in Northern Italy. It took place in Fossalta, a small location on the Panaro river, and is especially remembered for the capture of Enzio of Sardinia, son of Emperor Frederick II of Hohenstaufen.

The Battle of Parma was fought on 18 February 1248 between the forces of Holy Roman Emperor Frederick II and the Guelphs. The Guelphs attacked the Imperial camp when Frederick II was away. The Imperial forces were defeated and much of Frederick's treasure was lost.

The naval Battle of Giglio was a military clash between a fleet of the Holy Roman Emperor Frederick II and a fleet of the Republic of Genoa in the Tyrrhenian Sea. It took place on Friday, May 3, 1241 between the islands of Montecristo and Giglio in the Tuscan Archipelago and ended with the victory of the Imperial fleet.

Aribert was the archbishop of Milan from 1018, a quarrelsome warrior-bishop in an age in which such figures were not uncommon.

The Treaty or Peace of Venice, 1177, was a peace treaty between the papacy and its allies, the north Italian city-states of the Lombard League, and Frederick I, Holy Roman Emperor. The Norman Kingdom of Sicily also took part in negotiations and the treaty thereby determined the political course of all Italy for the next several years.

The Kingdom of Italy, also commonly Imperial Italy or Kingdom of Lombardy, was one of the constituent kingdoms of the Holy Roman Empire, along with the kingdoms of Germany, Bohemia, and Burgundy. It comprised northern and central Italy, but excluded the Republic of Venice and the Papal States. Its original capital was Pavia until the 11th century.

Alberto da Giussano is a legendary character of the 12th century who would have participated, as a protagonist, in the battle of Legnano on 29 May 1176. In reality, according to historians, the actual military leader of the Lombard League in the famous military battle with Frederick Barbarossa was Guido da Landriano. Historical analyses made over time have indeed shown that the figure of Alberto da Giussano never existed.

The Flag of Milan consists of a red cross on a white field. Whilst similar to the Cross of Saint George, the flag instead symbolises the connection between Saint Ambrose and the city of Milan.

The March of Verona and Aquileia was a vast march of the Holy Roman Empire in northeastern Italy during the Middle Ages, centered on the cities of Verona and Aquileia. Seized by King Otto I of Germany in 952, it was held by the Dukes of Bavaria; from 976 in personal union with the Duchy of Carinthia. The margravial regime ended with the advent of the Lombard League in 1167.

The oath of Pontida, according to tradition, would have been a ceremony that would have sanctioned on 7 April 1167, in the abbey of Pontida, near Bergamo, in Italy, the birth of the Lombard League, or of a military alliance between the municipalities of Milan, Lodi, Ferrara, Piacenza and Parma aimed at the armed struggle against the Holy Roman Empire by Frederick Barbarossa.