Mythlore is a biannual (originally quarterly) peer-reviewed academic journal founded by Glen GoodKnight and published by the Mythopoeic Society. [1] [2] [3] Although it publishes articles that explore the genres of myth and fantasy in general, special attention is given to the three most prominent members of the Inklings: J. R. R. Tolkien, C. S. Lewis, and Charles Williams. [4] [5] The current editor-in-chief is the Tolkien scholar Janet Brennan Croft. [6] The Tolkien Society describes Mythlore as a "refereed scholarly journal". [7]

Mythlore appeared in January 1969 under the editorship of Glen H. GoodKnight, founder of the Mythopoeic Society. Early issues were fanzines, albeit with a "sercon" ("serious and constructive") bent; for a time it included alternate issues of Mythprint. [8] Mythlore became a peer-reviewed journal beginning with issue #85 (Winter 1999), under the editorship of Theodore Sherman. Since 2006, it has been edited by Janet Brennan Croft. [9] [6]

The full text of Mythlore from 2002 onward is available in Expanded Academic ASAP. Mythlore is also indexed in the Annual Bibliography of English Language and Literature, the Modern Language Association International Bibliography, and other sources. An agreement with JSTOR was announced in 2019. A detailed index (with abstracts) to issues 1-100 was published in January 2008 by The Mythopoeic Press. It has been superseded by an electronic index updated twice a year and available for free download from the journal's website. The journal became online open-access in 2017, and dropped its protection of articles less than one year old in 2019; most back issues are now available online through an arrangement with Southwestern Oklahoma State University Library. [10]

Tolkien Journal was an early "sercon" which was absorbed into Mythlore. It was started by New York Tolkien Society founder Richard Plotz in 1965. Dick Plotz stepped down after issue #8 and Ed Meškys took over the society and the journal. In issue #15, Meškys announced the permanent merger of the Tolkien Society of America with the Mythopoeic Society and of Tolkien Journal with Mythlore. [11] When GoodKnight became editor with Mythlore #12, the new subtitle "A Journal of J.R.R. Tolkien, C.S. Lewis, and Charles Williams Studies" replaced Tolkien Journal on the table of contents page. [12] 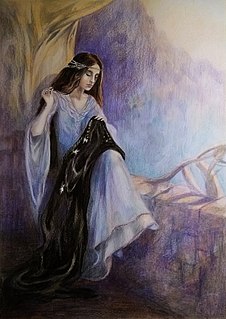 Arwen Undómiel is a fictional character in J. R. R. Tolkien's Middle-earth legendarium. She appears in the novel The Lord of the Rings. Arwen is one of the half-elven who lived during the Third Age; her father was Elrond half-elven, lord of the Elvish sanctuary of Rivendell, while her mother was the Elf Celebrian, daughter of the Elf-queen Galadriel, ruler of Lothlórien. She marries the Man Aragorn, who becomes King of Arnor and Gondor.

"The Scouring of the Shire" is the penultimate chapter of the high fantasy novel The Lord of the Rings by J. R. R. Tolkien. The Fellowship hobbits, Frodo, Sam, Merry, and Pippin, return home to the Shire to find that it is under the brutal control of ruffians and their leader "Sharkey", revealed to be the Wizard Saruman. The ruffians have despoiled the Shire, cutting down trees and destroying old houses, as well as replacing the old mill with a larger one full of machinery which pollutes the air and the water. The hobbits rouse the Shire to rebellion, lead their fellow-hobbits to victory in the Battle of Bywater, and end Saruman's rule.

Tolkien fandom is an international, informal community of fans of the works of J. R. R. Tolkien, especially of the Middle-earth legendarium which includes The Hobbit, The Lord of the Rings, and The Silmarillion. The concept of Tolkien fandom as a specific type of fan subculture sprang up in the United States in the 1960s, in the context of the hippie movement, to the dismay of the author, who talked of "my deplorable cultus".

The Mythopoeic Society (MythSoc) is a non-profit organization devoted to the study of mythopoeic literature, particularly the works of J. R. R. Tolkien, Charles Williams, and C. S. Lewis, all members of The Inklings, an informal group of writers who met weekly in C.S. Lewis' rooms at Magdalen College, Oxford, from the early 1930s through late 1949. 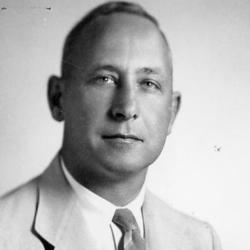 Paul Harold Kocher was a scholar, author, and professor of English. He wrote extensively on the works of J. R. R. Tolkien as well as on Elizabethan English drama, philosophy, religion, and medicine. His numerous publications include studies of Christopher Marlowe and Francis Bacon, as well as J. R. R. Tolkien. He also authored books on the Franciscan missions of 18th- and 19th-century California.

Tolkien Studies: An Annual Scholarly Review is an academic journal publishing papers on the works of J. R. R. Tolkien. The journal's founding editors are Douglas A. Anderson, Michael D. C. Drout, and Verlyn Flieger, and the current editors are Michael D. C. Drout, Verlyn Flieger, and David Bratman. It states that it is the first scholarly journal published by an academic press in the area of Tolkien research.

Diana Pavlac Glyer is an American author, speaker, and teacher whose work centers on C. S. Lewis, J. R. R. Tolkien, and the Inklings. She teaches in the Honors College at Azusa Pacific University in California.

The Road to Middle-earth: How J. R. R. Tolkien Created a New Mythology is a scholarly study of the Middle-earth works of J. R. R. Tolkien written by Tom Shippey and first published in 1982. Two further editions extended and updated the work, including a discussion of Peter Jackson's film version of The Lord of the Rings.

Richard Plotz is the co-founder of the Tolkien Society of America, which in 1972 was merged with the Mythopoeic Society. Plotz is known for his interview with J.R.R. Tolkien in the late 1960s under the auspices of Seventeen Magazine, and for a 1967 letter from Tolkien delineating the declension of the noun in late Quenya. Plotz attended Harvard University as an undergraduate. 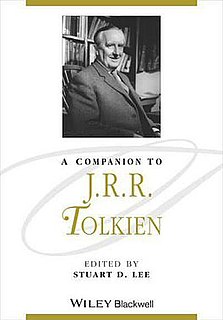 A Companion to J. R. R. Tolkien is a 2014 book edited by Stuart D. Lee. It is one of several reference works dedicated to the field of Tolkien studies.

The roles of women in The Lord of the Rings have often been assessed as insignificant, or important only in relation to male characters in a story about men for boys. Meanwhile, other commentators have noted the empowerment of the three major women characters, Galadriel, Éowyn, and Arwen, and provided in-depth analysis of their roles within the narrative of The Lord of the Rings.

Glen GoodKnight (1941-2010) was the founder of the Mythopoeic Society and the editor of its journal, Mythlore between 1970 and 1998; in that time the publication grew from being a fan magazine to a peer-reviewed academic journal. He was an expert on and collector of the works of J. R. R. Tolkien and his fellow Inklings, C. S. Lewis and Charles Williams.

John Garth is a British author, known especially for writings about J. R. R. Tolkien including his biography Tolkien and the Great War and a book on the places that inspired Middle-earth, The Worlds of J.R.R. Tolkien.

Richard C. West was one of the first Tolkien scholars. He is best known for his 1975 essay on the interlace structure of The Lord of the Rings, for which he won the 1976 Mythopoeic Scholarship Award for Inkling Studies.

David Bratman is a librarian and Tolkien scholar.

Jason Fisher is a Tolkien scholar and winner of a Mythopoeic Scholarship Award in 2014 for his book Tolkien and the Study of His Sources: Critical Essays. He served as the editor of the Mythopoeic Society's monthly Mythprint from 2010 to 2013. He is the author of many book chapters, academic articles, and encyclopedia entries on J. R. R. Tolkien.

Tolkien and the Great War: The Threshold of Middle-earth is a 2003 biography by John Garth of the philologist and fantasy author J. R. R. Tolkien's early life, focusing on his formative military experiences during the First World War.