Last updated July 09, 2021
This article is about the area of Hong Kong. For the district, see Sha Tin District. For Sha Tin as a new town project, see Sha Tin New Town. For the composer, see Judith Shatin. For the village in Armenia, see Shatin, Armenia.
Neighbourhood in New Territories, Hong Kong, China

The new town was founded in 1973 under the New Towns Development Programme of the Hong Kong government. Its current name was named after the nearby village of Sha Tin Wai.

Tai Wai Village, located in Tai Wai, next to Sha Tin, and the oldest and largest walled village in Sha Tin District, was built in 1574, during the Ming Dynasty.

Before British rule in Hong Kong, the area of Sha Tin and its vicinity was referred to as Lek Yuen (lit. "source of trickling" or "source of clear water"). Colonial officials allegedly mistook[ citation needed ] the name of the Sha Tin Wai village as the name of the area and it has been used ever since. Nowadays, the original name is used to refer to Lek Yuen Estate.

There was a market township Sha Tin Hui at the present location of Sha Tin Centre Street and New Town Plaza shopping centre, near the Sha Tin station of the MTR East Rail line.

Sha Tin was the location of the first flight of a powered aircraft in Hong Kong in 1911. The aeroplane was named as the Spirit of Sha Tin (沙田精神號). A full size replica of this plane now hangs in Hong Kong International Airport.

Starting in the 1970s, the area became part of the Sha Tin New Town development. Since then, the economy in the area has greatly improved and living standards have also increased. Sha Tin Town Centre was developed during the mid-1980s to help "link the town's currently dispersed residents into one cohesive community." [1] The 18-hectare site, adjacent to the railway station, was built up in stages to house an array of uses including the New Town Plaza, numerous smaller shopping centres, Sha Tin Park, magistracy, library, town hall, marriage registry, hotel, New Town Tower, a town square, and residential towers.

Due to their proximity to the Shenzhen border, towns in the northern parts of Hong Kong, notably Sheung Shui and Yuen Long, have become hubs for parallel traders who have been buying up large quantities of goods, forcing up local prices and disrupting the daily lives of local citizens. [2] [3] Since 2012, there has been an increase in mainland parallel traders arriving in the North District of Hong Kong to re-export infant formula and household products – goods popular with mainlanders – across the border to Shenzhen. [4] The volume of smuggling activity spilled over into Tuen Mun and Sha Tin in 2014.

The first anti-parallel trading protest was started at Sheung Shui in September 2012. [5] As government efforts to limit the adverse impact of mainland trafficking were widely seen as inadequate, so there have been further subsequent protests in towns in the North District including Sha Tin. [6] [7]

South bank of Shing Mun River. From west to east:

North bank of Shing Mun River. From west to east:

The Prince of Wales Hospital was officially opened in 1982. It provides about 1,400 hospital beds and 24 hours Accident & Emergency service to the eastern New Territories. Other institutions which provide hospital services include the Sha Tin Hospital, the Cheshire Home and the Union Hospital.

There are numerous cultural, recreational and sport facilities in Sha Tin including the Town Hall, swimming pools, football pitches, indoor recreation centres and various track and field facilities for the use of Sha Tin residents.

The 8-hectare Sha Tin Park was opened to public in 1988. Apart from its horticultural gardens and impressive water features, it also includes a large open plaza and a bandstand. The Ma On Shan Park, which is adjacent to Ma On Shan Swimming Pool, occupies 5.5 hectare of land.

The Sha Tin Racecourse, occupying approximately 70 hectares, rests on reclaimed flatland. At the centre of the racecourse is the Penfold Garden which opens to the public on non-racing days.

Located in Tai Wai, the Hong Kong Heritage Museum was opened at the end of 2000. Apart from introducing the art, culture and history of the New Territories, the museum also exhibits a variety of cultural artifacts for public appreciation. The museum, which can accommodate 6,000 visitors, is the largest in the territory.

Cycling has been a distinctive feature in Sha Tin and is very popular among both local people and visitors. The first cycle track in Sha Tin was opened to public in 1981, running along Tolo Highway to Tai Po, and this remains the territory's most popular cycling venue, drawing many occasional riders at the weekends, as well as dedicated cyclists. To tie in with the development of Ma On Shan, the cycle track was extended to Ma On Shan.

Hiking is also a wonderful activity you could do in your leisure time living in Sha Tin. There are several starting points including Hin Tin Village, Sha Tin Tau Village and Hung Mui Kuk Barbecue Area leading to the track of Lion Rock Mountain hiking route. It would take you 1 hour to 4 hours to complete the track depends on the starting point and ending point you choose.

Sha Tin is famous for certain local variants of Cantonese food such as ShanSui Tofu (Chinese:山水豆腐; lit. 'mountain-water beancurd'), barbecued pigeon and chicken congee. The cooked food stalls in Wo Che Estate and Fo Tan are hotspots for food.

There are numerous transportation links both within the Sha Tin District and connecting it to other places in Hong Kong.

The road network in Sha Tin is well developed to provide efficient cross-town and local access traffic. Connection between Sha Tin and Kowloon mainly relies on the Lion Rock Tunnel, Tate's Cairn Tunnel, Shing Mun Tunnel and Tai Po Road which makes it easy to reach from many areas of Kowloon as well as from Tsuen Wan.

At present, there are over 110 routes of public bus serving Sha Tin.[ citation needed ]

While having been mass developed in the 1970s, Shatin's architecture maintains a degree of diversity. Most public housing estates were designed in a modern architectural style. Several shopping centres, hotels and government buildings around Shatin Central are clad in red brick.

Sha Tin Wai is a station on the Tuen Ma line in Sha Tin, Hong Kong. The name "Sha Tin Wai" comes from the village called Sha Tin Wai, which is located to the northeast of the station. It was provisionally called "Sha Kok Street" before the Ma On Shan line opened, because it is located at Sha Kok Street.

Sha Tin New Town, or known as Sha Tin-Ma On Shan New Town or Sha Tin Town is one of the satellite towns and new towns of Hong Kong. It is within the Sha Tin District, the New Territories. The New Town covers the neighbourhoods such as Sha Tin, Tai Wai, Fo Tan, Tai Shui Hang, Ma On Shan. The Shing Mun River runs through the middle of the town. 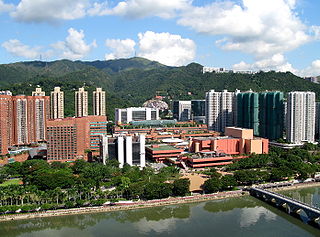 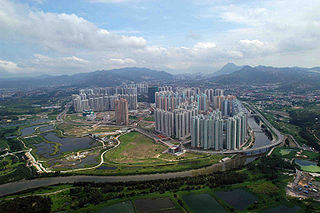 The Hong Kong government started developing new towns in the 1950s to accommodate Hong Kong's booming population. At the first phase of development, the newly developed towns were called "satellite towns", a concept borrowed from the United Kingdom, of which Hong Kong was then still a colony. Kwun Tong, located in eastern Kowloon, and Tsuen Wan, located in the south-west of the New Territories, were designated as the first two satellite towns, when the urban area in Hong Kong was still relatively small, restricted to the central and western parts of Kowloon Peninsula and the northern side of Hong Kong Island. Wah Fu Estate was also built in a remote corner on the southern side of Hong Kong Island, with similar concepts but at a smaller scale.