Thornton Viaduct is a disused railway viaduct crossing Pinch Beck valley at Thornton, in the City of Bradford, West Yorkshire, England. It is 300 yards (270 m) long and has 20 arches. [1] It was built in an S-shape to allow a smooth access to Thornton station. The viaduct was part of the GNR's Queensbury Lines running between Queensbury and Keighley. It stopped carrying passengers in 1955 but remained open to goods until the 1960s. At that time, the railway closed and the tracks were pulled up. The viaduct is now a Grade II listed building. [2]

The viaduct was reopened in 2008 as part of the Great Northern Railway Trail between Cullingworth and Queensbury along the track bed. [3]

This was the viaduct used in the episode of Last of the Summer Wine entitled "Three Men and a Mangle" where they hoisted the mangle up from the road.

The Dartmoor line is a 15+1⁄2-mile (24.9 km) railway line in Devon, England. From Crediton, the line runs alongside the Tarka Line to the site of the former Coleford Junction where it diverges west to Okehampton. Previously a heritage line, it is owned by Network Rail. 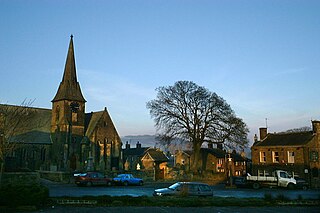 Cullingworth is a village and civil parish in the City of Bradford, West Yorkshire, England. Within the boundaries of the historic West Riding of Yorkshire, it is 7 miles (11 km) west of Bradford and 3 miles (5 km) south of Keighley. The surrounding countryside is mainly used for sheep and cattle farming, with areas of moorland lying to the north and west.

Halifax railway station serves the town of Halifax in West Yorkshire, England. It lies on the Calder Valley line and is 17 miles (27 km) west from Leeds. 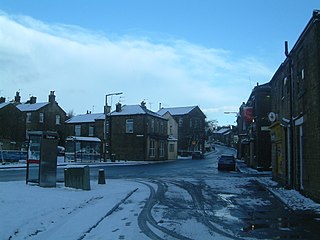 Denholme is a town and civil parish in the Bradford Metropolitan Borough, West Yorkshire, England. It is 8 miles (13 km) west of Bradford, 7 miles (11 km) from Keighley and roughly the same distance from Halifax. Administratively, it is part of the Bingley Rural ward of the City of Bradford. Denholme has a population of 2,976, increasing to 3,489 at the 2011 Census.

The Digswell Viaduct, also called Welwyn Viaduct, is a railway viaduct that carries the East Coast Main Line over the River Mimram in the county of Hertfordshire in England. A prominent local landmark, it is located between Welwyn Garden City and Digswell. It is just to the south of Welwyn North railway station. 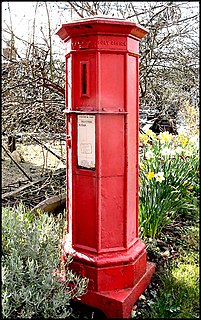 Andrew Handyside and Company was an iron founder in Derby, England, in the nineteenth century.

The Bennerley Viaduct is a disused railway viaduct spanning the Erewash Valley between Awsworth (Nottinghamshire) and Ilkeston (Derbyshire) in central England. It was built in 1877 but closed to rail traffic in 1968, as part of the Beeching cuts. It was sold to conservation group Railway Paths Ltd in 2001.

The Monsal Trail is a cycling, horse riding and walking trail in the Derbyshire Peak District. It was constructed from a section of the former Manchester, Buxton, Matlock and Midland Junction Railway, which was built by the Midland Railway in 1863 to link Manchester with London and closed in 1968. The Monsal Trail is about 8.5 miles (13.7 km) long and opened in 1981. It starts at the Topley Pike junction in Wye Dale, 3 miles (4.8 km) east of Buxton, and runs to Coombs Viaduct, 1 mile (1.6 km) south-east of Bakewell. It follows the valley of the River Wye. The trail passes through Blackwell Mill, Chee Dale, Millers Dale, Cressbrook, Monsal Dale, Great Longstone, Hassop and Bakewell. The trail has numerous landmarks including Headstone Viaduct, Cressbrook Mill, Litton Mill and Hassop railway station, and passes through six tunnels.

Seale is a village in Surrey, England. Seale covers most of the civil parish of Seale and Sands and the steep slope and foot of the south side of the Hog's Back as well as a large hill which exceeds it – as such is part of the Surrey Hills Area of Outstanding Natural Beauty.

Smardale is a small village and former civil parish, now in the parish of Waitby, in the Eden district, in Cumbria, England. In 1891 the parish had a population of 36. 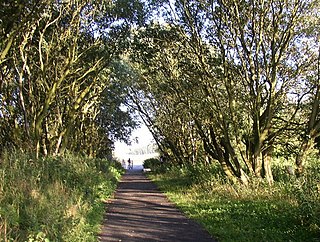 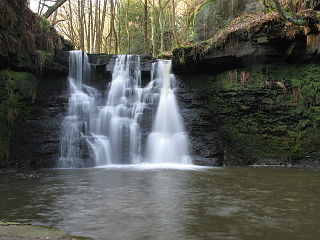 Lees Moor Tunnel is an abandoned tunnel on the former Great Northern Railway line between Queensbury and Keighley in West Yorkshire, England. The former dual track tunnel is just north of the village of Cullingworth in West Yorkshire and when built was 1,533 yards (1,402 m) long. Due to the pitch black inside and the squealing of the wheels on the 1 in 50 radius curve, drivers nicknamed it the 'Hell Hole'. After closure to passengers, the tunnel was used in experiments involving the effects of smoke inhalation and cancer.

Wikimedia Commons has media related to Thornton Viaduct .
This page is based on this Wikipedia article
Text is available under the CC BY-SA 4.0 license; additional terms may apply.
Images, videos and audio are available under their respective licenses.