Triptolide is a diterpenoid epoxide which is produced by the thunder god vine, Tripterygium wilfordii . It has in vitro and in vivo activities against mouse models of polycystic kidney disease [2] and pancreatic cancer, but its physical properties [3] and severe toxicity [4] limit its therapeutic potential.

Consequently, a synthetic water-soluble prodrug, minnelide, is being studied clinically instead. [3] [5]

Several putative target proteins of triptolide have been reported, including polycystin-2, [6] ADAM10, [7] DCTPP1, [8] TAB1, [9] and XPB. [10] [11] Multiple triptolide-resistant mutations exist in XPB (ERCC3) and its partner protein GTF2H4. [12] However, no triptolide-resistant mutations were found in polycystin-2, ADAM10, DCTPP1 and TAB1. Cys342 of XPB was identified as the residue that undergoes covalent modification by the 12,13-epoxide group of triptolide, and the XPB-C342T mutant rendered the T7115 cell line nearly completely resistant to triptolide. [10] The level of resistance conferred by the C342T mutation is about 100-fold higher than the most triptolide-resistant mutants previously identified. [12] Together, these results validate XPB as a target responsible for the antiproliferative activity of triptolide. The disruption of super-enhancer networks has also been suggested as a mechanism of action. [13]

Minnelide is a more water-soluble synthetic prodrug of triptolide which is converted to triptolide in vivo . [3] [14] In a preclinical mouse model of pancreatic cancer, it was "even more effective than gemcitabine". Its Phase II clinical trials are expected to conclude in February 2019. [15]

Glutriptolide, a glucose conjugate of triptolide with better solubility and lower toxicity, did not inhibit XPB activity in vitro, but exhibited tumor control in vivo, which is likely due to sustained stepwise release of active triptolide within cancer cells. [16] A second generation glutriptolide has been recently reported for targeting hypoxic cancer cells with increased glucose transporter expression. [17]

Transcription is the process of copying a segment of DNA into RNA. The segments of DNA transcribed into RNA molecules that can encode proteins are said to produce messenger RNA (mRNA). Other segments of DNA are copied into RNA molecules called non-coding RNAs (ncRNAs). Averaged over multiple cell types in a given tissue, the quantity of mRNA is more than 10 times the quantity of ncRNA. The general preponderance of mRNA in cells is valid even though less than 2% of the human genome can be transcribed into mRNA, while at least 80% of mammalian genomic DNA can be actively transcribed, with the majority of this 80% considered to be ncRNA.

The epoxyeicosatrienoic acids or EETs are signaling molecules formed within various types of cells by the metabolism of arachidonic acid by a specific subset of Cytochrome P450 enzymes termed cytochrome P450 epoxygenases. These nonclassic eicosanoids are generally short-lived, being rapidly converted from epoxides to less active or inactive dihydroxy-eicosatrienoic acids (diHETrEs) by a widely distributed cellular enzyme, Soluble epoxide hydrolase (sEH), also termed Epoxide hydrolase 2. The EETs consequently function as transiently acting, short-range hormones; that is, they work locally to regulate the function of the cells that produce them or of nearby cells. The EETs have been most studied in animal models where they show the ability to lower blood pressure possibly by a) stimulating arterial vasorelaxation and b) inhibiting the kidney's retention of salts and water to decrease intravascular blood volume. In these models, EETs prevent arterial occlusive diseases such as heart attacks and brain strokes not only by their anti-hypertension action but possibly also by their anti-inflammatory effects on blood vessels, their inhibition of platelet activation and thereby blood clotting, and/or their promotion of pro-fibrinolytic removal of blood clots. With respect to their effects on the heart, the EETs are often termed cardio-protective. Beyond these cardiovascular actions that may prevent various cardiovascular diseases, studies have implicated the EETs in the pathological growth of certain types of cancer and in the physiological and possibly pathological perception of neuropathic pain. While studies to date imply that the EETs, EET-forming epoxygenases, and EET-inactivating sEH can be manipulated to control a wide range of human diseases, clinical studies have yet to prove this. Determination of the role of the EETS in human diseases is made particularly difficult because of the large number of EET-forming epoxygenases, large number of epoxygenase substrates other than arachidonic acid, and the large number of activities, some of which may be pathological or injurious, that the EETs possess.

XPB is an ATP-dependent DNA helicase in humans that is a part of the TFIIH transcription factor complex. 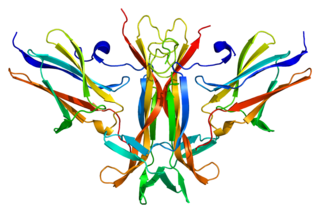 Mesothelin, also known as MSLN, is a protein that in humans is encoded by the MSLN gene.

Heparin-binding EGF-like growth factor (HB-EGF) is a member of the EGF family of proteins that in humans is encoded by the HBEGF gene.

Transcription factor E2F1 is a protein that in humans is encoded by the E2F1 gene.

Cyclin-dependent kinase 7, or cell division protein kinase 7, is an enzyme that in humans is encoded by the CDK7 gene. 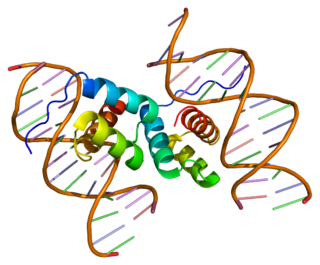 PDX1, also known as insulin promoter factor 1, is a transcription factor in the ParaHox gene cluster. In vertebrates, Pdx1 is necessary for pancreatic development, including β-cell maturation, and duodenal differentiation. In humans this protein is encoded by the PDX1 gene, which was formerly known as IPF1. The gene was originally identified in the clawed frog Xenopus laevis and is present widely across the evolutionary diversity of bilaterian animals, although it has been lost in evolution in arthropods and nematodes. Despite the gene name being Pdx1, there is no Pdx2 gene in most animals; single-copy Pdx1 orthologs have been identified in all mammals. Coelacanth and cartilaginous fish are, so far, the only vertebrates shown to have two Pdx genes, Pdx1 and Pdx2. 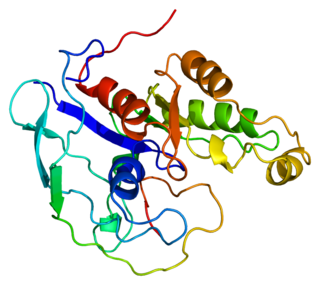 Activated CDC42 kinase 1, also known as ACK1, is an enzyme that in humans is encoded by the TNK2 gene. TNK2 gene encodes a non-receptor tyrosine kinase, ACK1, that binds to multiple receptor tyrosine kinases e.g. EGFR, MERTK, AXL, HER2 and insulin receptor (IR). ACK1 also interacts with Cdc42Hs in its GTP-bound form and inhibits both the intrinsic and GTPase-activating protein (GAP)-stimulated GTPase activity of Cdc42Hs. This binding is mediated by a unique sequence of 47 amino acids C-terminal to an SH3 domain. The protein may be involved in a regulatory mechanism that sustains the GTP-bound active form of Cdc42Hs and which is directly linked to a tyrosine phosphorylation signal transduction pathway. Several alternatively spliced transcript variants have been identified from this gene, but the full-length nature of only two transcript variants has been determined.

Polycystic kidney disease 2-like 1 protein also known as transient receptor potential polycystic 2 is a protein that in humans is encoded by the PKD2L1 gene.

Epoxide hydrolase 1 is an enzyme encoded by the EPHX1 gene in humans.

In molecular biology miR-375 microRNA is a short RNA molecule. MicroRNAs (miRNAs) are small, non-coding RNAs that regulate genes post-transcriptionally by inhibiting translation and/or causing mRNA degradation. miR-375 is found on human chromosome 2 in between the CRYBA2 and CCDC108 genes. 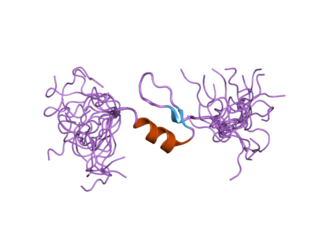 Soluble epoxide hydrolase (sEH) is a bifunctional enzyme that in humans is encoded by the EPHX2 gene. sEH is a member of the epoxide hydrolase family. This enzyme, found in both the cytosol and peroxisomes, binds to specific epoxides and converts them to the corresponding diols. A different region of this protein also has lipid-phosphate phosphatase activity. Mutations in the EPHX2 gene have been associated with familial hypercholesterolemia.

Triciribine is a cancer drug which was first synthesized in the 1970s and studied clinically in the 1980s and 1990s without success. Following the discovery in the early 2000s that the drug would be effective against tumours with hyperactivated Akt, it is now again under consideration in a variety of cancers. As PTX-200, the drug is currently in two early stage clinical trials in breast cancer and ovarian cancer being conducted by the small molecule drug development company Prescient Therapeutics.

Calcium/calmodulin dependent protein kinase II inhibitor 1 is a protein that in humans is encoded by the CAMK2N1 gene.