Last updated August 14, 2020
This article is about the Village of Valley Forge, in southeastern Pennsylvania. For other uses, see Valley Forge (disambiguation).
Unincorporated settlement in Pennsylvania, United States

The Village of Valley Forge is an unincorporated settlement located on the west side of Valley Forge National Historical Park at the confluence of Valley Creek and the Schuylkill River in Pennsylvania, United States. The remaining village is in Schuylkill Township of Chester County, but once spanned Valley Creek into Montgomery County. The name Valley Forge is often used to refer to anywhere in the general vicinity of the park, and many places actually in King of Prussia, Trooper, Oaks, and other nearby communities will use the name, leading to some ambiguity on the actual location of the modern village.

There is a partial re-creation of the historic village from the time of the American Revolution that is located next door, and just within the outskirts of the park.

Valley Forge is known by travelers in the Philadelphia area as the westbound control city on Interstate 76 (the Schuylkill Expressway), as it is near where I-76 joins the Pennsylvania Turnpike. This remains, despite no exit being designated for Valley Forge, since the previous exit became the off-ramp to Mall Boulevard, serving King of Prussia.

Valley Forge is mostly known for the lending of its name to the encampment of George Washington's Continental Army during the winter of 1777 to 1778.

Audubon is a census-designated place (CDP) in Montgomery County, Pennsylvania, United States. It was named for naturalist John James Audubon, who lived there as a young man. The population was 8,433 at the 2010 census. 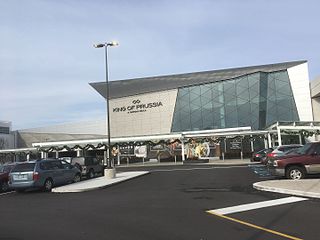 Upper Merion Township is a township in Montgomery County, Pennsylvania, United States. The population was 28,395 at the 2010 U.S. Census. Located 16 miles (26 km) from Philadelphia, it consists of the villages of Gulph Mills, King of Prussia, Swedeland, Swedesburg, and portions of Radnor and Wayne.

King of Prussia is the second largest shopping mall in the United States in terms of gross leasable area. It is an upscale mall with numerous retailers, anchored by Lord & Taylor, Dick's Sporting Goods, Primark, Neiman Marcus, Nordstrom, Macy's, and Bloomingdale's, with one vacant anchor last occupied by JCPenney. 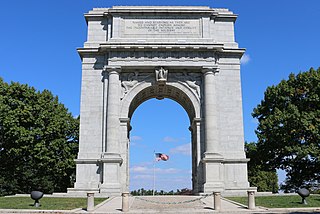 Valley Forge National Historical Park is the site of the third winter encampment of the Continental Army during the American Revolutionary War, taking place from December 19, 1777 to June 19, 1778. The National Park Service preserves the site and interprets the history of the Valley Forge encampment. Originally Valley Forge State Park, it became a national historical park in 1976. The park contains historical buildings, recreated encampment structures, memorials, museums, and recreation facilities.

The Schuylkill Expressway, locally known as "the Schuylkill", is a two to eight lane freeway through southwestern Montgomery County and the city of Philadelphia, and the easternmost segment of Interstate 76 in the U.S. state of Pennsylvania. It extends from the Valley Forge exit of the Pennsylvania Turnpike in King of Prussia, paralleling its namesake Schuylkill River for most of the route, to the Walt Whitman Bridge in South Philadelphia. It serves as the primary corridor into Philadelphia from points west. Maintenance and planning are administered through Pennsylvania Department of Transportation (PennDOT) District 6. Constructed over a period of ten years from 1949 to 1959, a large portion of the expressway predates the 1956 introduction of Interstate Highway System; many of these portions were not built to contemporary standards. The rugged terrain, limited riverfront space covered by the route and narrow spans of bridges passing over the highway have largely stymied later attempts to upgrade or widen the highway. With the road being highly over capacity, it has become notorious for its chronic congestion. An average of 163,000 vehicles use the road daily in Philadelphia County, and an average of 109,000 use the highway in Montgomery County, making it the busiest road in commonwealth of Pennsylvania. Its narrow lane and left shoulder configuration, left lane entrances and exits, common construction activity and generally congested conditions have led to many accidents, critical injuries and fatalities, leading to the highway's humorous nickname of the "Surekill Expressway" or in further embellishment, the "Surekill Distressway" or the “Surekill Crawlway". 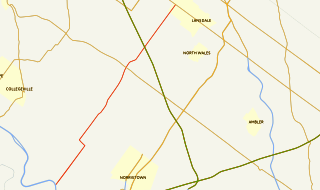 Pennsylvania Route 363 is a state highway located in Montgomery County, Pennsylvania that is a spur of PA 63. The route runs 11.86 mi (19.09 km) from an interchange with U.S. Route 422 near Valley Forge northeast to PA 63 in Lansdale. The route runs through suburban areas of central Montgomery County, passing some farmland in Worcester Township. PA 363 is designated along Trooper Road, Ridge Pike, Park Avenue, and Valley Forge Road. In the community of Worcester, the route crosses PA 73.

Oaks is an unincorporated community located in Upper Providence Township, Montgomery County, Pennsylvania, 18 miles (30 km) northwest of Philadelphia. Its boundaries are defined in large part by the village's position at the junction of Perkiomen Creek and the Schuylkill River.

Pennsylvania Route 23 is an 81.14-mile-long (130.58 km) state highway in southeastern Pennsylvania. The route begins at PA 441 in Marietta and heads east to U.S. Route 1 at City Avenue on the border of Lower Merion Township and Philadelphia. PA 23 begins at Marietta in Lancaster County and continues east to Lancaster, where it passes through the city on a one-way pair and intersects US 222 and US 30. East of Lancaster, the route passes through agricultural areas in Pennsylvania Dutch Country, serving Leola, New Holland, and Blue Ball, where it crosses US 322. PA 23 passes through the southern tip of Berks County and serves Morgantown, where a ramp provides access to Interstate 176 (I-176). The route runs through northern Chester County and serves Elverson, Bucktown, Phoenixville, and Valley Forge. PA 23 continues into Montgomery County and intersects US 422 in King of Prussia and US 202 in Bridgeport. The route follows the Schuylkill River to West Conshohocken, where it has access to I-76 and I-476, before it continues southeast through Lower Merion Township to US 1.

The Horse-Shoe Trail is a 140-mile (230 km) trail that runs from the western edge of Valley Forge National Historical Park westward toward Harrisburg, Pennsylvania. It ends about 15 miles (24 km) northeast of Harrisburg at the Appalachian Trail.

The Schuylkill Branch was a rail line owned and operated by the former Pennsylvania Railroad in the U.S. state of Pennsylvania. The line ran from the Philadelphia to Harrisburg Main Line at 52nd Street in Philadelphia north via Norristown, Reading, and Pottsville to Delano Junction. From Delano Junction, the PRR had trackage rights over the Lehigh Valley Railroad's Hazleton Branch and Tomhicken Branch to Tomhicken, where the PRR's Catawissa Branch began. In conjunction with the Catawissa Branch, Nescopeck Branch, and Wilkes-Barre Branch, the Schuylkill Branch gave the PRR a direct line from Philadelphia to Wilkes-Barre.

U.S. Route 202 runs through the southeastern part of the U.S. state of Pennsylvania, passing through the western and northern suburbs of Philadelphia. It follows a general southwest to northeast direction through the state, passing through or by West Chester, King of Prussia, Norristown, Montgomeryville, Doylestown, and New Hope. US 202 enters Pennsylvania from Delaware and heads north as a divided highway, where it becomes concurrent with US 322 at an intersection with US 1 in Painters Crossing. The two routes head north and become a freeway that bypasses West Chester to the east, with US 322 splitting from US 202. US 202 continues north and east along the freeway to King of Prussia, where it reverts to an at-grade divided highway following an interchange with Interstate 76 (I-76). The route becomes a one-way pair as it passes through Norristown before both directions rejoin and the road continues northeast. US 202 follows an expressway-grade parkway between Montgomeryville and Doylestown before bypassing Doylestown to the south along a freeway. The route continues northeast as an at-grade road to New Hope, where it crosses the Delaware River into New Jersey. 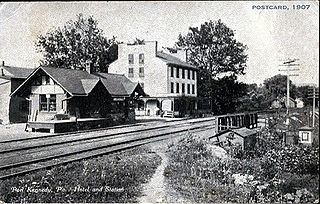 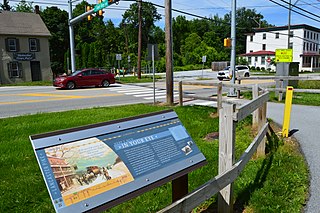 Chester Valley Rail Trail is a 13-mile (21 km) rail trail through the Chester and Montgomery counties in south east Pennsylvania. The west end is in Exton, while the east end is in King of Prussia. Phase 1 of the trail was funded by the American Recovery and Reinvestment Act of 2009. Phase 2 of the trail's construction has begun in an attempt to connect the trail's three sections, adding 7.6 miles (12.2 km). 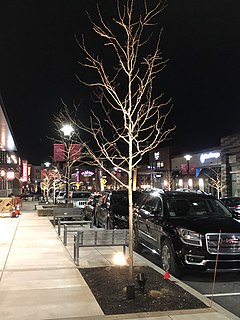